Two teenage girls, in leggings and $700 Canada Goose parkas, took iPhone videos of 115 or so rain-soaked protesters from inside an Italian market in Greenwich, Connecticut. “Oh my God!” they laughed. “Pay your taxes! Hahaha should I hashtag ‘Payyourtaxes?!? Oh my God, look at this! It’s soooo funny.”

Each demographic of Greenwich’s well-heeled set had a characteristic reaction to the demonstrators. Like their teen daughters, middle-aged women tended to treat the band of mostly minority 99%-ers as a spectacle—but a potentially dangerous one.

“The people here can be… a little out of touch,” Greenwich Police Department Captain Mark Kordick told me. “I had one woman in a brand-new Porsche wave me over as the protest was moving down the main street and ask me—and I quote—‘Is it safe to go shopping?’”

“So I said to her,” the 26-year department veteran continued, “‘Lady, the only danger is going to be to your credit rating.’”

On the morning of Saturday, March 14, three busloads of demonstrators pulled up to the glass-fronted Greenwich Public Library to “show ‘Hedge Fund Haven’ what angry working families look like.” A collection of labor unions and community groups, under the banner of the Strong Economy for All Coalition, helped organize the rally, dubbed the Hedge Clippers. No actual hedges were harmed in the making of this demonstration.

Rather, dozens of largely underprivileged New Yorkers marched from the library, rallied in front of the local JP Morgan outlet, and proceeded down the luxury-shopping artery of Greenwich Avenue. Past Tiffany’s, Saks Fifth Avenue, and countless cafes, they called on billionaires to “pay your fair share” and proclaimed that the public education system is not for sale.

“We’ve seen around the country that hedge funds are not a good deal for anyone—except the managers themselves,” organizer Jonathan Westin, director of activist group New York Communities for Change, told me at the rally staging ground. “They charge exorbitant fees literally from working families’ money. That shouldn’t be allowed. We’ve seen Warren Buffett question their effectiveness and hedge funds dropped by the largest pension fund in California”—also in America: the California State Public Employees’ Retirement System. “We’d love to see New York pensions do the same.”

Photo: Caleb OberstFor no clear reason, the Hedge Clippers protest targeted Paul Tudor Jones, billionaire founder of the private asset manager Tudor Investment Corporation. After the march down Greenwich Avenue, demonstrators regrouped and bussed roughly a mile to Jones’ gated community of Belle Haven. Although some media outlets reported that he was “the target of protesters on his front lawn,” police at the scene told me, “we’re not even close. You can’t see his house from here.”

Organizers gave the conflict between Jones’ Robin Hood Foundation—dedicated to ending poverty in New York City—and his reported $500 million spend on politically-tied organizations since 2000 as the justification for the targeted rally. By Hedge Clippers’ own analysis, his donations pale in comparison to Third Point CEO Daniel Loeb’s (upwards of $1 billion) or Tiger Management founder Julian Robertson’s ($1 billion). But like any good journalist knows, nothing carries a message like a narrative, and every story needs a villain.

Paul Tudor Jones’ demographic—the older, moneyed white men of Greenwich, Connecticut—showed no amusement at the dozens of poncho-clad protesters who took over their streets on Saturday. From the front table at a café, two of these sort sat eating lunch as the demonstration moved past. Over the back of one’s chair hung a McLaren Formula One racing jacket. Turning to look at the passing protest, it was clear he had no desire to hashtag the event. Likewise, the driver of a luxury SUV, forced to interact with demonstrators walking along on a narrow Belle Haven road, pushed past with his eyes locked straight ahead.

“It’s like we’re invisible,” a soaked woman with long dark curls said to me, shaking her head. “They won’t even look at us.”

Ask any institutional CIO what the worst part of their job is, and you’re likely to hear the same answer: Politics.

No one becomes an institutional investor to play diplomat or legislative booster. “Balancing the needs of many stakeholders”—an on-the-record CIO’s euphemism for the P-word—is the price many pay to practice their art: balancing a portfolio and the financial needs of an institution. Demonstrations like Hedge Clippers count as one more signal of political pressure—particularly those for those in the public sphere—that threaten to undermine institutional investors’ mission of achieving the best risk-adjusted returns for members.

Many hedge funds and private equity operations have performed spectacularly in this respect. Down the road from Greenwich in Westport, Connecticut, Bridgewater Associates earned an estimated $36 billion for institutions invested in its Pure Alpha fund between 1975 and 2012. Jones’ flagship fund, Tudor BVI Global, has returned nearly 19.5% annually. Former New York City Retirement Systems CIO Larry Schloss favored hedge funds for institutional portfolios because of their very structure. “My definition of alignment is, 'How much money can the manager lose when I lose?',” he told CIO in 2013. Unlike traditional asset managers, with alternatives the answer is “a lot.” Perhaps everything. 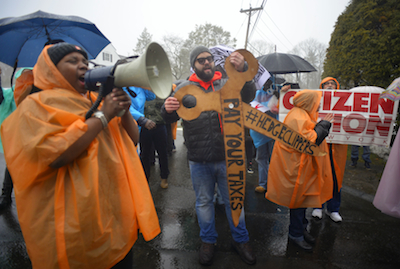 Photo: Caleb OberstBut asset owners are also true experts in incentives. They meticulously devise compensation structures to maximize alternatives managers’ desire to perform. What CIOs never mention is one of the largest incentives driving American hedge fund and private equity managers today, and something that’s also among the protesters’ biggest complaints: the carried interest tax. For individuals in alternative asset management, this federal law caps taxation on long-term investment gains at 20%. If it disappeared, as the Hedge Clippers shouted for on Saturday, managers would see their profits cut nearly in half. Anyone making more than $432,201—a.k.a. any successful manager—would fall into the top federal tax bracket and pay 39.6%. Relative to almost anything else, hedge fund and private equity professionals have the highest incentive to protect this rule—or loophole, as some refer to it.

As much as asset owners broadly wish to keep out of these debates, if they’re paying performance fees as they so hope to, it’s only reasonable to expect that some of their managers are also paying to protect their own interests. In that sense, institutional capital allocated to alternatives cannot help but be political, putting asset owners on a proxy collision course with the likes of the Hedge Clippers. 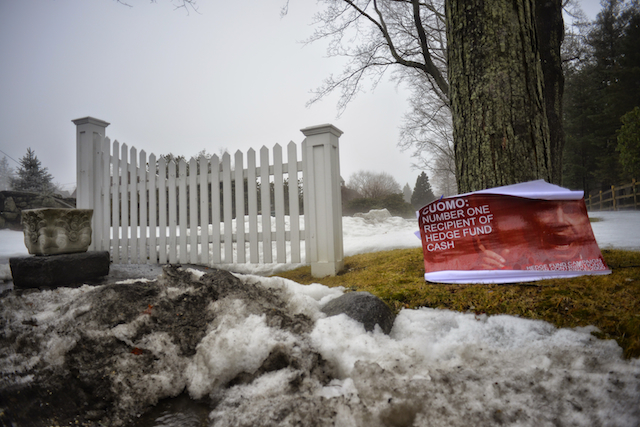 Photo: Caleb Oberst “I wasn’t making $1 million a day, and I paid 50% taxes,” retiree Anslen Carter, 69, told me as the rally wrapped up. “I spent 27 years working in aircraft maintenance at John F. Kennedy Airport. If we don’t pay taxes, we go to jail. These guys hardly pay taxes, and they get to live here. They’re legal crooks.” Carter shook his head. “It’s not fair.”

But Police Captain Mark Kordick has seen this all before. “We’ve been getting protesters here since the ’80s,” he said as he drove me and my photographer back to the library, marking the first (and hopefully last) time a CIO employee has been in the back of a cruiser on the job. “The gated communities don’t like it, but there’s not much they can do: It’s public property.” I asked what he thought, as a public employee, of pension money bankrolling the Belle Haven estates.

“Funny you should ask, because for the last 14 years I’ve been an employee representative to the city’s $400 million pension board,” Kordick said. “Technically we don’t have allocations to true alternative investments—but that’s not to say I’m averse to it. We invest the money in a way to solely maximize returns on a risk-controlled basis. Now get out of the car.”

« What Do Snoop Dogg and CalSTRS Have in Common?