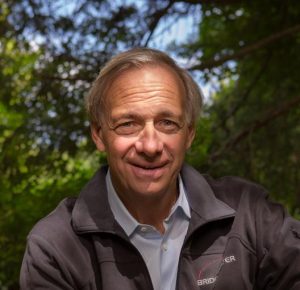 Ray Dalio is hanging it up as head of the world’s largest hedge fund firm, Bridgewater Associates. The billionaire investor and public philosopher, who founded the company in his New York apartment in 1975, put together an extraordinary run.

Dalio has gradually been edging away from the daily running of Bridgewater. On social media, he said he has transferred all of his voting rights to the board of directors and stepped down as one of Bridgewater’s three co-CIOs. He said his future role at the company (assets: $150 billion) will be “founder and CIO mentor.”

“Over the last two years I have watched and mentored them so they could run Bridgewater without my interference and they did a great job,” he said in a LinkedIn post, of the people who will run Bridgewater going forward. Co-CEOs Nir Bar Dia and Nark Bertolina, plus co-CIOs Bob Prince and Greg Jensen, will run the firm.

Dalio, 73, was one of the first to construct portfolios of uncorrelated investments and he put a big emphasis on research. He famously foresaw the global financial crisis and kept his investments out of harm’s way. Dalio cleaned up from the crisis by investing in Treasury bonds. He had some rough times in the 2010s, but then came roaring back. Forbes estimates that his fortune now is worth $20 billion.

Bridgewater’s flagship fund, Pure Alpha II, has romped this year by shorting stocks in Europe, where equities are hit hard by energy shortages and other problems from the Russia-Ukraine war.

In June, the Pure Alpha fund reportedly doubled its short positions in European shares, to $10.5 billion. Its targets were said to include German software maker SAP and French health care company Sanofi. In addition to shorting, it has scored from trades in commodities, sovereign debt and emerging market currencies. Dalio also is known for his advocacy on investing in China and has attracted criticism for downplaying its human rights violations.

The hedge fund honcho has penned several books outlining his economic and management philosophies, which among other things stresses feedback and candor from everyone in an organization, regardless of rank. His latest book, Principles for Dealing with the Changing World Order: Why Nations Succeed and Fail, sketches out why the U.S. became the world’s richest economy.

He has active philanthropic interests that he intends to devote more time to, in particular his own charity group, the Dalio Foundation.

Dalio, Making the Case for Pessimism, Has Thrived This Year by Selling Short

Ray Dalio Is Now Ranking Economies by Their Strengths and Weaknesses