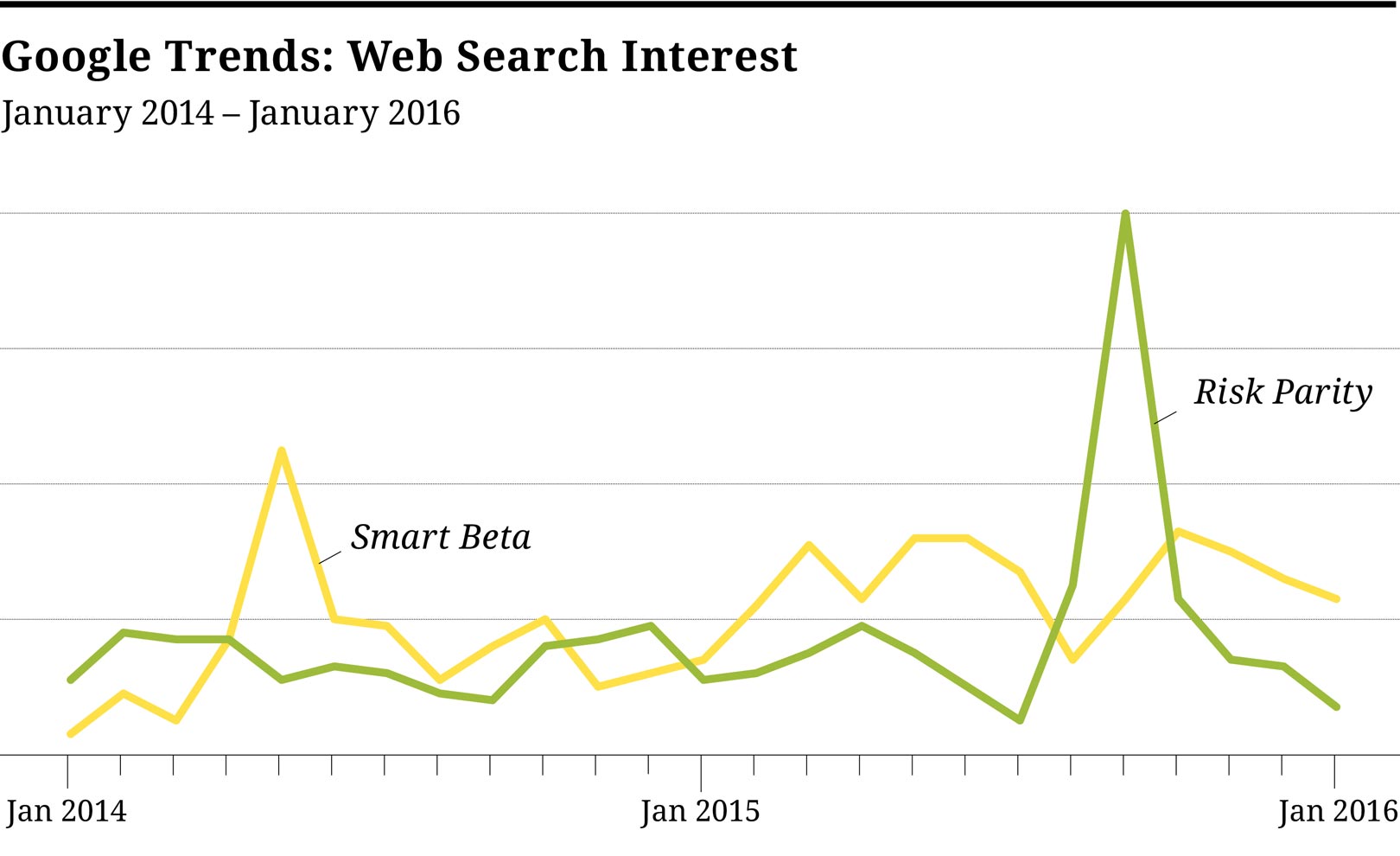 A year and a half ago, CIO took the pulse on industry buzzwords: The trends and phrases that dominated shop talk, according to asset owners, managers, consultants, and industry experts. What flamed out—and what has embedded into daily institutional thought?

Nineteen months have passed since then, and the investment landscape has changed. For the many skeptics of risk parity, smart beta, and outsourced-CIO (OCIO) circa June 2014, their evolution will have come as a shock.

First, risk parity. The last year has proven “long and painful,” according to AQR Founder Cliff Asness. Modeled risk parity strategies would have grown steadily for nearly 70 years, backtests show, gaining cumulative excess returns over cash of around 500% by 2015 from 1947. None of that is thanks to the last year and a half, where it clocked in among the worst of any investment strategy. The levered-bond approach lost 5.4% in the year ending June 30, 2015, according to consulting firm Redington—leading only commodities, which is a low bar at negative 24% over the same period.

And yet, historically awful performance coincided with risk parity edging into the establishment. The strategy delivered on its promises amid stock market crashes and rallies, defenders argue.

“We continue to advocate risk parity,” says Brad Smith, a partner at consulting firm NEPC. “Over the long term, it will outperform a 60/40 allocation and improve risk-adjusted returns.” Data confirms that as the strategy grew in prominence, so did its investors—and their asset size. The percentage of users with $15 billion or more under management jumped from 14% in 2011 to 47% in 2015, according to CIO’s latest survey. Investors with less than $500 million in their coffers—and perhaps with fewer resources than their larger peers—fell from 16% of users in 2011 to just 2%.

Risk parity Godfather Bridgewater Associates and its Co-CIO Bob Prince also trumpeted the strategy’s ability to deal with choppy stock markets. In August 2015, as the stock market experienced a correction, Prince told CIO that falling equities would have “little impact on our All Weather portfolio, and we would be earning the higher risk premiums which now exist.” (According to Forbes, the All Weather fund lost 7% in 2015, its second annual loss in three years.)

Risk parity also became a familiar phrase on Wall Street—and in the media—as some pointed fingers at the strategy for bringing down the financial markets last August. Google searches for ‘risk parity’ shot through the roof in August, bringing up headlines such as “US Asset Manager Warns Over ‘Risk Parity’.” Risk parity also reached Main Street, says consultant Joe Nankof, a partner at Rocaton. The strategy migrated to mutual funds and exchanged-traded funds (ETFs) for smaller—and even retail—investors.

However, the landscape may be changing for risk parity providers—strategies that have worked in the past are not working today, NEPC’s Smith warns. “There is a significant market dislocation for risk parity right now, which opens up room for firms and strategies that can be complementary to standard pure beta plays,” he continues. “There are a lot of products out there with a smart beta theme that have merit. It is a good time for nontraditional and tactical risk parity managers with active views on the strategy.” 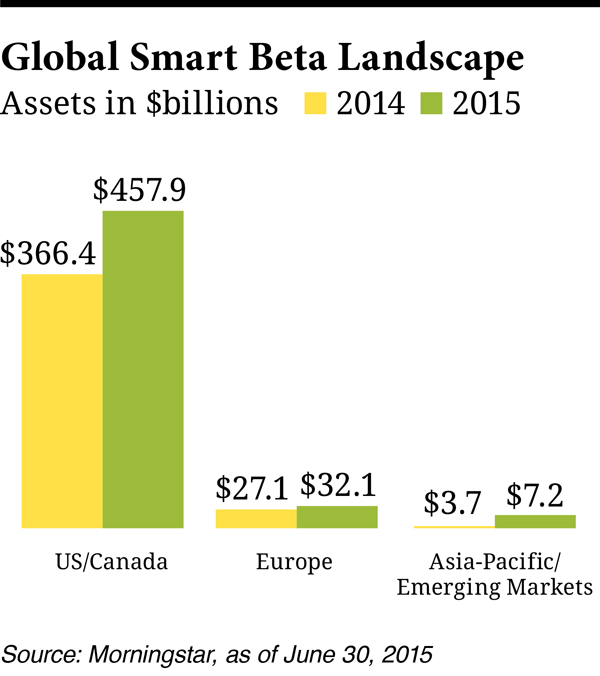 Smart beta likewise exploded in popularity over the past two years. According to Willis Towers Watson’s latest data, its institutional clients allocated more than $8 billion to smart beta strategies globally in 2014. Total client capital reached $40 billion, double the assets of two years prior. Morningstar also reported 844 global smart beta ETFs collectively representing $500 billion in assets as of June 30, 2015—a substantial jump from 673 products and $396 billion in 2014. The research firm attributed the growth to new inflows, product launches, and a host of new providers entering since 2013. Search traffic for ‘smart beta’ also steadily increased since January 2014, according to Google Trends data.

Although the data point to smart beta’s steady and rising position in institutional investing, smart beta still remains one of the most debated strategies, largely thanks to its controversial name. Rocaton’s Nankof—who was also interviewed for CIO’s initial buzzword survey—says he remains unchanged about smart beta. “I still see it as a repackaging of a concept that’s been around for ages,” Nankof argues. “What providers sell as smart beta is synonymous to factor investing. The factors themselves will always continue to persist; smart beta’s label… won’t.”

Nankof also sees a major shakeout ahead, due to finite factors with demonstrated track records. “There’s going to be a limited group of providers offering cost-effective factors,” he predicts. “There simply isn’t enough room in the industry for hundreds of providers.”

Finally, OCIO has also established itself as a secular trend over the past two years, despite only 42% of asset owners voting that outsourcers were here to stay in 2014. Not convinced? Take a look at the asset-owning talent that jumped to OCIOs. Most recently, Alaska Permanent Fund’s chief Jay Willoughby left to lead The Investment Fund for Foundations (TIFF), a Harvard endowment vice president moved to Perella Weinberg Partners’ OCIO business, and Vanderbilt’s risk chief Bola Olusanya joined Strategic Investment Group.

CIO’s 2015 OCIO survey also revealed an uptick in the percentage of investors of all sizes who handed over their entire portfolio, from 48% in 2014 to 57% in 2015. The number of investors reporting they outsourced less than 25% of their assets also fell significantly over the same period. 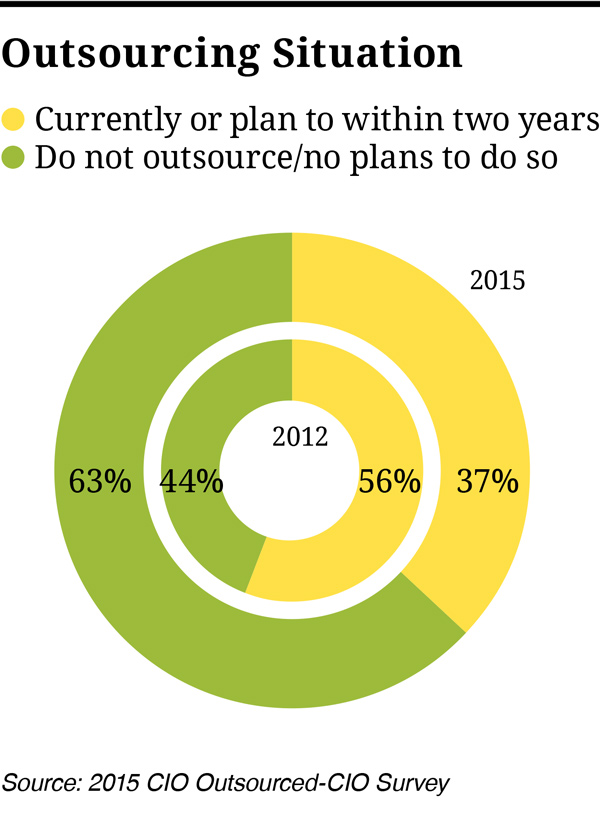 But consultants—those who also offer OCIO service—say the best is yet to come. “Opportunities are continuing to grow rapidly and we think that market environments in 2016 are only going to reinforce that trend,” says Ed Omata, Meketa Investment Group’s principal. “Market volatility will highlight the benefits of an OCIO structure providing more room for tactical moves that allow clients to be more opportunistic. It also highlights the limitations of a traditional investment operating model: the quarterly board meetings and governance structures.”

OCIO’s bull market is not limited to the outsourcers themselves, adds Meketa’s Aaron Jamieson. The increase in overall demand has created lucrative market for intermediaries—or matchmakers—between the OCIO and asset owners, such as RV Kuhns, Cortex Applied Research, and InHub. “These firms help investors with their governance structure, educate them on the ideal level of discretion, and ultimately conduct the search and help through the process,” he continues.

Risk parity, smart beta, and OCIO have all established strong roots—for now. However, consultants predict a shakeout of some form or a natural evolution in strategy in all three spaces, raising the question… Who will survive?