Hedge funds: Never a contender for winning a public popularity contest, to be sure. But over the last few months, prevailing sentiment among the masses towards the industry has roughly tracked Democrats’ feelings for Donald Trump. In other words, plummeting from ‘disdainfully ignored’ to ‘gleefully vilified.’

Headlines in newspapers, magazines, blogs, and even Gawker, have splashed pronouncements that hedge fund managers are failing to do what they are meant to do—and what they are paid extraordinarily well for. (My personal favorite: Gawker’s “Hedge Funds Don’t Do S&%$, Suck.”) These managers charge 2-and-20 fees, these articles argue, but they’re not generating alpha through active management.

If in fact hedge funds behave like passive strategies, why would investors pay 2-and-20 for the same exposures?

Indeed, 2014 was the worst year for hedge funds, regardless of managers’ skill, according to analytics firm Novus. They faced historically low rewards for their abilities (if any) to outperform indexes, thanks to the markets’ low volatility and tight spread in performance. HFR data showed a total of 904 hedge funds closing up shop in 2014, with industry returns averaging 5.5% while the S&P 500 gained 12%.

“In 2014, a portfolio manager could have been just as good as timing the market, or picking winners and losers, or sizing those positions effectively as she’d always been, but the returns from an alpha-generation standpoint won’t show it,” said Joe Peta, managing director at Novus, in January.

Furthermore, one study by Mikhail Tupitsyn and Paul Lajbcygier of Australia’s Monash University claimed most hedge funds—despite using “dynamic trading strategies involving complex securities” over the short term—will behave like smart beta products over the long run. Only one-fifth of more than 5,500 hedge funds from 1994 to 2010 displayed nonlinear exposures to risk factors that drive hedge fund returns, the authors found.

This last comparison of hedge funds to alternative beta products may be especially troubling news to the Greenwich, Connecticut set. If in fact hedge funds behave like passive strategies, why would investors pay 2-and-20 for the same exposures?

According to Towers Watson—one of the early adopters of smart beta—interest in these more “passive” strategies has ballooned over the last few years. The firm’s institutional clients allocated more than $8 billion to smart beta strategies globally in 2014, it said. Total client capital hit about $40 billion, double the figure of two years prior. (Towers Watson doesn’t design their own smart beta strategies, but rather advises clients to allocate to those managed by a third party.) Towers Watson’s clients have plenty of company. Smart beta funds exceeded half a trillion dollars under management in 2015, according to Morningstar data, up from $200 billion in 2011.

“Smart beta has been gaining momentum since the financial crisis,” says Fabio Cecutto, Towers Watson’s head of multi-region equity manager research. “But the last three years have shown an explosion in appetite for two reasons. First, it is difficult to harvest efficiency through simple market exposures—investors are having to become more creative. And second, there is an increased focus on cost and transparency. Investors want strategies that can capture different risk premiums with having to pay 2-and-20.”

And so they’re diving head first into smart beta, but they’re not alone. Like any hot investing trend, savvy (or lucky) investors reach the elite managers with their capital first, then come the institutional hoards with theirs, and finally, hot on their heels are more managers, jumping in with their products for a piece of the windfall.

“We’ve been seeing some blurring of smart beta providers,” Cecutto says. “Index providers are entering the space with indexes; passive managers are tracking these indexes; and active managers are developing their own strategies. Not to mention advisory firms that collect various smart beta strategies intelligently, assemble them in a diversified portfolio, and pull them into a single fund. Everyone is a proponent.” 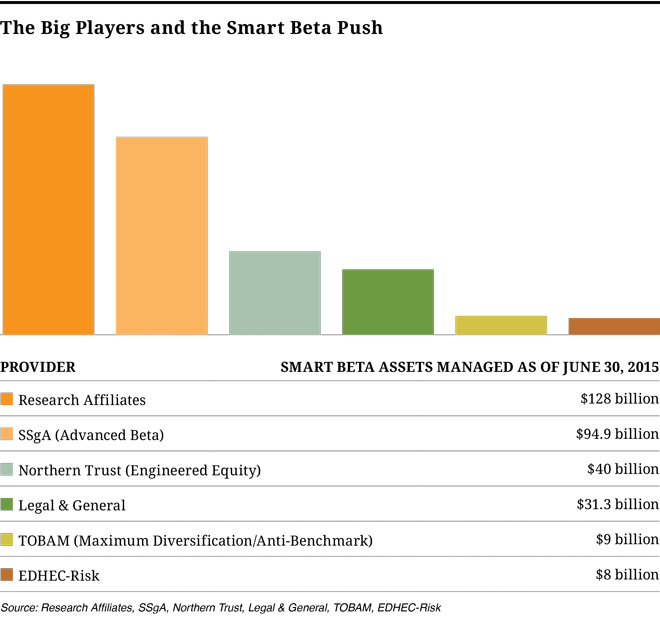 Even measuring smart beta assets managed by individual firms is a complicated task, Cecutto adds, due to chances of overlap and double-counting advised strategies and proprietary ones. But a proliferation of products means a spectrum of options between alpha and beta.

“It’s been exciting to watch how the fundamental index opened the door for an array of smart beta strategies, some of which hadn’t gained traction before.” Research Affiliates, one of the first movers into the space, blew open the door with its fundamental index in 2004. It now boasts $128 billion in smart beta strategies across exchange-traded funds, comingled funds, and mutual funds—plus one of the sector’s longest track records. Yet the firm continues to push forward, making headway in equities, fixed income, and commodities.

“It’s been exciting to watch how the fundamental index opened the door for an array of smart beta strategies, some of which hadn’t been gaining traction before,” Rob Arnott, founder and chairman of Research Affiliates, says. “Factor investing has been around for ages: equal weighting goes back to the early ’90s; minimum variance to the ’70s. The notion of alternative index has roots that go so far back. But fundamental index—and smart beta—is taking it a step further and severing the link between stock price and its weight in the portfolio.”

Arnott says his Newport Beach, California-based firm aims to retain most of the advantages of cap-weighted indexation—such as high capacity, low turnover, strong liquidity, transparency, and the ability to backtest—while “contra-trading against holdings whose market capitalizations have risen relative to their economic size.”

State Street Global Advisors (SSgA) is one of the largest and oldest smart beta implementers, with nearly $95 billion running the gamut from equal-weighting to factor-tilted portfolios. The Boston-based firm calls its approach “advanced beta,” and says systematic factors in both equity and fixed income could hit the sweet spot between active and passive investing. And the key to their function is the support from nearly $2 trillion in passive business.

“We have implementation capabilities, scalable trading activities, risk oversight, operational and technology investments that all back up our smart beta approach,” Lori Heinel, chief portfolio strategist at SSgA, says. “We often joke about it, but we implemented our first smart beta strategy in 1993.”

The business has become a little bit more complicated for SSgA since then. The team is exploring smart beta options on the fixed income side, often co-developing products with consultants’ input, and developing custom projects for certain clients.

“We are looking to replicate patterns of hedge funds at attractive price points while implementing the roots of smart beta,” Heinel explains. “The bulk of the performance would be achieved through quant-based strategies. Again, we’re hoping to leverage State Street’s heritage, combining research in active quant and smart beta strategies as well as implementation capabilities and trading platforms.”

However, mimicking hedge fund strategies may not be as easy as their recent performance suggests, and is perhaps only possible for behemoths like SSgA.

“In order to capture alternative betas, the use of complex alternative investment techniques is necessary,” consulting firm bfinance said in a recent paper. “Manager skill is required on both the definition and implementation of these strategies, which may involve frequent trading, leverage, shorting, and derivative use.”

Smart beta may be increasingly  encroaching into hedge funds, but active managers aren’t panicking yet.

According to Northern Trust, nearly 70% of managers believe the rise of passive strategies would not have an effect on alpha generation. Almost all respondents said their active management businesses have been unaffected or modestly affected by the uptick in passive strategies. A mere 4% perceived significant damage.

Plus, they forecasted a slow demise of smart beta: Only 9% expected the hot strategy to take hold of a significantly greater market share over the next five years. Then again, smart beta isn’t about to win a popularity contest held by traditional active managers.

« Women in Alts Find No Favor Despite High Performance