If you were a corporate pension plan tied to the S&P 500 in January, you had a pretty good time.

Global equity markets were up about 8% last month, helping raise the average funded status from 83.8% to 85.9%, according to Northern Trust. The Federal Reserve, which troubled markets last year with interest rate hikes, lately has signaled it will be “patient” at its January meeting, which set the stage for January’s rally.

Funding ratios had fallen in Q4 2018 due to the Fed’s rate hikes and September’s selloff, but recovered some in January. Lower discount rates also helped, as the average rate dropped from 3.91% to 3.75% at the start of the New Year. 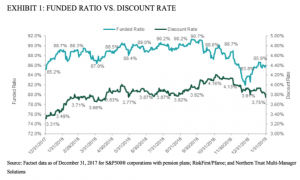 “After the sharp decline in growth assets during Q4 2018, we saw a nice rebound in January led by the equity markets,” said Dan Kutliroff, head of Northern Trust’s OCIO Business Strategy. “Continued strong economic fundamentals in the US and the Fed’s dovish tone contributed to the recovery.”

Funding ratios were still down from the year prior, when they reached 88.7% in the previous January. They peaked in September at 90.7%.

Although funding status differs from plan to plan due to factors such as asset mix, plan status, and funding history, the financial industry had the highest ratio at 97%, according to Factset data. Telecom and energy tied for lowest, at 79%. 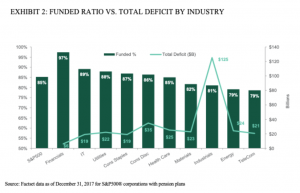