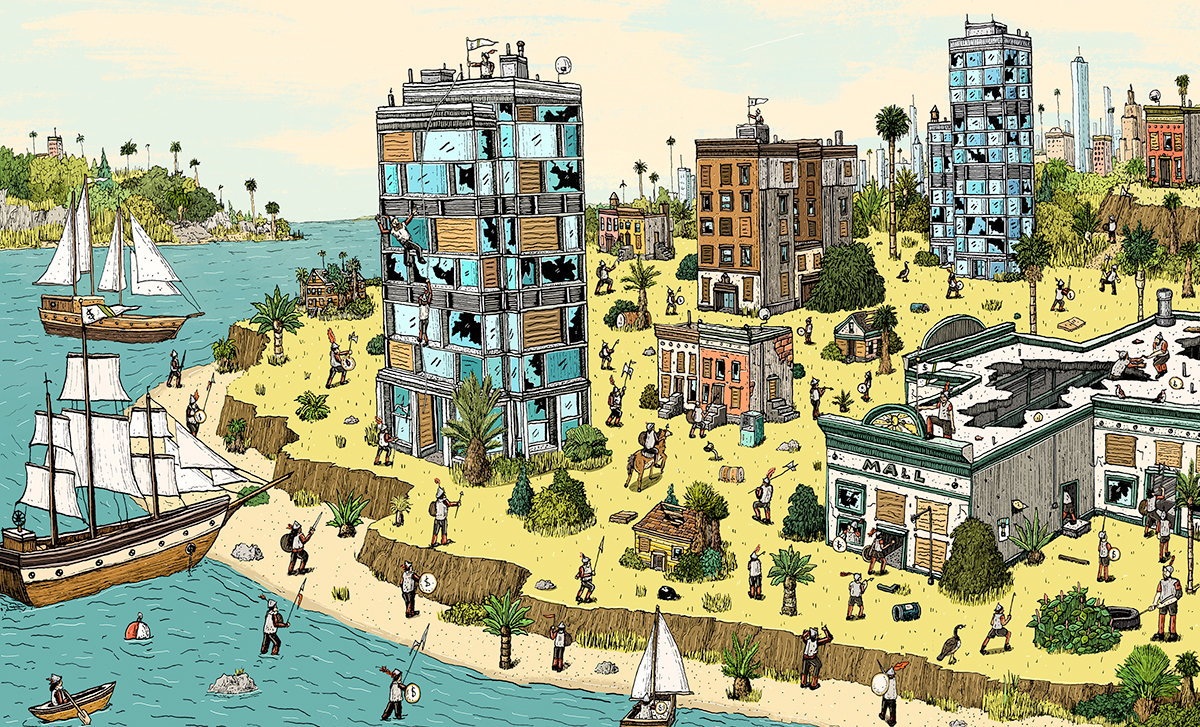 The most hazardous territory in the commercial real estate market—where the properties can’t meet their debts amid lagging rents, or are headed that way—is an aching problem for their owners. And a tantalizing opportunity for intrepid investors willing to venture into this blighted landscape.

Distressed investing isn’t a starkly visible presence in the commercial real estate (CRE) world. Not quite yet, anyway. But large investing firms such as KKR, Apollo Global Management, and Blackstone Group are amassing sizable funds to buy these damaged assets and sometimes the debt that supports them, as well.

Pension plans and other institutions are slowly, quietly buying positions in these funds. By all accounts, this is a nice, if risky, opportunity for them. The affected properties’ prices have begun to slide, spelling bargains for the the bold, who hope to capitalize on turnarounds.

More and more properties are entering the distressed category, although this has been a slow-motion process. “There is often a lag when economic distress manifests in rent and occupancy declines,” wrote Victor Calanog, head of CRE economics for Moody’s Analytics Real Estate Information Services (REIS).

Helping the lag: Washington since last year has offered aid to wounded businesses, in the form of grants and low-interest loans. And residential real estate has been granted a freeze on foreclosures, called “forbearance.” While CRE isn’t covered per se, this spirit often extends to commercial buildings, according to real estate experts.

The result is a postponement of crackdowns on borrowers. A lot of lenders regard CRE loan delinquencies as a temporary phenomenon. “They think, ‘These guys were good to us before the pandemic, and now the vaccines are coming,’” observed Paul Norris, Conning’s head of structured products. If lenders foreclose now, “they’ll lose money.”

Amid the plummeting prices, a floor exists somewhere, because of all the distressed capital coming into the picture. Private real estate debt funds raised some $20 billion last year, the most of any strategy, by the count of data firm Preqin.

Nevertheless, some properties could take a long time to spring back. Those are the ones the distressed funds are eyeing the hardest. Retail, especially the much-endangered shopping mall, was on the downswing even before the pandemic.

Other real estate is imperiled owing to COVID-19. Offices are in extremis because of the uncertainty surrounding whether companies will need as much space in the future, now that people have a taste for working at home. And lodging has gotten hammered by the drop in travel, although an uptick has appeared lately thanks to growing inoculations. The question for hotels, especially in cities, is whether business travel will bounce back in the age of Zoom.

Large banks, still smarting from the shellacking they took in 2008 and under Federal Reserve capital constraints, aren’t eager to ride to the rescue of limping CRE. “We’ve seen a dislocation in capital markets as traditional lenders,” meaning money-center banks, “have stepped back,” said Joshua Pristaw, head of capital markets at GTIS Partners. That’s where the new cavalcade of distressed investing funds comes in.

For example, real estate investment firm GTIS just made a $146 million loan to help a new condo tower called The Kent, in New York, where the pandemic has keelhauled the property market. Only half of the 104 units have been sold, so GTIS’s money gives the project some breathing room until the health threat has ebbed. The firm emphasizes that it doesn’t consider The Kent “distressed.”

But the annals of financial winners are festooned with those who bought ailing assets cheap and profited mightily as the investments improved, often with the aid of some tough workouts. Such CRE distressed funds have scored annual returns in the low teens in the past.

Famously, after the 2008-09 financial crisis, Blackstone bought thousands of foreclosed residences and turned them into rentals for its subsidiary, Invitation Homes. The strategy was a marked success.

The private equity titan paid $4 billion for 24,000 homes. Invitation, now the US’s largest single-family-home landlord, is solidly profitable. In 2017, Blackstone took the company public as a real estate investment trust (REIT), and later sold off its position for a major gain.

Bent on replicating that coup, Wall Street has set about raising funds to gobble up hurting CRE property. In June, Rockpoint Group, a real estate investment company, launched an “opportunistic” fund—i.e., one dedicated to undervalued properties—raising $3.8 billion. That haul handily exceeding its $3 billion target. Among the investors is the Florida State Board of Administration (SBA), which as of last summer had $4.1 million in the entity.

While the larger pension programs have real estate staff, the appeal of farming out this strategy to CRE pros is strong, regardless of size. That’s why the New Mexico State Investment Council (NMSIC) recently plugged $75 million into the new KKR Real Estate Partners Americas III. “KKR has good experience and a track record,” said Robert “Vince” Smith, the sovereign wealth plan’s CIO.

KKR, which has about $16 billion in real estate, is raising money for this partnership (with a $3.5 billion goal, it would be the firm’s largest CRE effort ever), focusing on what it calls “cyclical dislocation,” i.e., economic damage brought on due to the virus.

The firm is making the rounds to pension programs and other institutions. Earlier this month, for instance, it made a presentation to the San Diego City Retirement System (SDCERS), which agreed to pony up $30 million. KKR’s two previous distressed CRE funds—one starting in 2013, the other in 2017, have clocked annual gains of 11.6% and 15.7%, respectively—adding credence to its appeal for the new endeavor.

Apollo Global Management, which has $34 billion in real estate assets (7.5% of its total), is raising money for property deals in the US and Asia, a good number of them for distressed situations. In its recent earnings conference call, company co-founder Marc Jeffrey Rowan crowed about how “we have an immense real estate footprint” that only will become larger. “We have a lot of white space” to be filled, said Rowan. The company does not break out its profitability for the real estate sector.

Apollo has agreed to pay $2.25 billion for an ailing set of resort properties owned by the late billionaire Sheldon Adelson’s Las Vegas Sands, which includes the Venetian casino-hotel in Vegas, as well as ones in Macao, Singapore, and Bethlehem, Pa. The real estate operating company lost $300 million in its last quarter, as virus-spooked gamblers and other tourists stayed away.

The Federal Reserve, in its semi-annual report to Congress, expressed concern that distressed commercial properties were about to run into significant trouble. For now, prices have dropped, but high vacancy rates thus far haven’t registered a significant impact. The fear, the Fed report said, would come true if “the pace of distressed transactions picks up or, in the longer term, the pandemic leads to permanent changes in demand.”

Hovering over everything is $430 billion in commercial property debt that is due to mature this year. US banks lost $110 billion on commercial real estate in the last financial crisis, at least one-quarter of their total losses, according to Oxford Economics.

Office space, the largest single portion of the CRE realm, is seeing rents fall as vacancies rise. Property values eventually could plummet 20% to 35%, according to a recent Barclays report. Hotels and retail properties have been hurt even more. Other than fortunate pockets like warehouses, CRE stinks all over.

Distressed CRE loans—defined as borrowers having difficulty paying interest and principal—hit 8.2% as of year-end, and they are expected to keep climbing, according to research firm Intex Solutions. That’s more than double the rate in 2019. In 2009, distressed loans hit 12.6%. 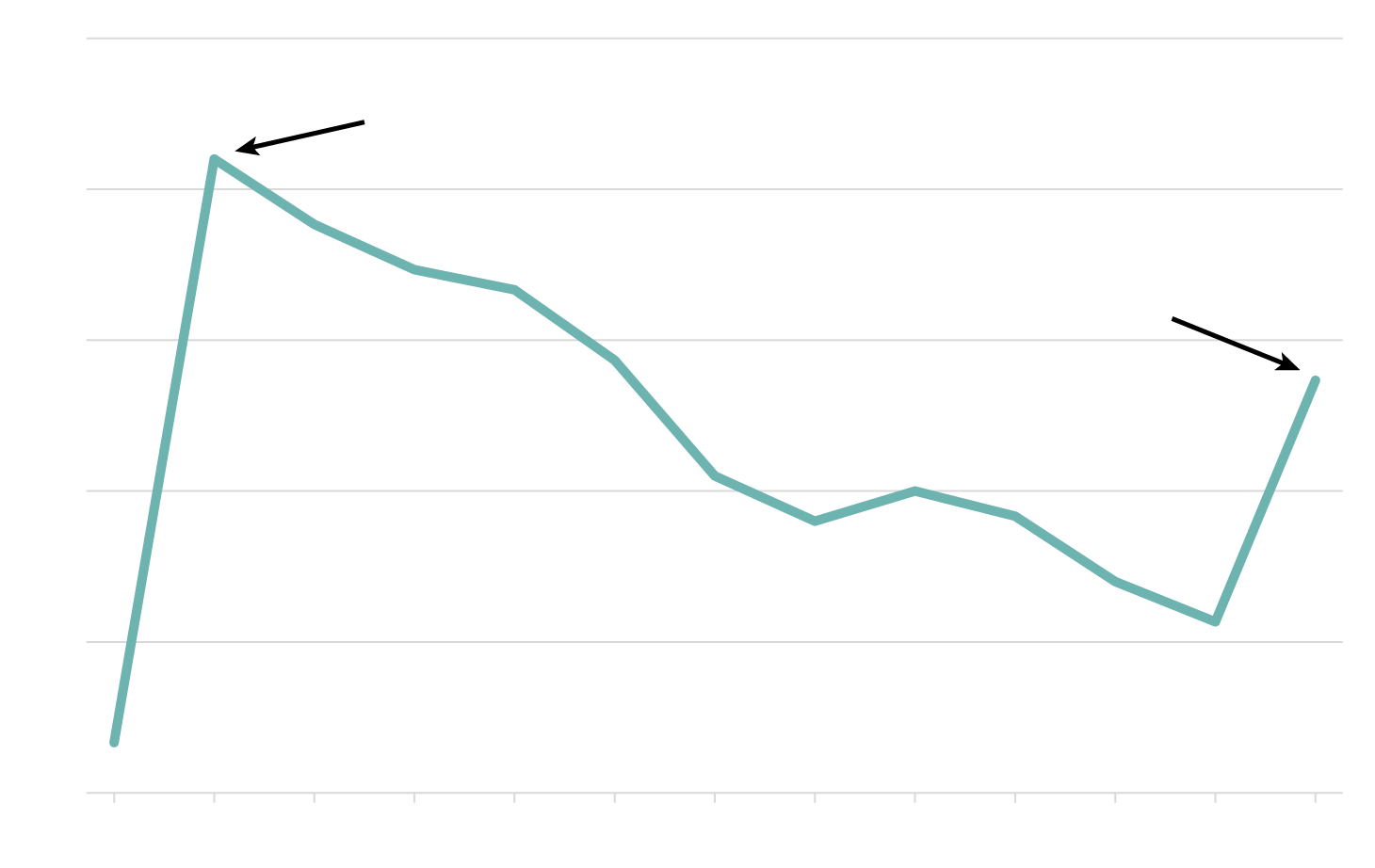 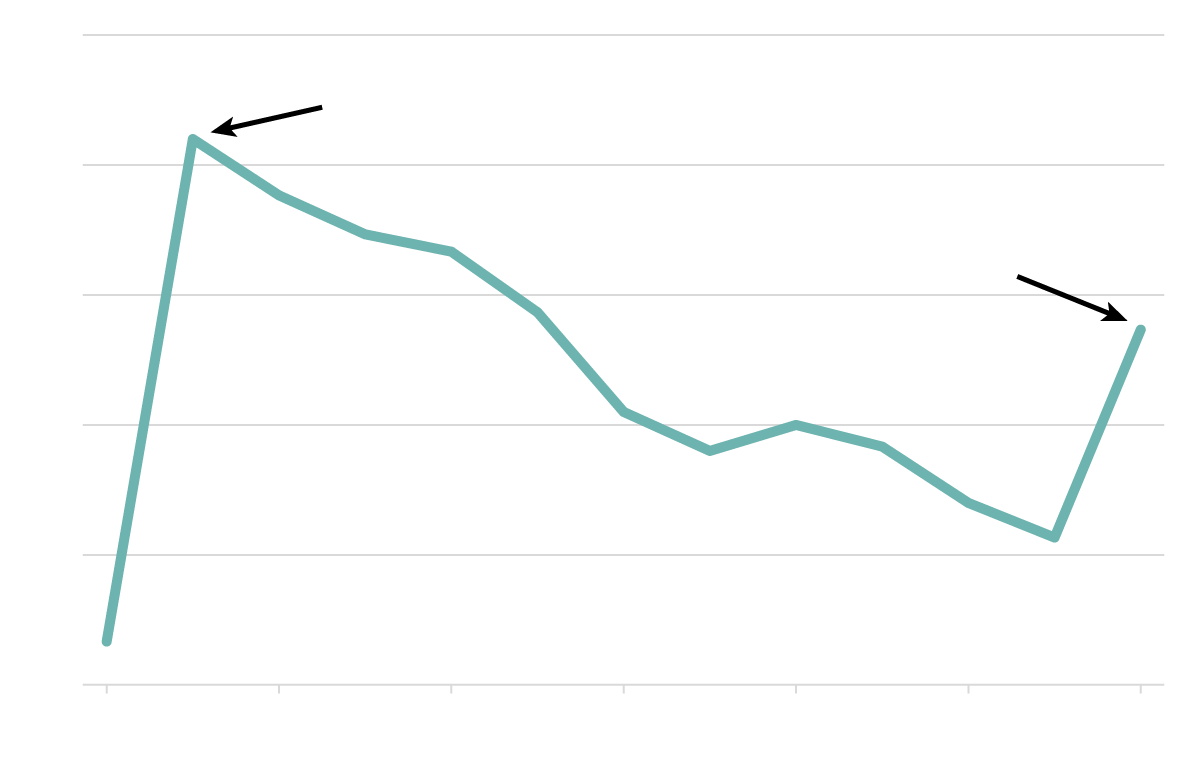 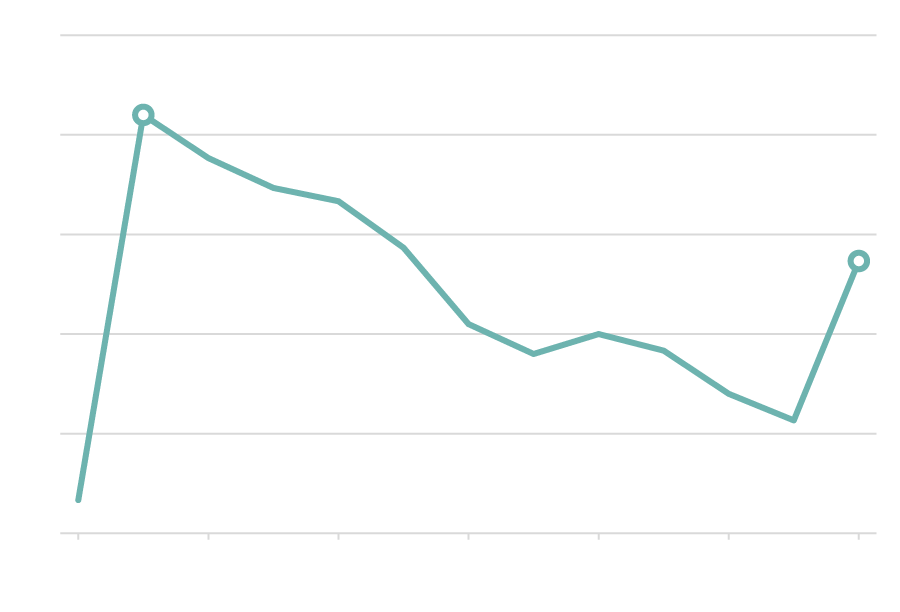 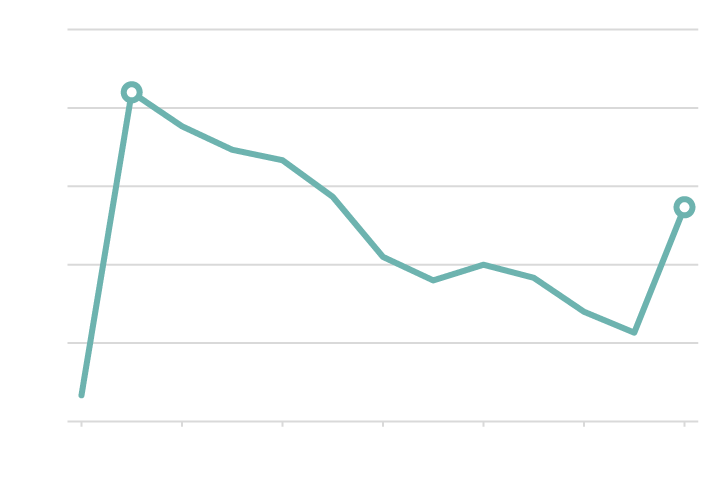 *Troubled Loans: Borrowings that are having trouble servicing interest and principal payments, also known as in ‘special servicing’

Property values for offices, lodging, and retail real estate may not touch bottom until mid-2021, declared CBRE Group, the real estate services firm. And recovery? Not until next year at the earliest. Research outfit Green Street found that office leasing activity last year got cut in half.

Other signals of distress have cropped up in the $529 billion market for CRE-backed bonds. The delinquency rate at year-end 2020 for commercial mortgage-backed securities was 20% for hotels and 14% for retail, according to Trepp, the financial data provider.

Big names are feeling the heat. In September, Barry Sternlicht’s Starwood Capital lost control of seven shopping malls it bought for $1.6 billion in 2013. When Starwood defaulted on the mall debt, bondholders took over the holdings. Privately held Starwood couldn’t be reached for comment, but it has said in the past that these malls were only a fraction of its assets.

One of the Starwood shopping centers, the almost 1-million-square-foot Louis Joliet Mall outside Chicago, defaulted on its $85 million loan last March, after two of its anchor tenants, department stores Carson’s and Sears, shuttered their outlets. The two remaining anchors, JCPenney (now exiting Chapter 11) and Macy’s (which barely avoided a bankruptcy filing last year by securing some funding), are struggling.

In New York, Jared Kushner, former White House aide and Donald Trump’s son-in-law, is on the hook for a $285 million loan on a half-occupied building that once housed the New York Times. Back when he inked the loan, the building was valued at $470 million. Last year, the property got re-appraised at $92.5 million, a daunting 80% haircut. Wells Fargo reported that foreclosure proceedings have started. Kushner couldn’t be reached for comment.

Certainly, the current travail is cyclical and eventually capitalism’s creative destruction will put things right. Until then, pain will mount, and fortunes will be made.

« Special Report: How City Office Centers, Written Off as Relics, Will Return, Post-Pandemic