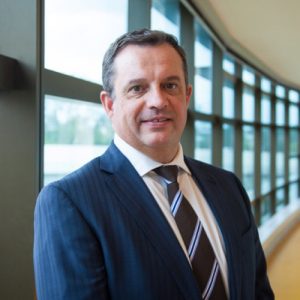 One of Australia’s larger superannuation funds is losing its chief executive officer after nearly six years of helping grow the fund’s assets to more than twice its size since his arrival.

Scott Hartley announced his resignation from Sunsuper on Friday to pursue other opportunities. He will stay on until the retirement plan, which covers various industry employees, finds his successor, making sure it “doesn’t miss a beat of its amazing momentum,” he said in a LinkedIn post.

“It has been an honor and a privilege to lead the awesome team at Sunsuper who have delivered industry-leading outcomes and experiences for our customers,” he said.

Hartley’s decision comes several months after the fund merged with AustSafe Super, continuing a trend where the nation’s superannuation funds are consolidating due to the government’s criticism of the industry.

Sunsuper also merged with Kinetic Super and the IAG & NRMA Superannuation Plan under his watch.

Chairman Andrew Frasier said Hartley introduced an “intense period of growth” to the organization, where it was recognized as one of the fastest-growing supers in Australia.

Part of that transformation involved upgrading its digital capabilities, allowing the fund to become more data-driven and boosting its investment performance. It rose from an average-returning record to a first-quartile performer among supers.

Fraser also praised Hartley’s leadership abilities. He said the departing chief has led with “a personal passion” for developing the fund and creating a “high-performance culture” within it.

The outgoing chief thanked his team for helping the institution attain the big wins.

“Our extraordinary achievements would not have been possible without having developed a high-performing culture across a team of people who are committed, extraordinarily capable and passionate about our purpose to inspire and empower Australians to fulfil their retirement dreams,” he said.

“This has been an agonizing decision, but the timing is right for me and for Sunsuper,” said Hartley, who felt “sad, proud, and excited” to announce his leave taking.

Fraser said, “Scott and I have recently been discussing his plans and I know he has wrestled with this decision, but having achieved his ambitions for Sunsuper, I do understand his eagerness to take on a new challenge,” he said.

Hartley did not announce his future plans.

Some of Sunsuper’s clients include Virgin Australia and Domino’s Pizza.