TRS set up $100 million in the separate account, a follow-up to the pension’s $250 million commitment in 2018 to the actual infrastructure fund. The primary vehicle adopted a unique fundraising tactic, which will see every dollar committed to the fund from third-party investors matched by the Public Investment Fund of Saudi Arabia, up to a total aggregate amount of $40 billion, which would make it the largest infrastructure fund to date.

The fund made headlines recently after Bloomberg reported it is seeking to acquire a minority stake in Carrix Inc., an owner and operator of ports and rail yards in more than 250 international locations. In the company’s January earnings call. CEO Steven Schwarzman said that the fund had raised an aggregate $8 billion by the end of 2018.

The fund recently announced its acquisition of a controlling interest in Tallgrass Energy, a midstream energy infrastructure company operating in 11 states, for approximately $4.4 billion.

TRS has a relatively robust infrastructure platform. A quick summary of some of its infrastructure commitments are summarized below (from September 30, 2018): 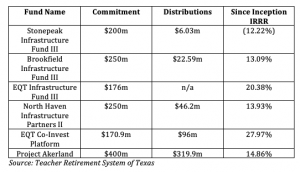 TRS also dished out significant investments to several other fund managers in 2019—approximately $900 million in seven strategies since the beginning of this year. 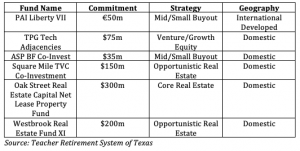 By Elijah Owens
LOG IN TO JOIN THE CONVERSATION

« How Does Yale Do It? By Being Different