The Texas Teachers’ Retirement System (TRS) approved over $1.8 billion in commitments to more than a dozen strategies during December, a recently issued report from the pension revealed.

A majority of the capital committed was allocated towards vehicles that primarily focus on real assets investments, such as infrastructure, real estate, and energy. However, private equity vehicles with large buyout strategies received some attention from the $154 billion investor.

The remainder of the institutional investors’ December 2018 activity is summarized below: 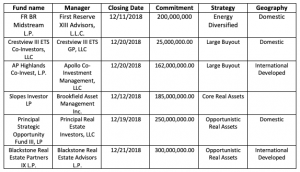