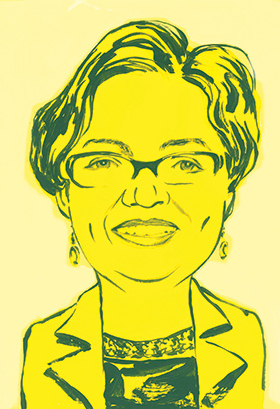 Jeanmarie Grisi (Art by Tim Bower)Employees who missed out on joining a corporation’s defined-benefit (DB) pension can still reap rewards—if the plan sponsor chooses leverage it.

Telecommunications conglomerate Acatel-Lucent is among those plan sponsors, leveraging its long-closed DB system for better fees and from using tested managers in its defined contribution (DC) plan.

“We have managers we know really well,” CIO Jeanmarie Grisi—head of more than $38 billion in retirement assets—described in Russell Investments’ latest risk management report. “When we’re looking for a manager for the DC plan, to the extent it is appropriate to leverage our existing relationships, we do.”

Alcatel-Lucent is far down the de-risking path for its DB plans. Earlier this year, it expanded a lump-sum payment offer for retirees to an additional 45,000 pensioners, bringing the total member offers up to nearly 75,000. As of 2014, its DB system included fewer than 10,000 active employees.

“For a very long time—at least 15 years—our liabilities have been more certain, in that 80% to 90% of the liability has been for individuals who no longer work at the company,” according to Grisi. “What we’re trying to do there is leverage the managers that we have on the DB side, as appropriate, for DC.”

A number of the leading innovators in American DC manage traditional pension assets alongside their 401(k) plans. United Technologies CIO Robin Diamonte, for example, remains one of few plan sponsors to wrap guaranteed income options for retirees into a DC default.

While DB expertise can enhance a defined contribution plan, Grisi noted that the the carryover is far from universal.

“One difference, for example, is that we have a real assets offering in the DC plan, because we feel that inflation is an important component for an individual,” she said. “On the DB side, we don’t have that; there is no inflation indexing of the participants’ benefits.”