2015 was the biggest year for asset manager mergers and acquisitions in a decade—and in 2016, M&A activity has hardly slowed down.

In March, four MassMutual boutiques and their combined $260 billion in assets merged to become Barings. In May, Ares Capital acquired American Capital for upwards of $3 billion, growing its asset base to $13 billion. And in October, Janus Capital Group and UK-based Henderson Group joined $300 billion in assets under management to create Janus Henderson Global Investors. 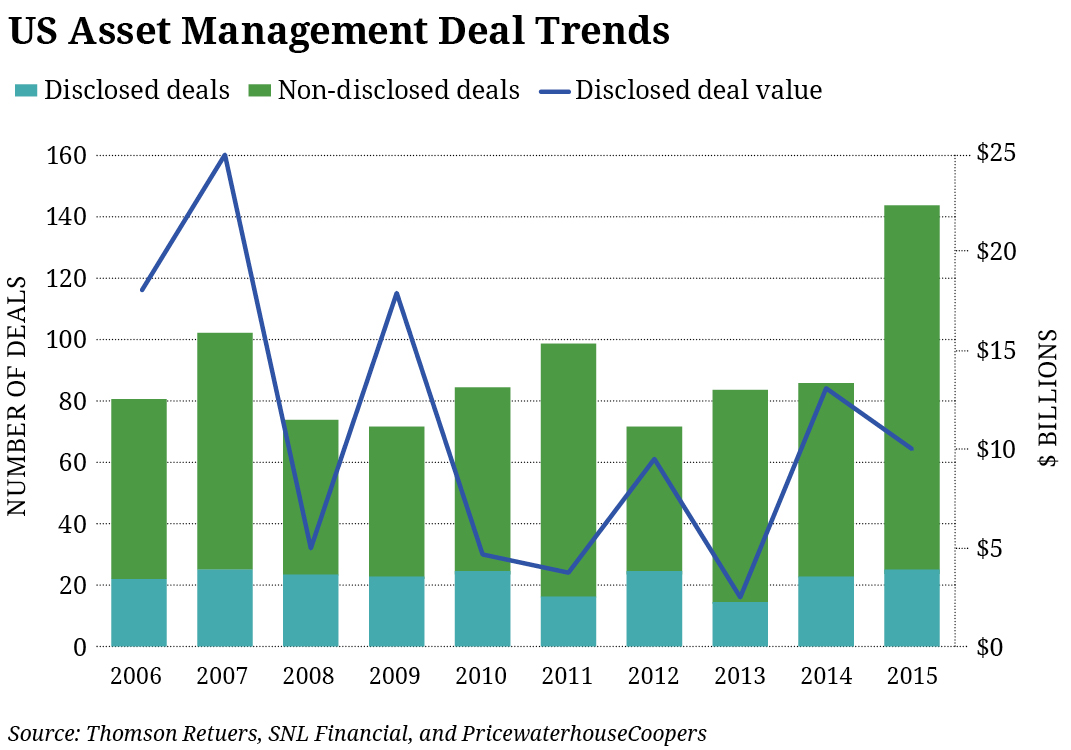 The sheer number of deals is down this year: As of October, 110 mergers and acquisitions had taken place in the US asset and wealth management sector, compared to 144 over the 2015 calendar year, according to data from PricewaterhouseCoopers (PwC). But the amount of money involved per transaction has “leaped ahead,” says PwC Partner Sam Yildirim.

It would seem that consolidation has become—pun intended—quite a big deal. But what’s prompting M&A activity this year, and how does it compare with the motivations of the past? The main driver, experts agree, is an industry shift toward passive management. 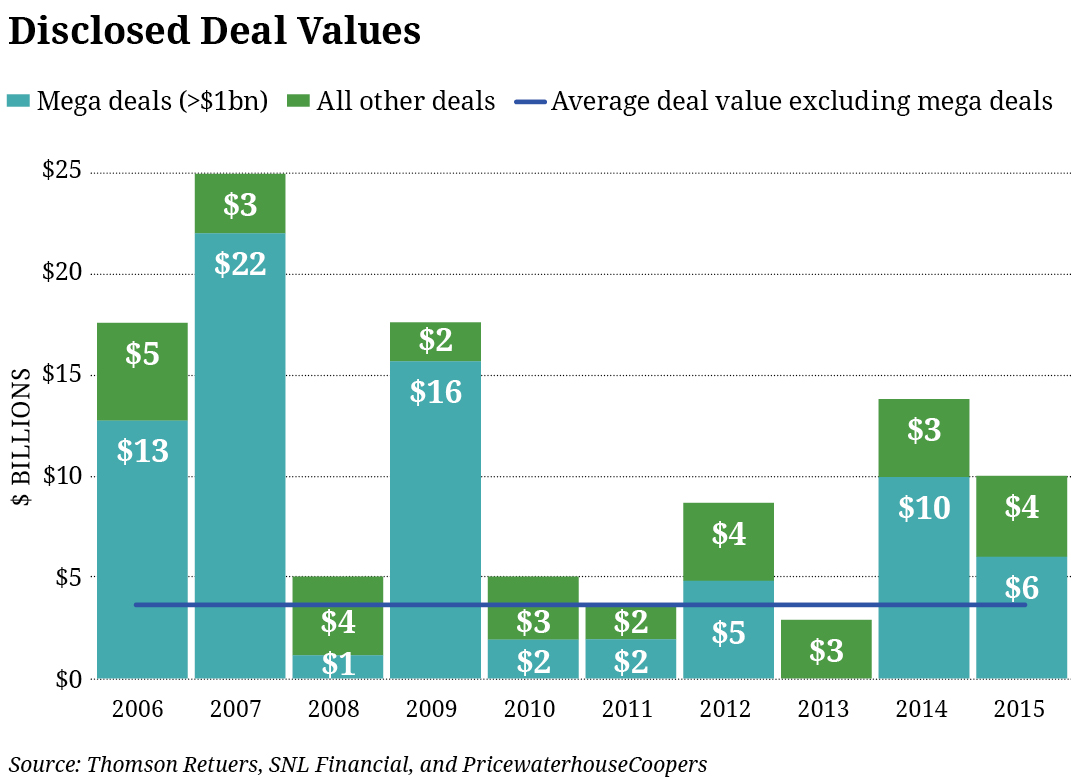 Prior to the financial crisis, asset managers’ valuations were very healthy, Yildirim says. The result was robust M&A activity in 2006 and even in early 2007. But then the financial crisis hit, spooking buyers and evaporating interest in mega deals. According to PwC, in the past decade there have been no more than three mega deals per year with the exception of 2007, which saw seven of them as the financial crisis brought forced sales.

“A decade ago, we saw a lot of stress sales… [but] after the crisis subsided, we saw things from a product perspective rather than a stress perspective,” says Jay Langan, partner with Deloitte Advisory and leader of Deloitte’s financial services M&A group.

These days, consolidation is “more of a shift versus a cliff,” he adds.

Although the financial crisis is long over, other changes in the asset management industry are impacting the overall market structure. Each sub-sector of US asset and wealth management is facing different challenges that may lead to deal activity, but the mutual fund space, in particular, is consolidating out of necessity, Yildirim says.

M&A activity among mutual fund providers surged in the third quarter, according to PwC, with nine deals announced in this sub-sector out of 36 total asset management consolidations. Comparatively, the second quarter saw five mutual fund M&As and 30 transactions total.

Among the main drivers for M&A activity in the space—as well as in the broader asset management industry—has been the shift among investors to low-fee passive funds.

“Increasing competition and pressure to reduce costs, particularly for actively managed funds that are struggling to keep pace with the returns and low fees of index funds and ETFs [exchange-traded funds], has led to some consolidation in the asset management industry,” says Bill Haynes, president and CEO of BackBay Communications, a financial services marketing and branding firm. “Many industry insiders think that there’s much more on the horizon.”

In addition to the rise of passive management, there’s an issue of regulation. The Department of Labor’s new fiduciary rule could be a boon for M&A activity in the mutual fund space, Yildirim says—but until the degree of the impact on the asset management industry is made clear, there won’t be too many cash deals and mega deals, at least in the short term. Add in election-related market volatility, and the prospects for further mega deals this year are unlikely. However, the expertise, time, and money it will take for managers to comply with the new regulation, as well as the ability to get shelf space from wealth managers, will make it more difficult for smaller, independent managers to go it alone.

In alternative asset management, on the other hand, M&A will be motivated more by a desire for new products, talent, and geography. For these managers, consolidation is not going to be high on the list, Yildirim says.

“We don’t expect alternatives managers to see consolidation in the industry as a necessity to survive,” she says. “They aren’t suffering as much as traditional funds in terms of fee compression.” In the hedge fund space, things have been relatively quiet as far as mergers and acquisitions go, but Yildirim expects it will gain steam next year. PwC’s third quarter report on asset management M&As notes that several hedge funds have underperformed the broader markets, which could result in mergers.

For firms that do decide to consolidate, the key to success is articulating a coherent vision for the future and generating excitement that the new entity will be beneficial to investor clients, Haynes says.

“A thoughtful strategic branding initiative and communications program is critical to the success of a merger,” he continues. “It articulates the benefits of the merger to all parties inside and outside the combined company. This is particularly the case in the asset management industry, where it’s becoming more difficult to distinguish on performance and products. The new brand needs to capture the essence of the company, its mission, values, and differentiators to provide a touchstone and guidepost for its approach to its business, customers, employees, industry and community.”

But this isn’t to say only big players will win in this environment. Eugene Podkaminer, senior vice president of capital markets research for consultant Callan Associates, says all of these consolidation may actually help boutique players “stick to their knitting” and promote specialties that can’t be replicated on a larger scale.

“For the past 20 or 30 years, you have had large enterprises that have offered something close to one-stop shopping, and you’ve had boutiques, and both of them have had their customers,” he says.

Portfolio management acumen in areas like real estate and infrastructure, for example, can make for an in-demand manager, Deloitte’s Langan notes, due to the dearth of quality managers in some of these asset classes. His colleague, Masaki Noda, agrees. “If you’re in a niche space that could generate returns for investors,” Noda concludes, “I think investors are willing to pay for it.”