Home > News > Newsmakers > The Many Tensions of Outsourcing

When CIO revealed in March that the office would lay off the majority of its staff and issue a request for proposals to outsourced-CIO (OCIO) firms, the GW endowment joined the ranks of asset owners looking to leverage investment outsourcing (or its myriad of other names: “CIO in a box,” implemented consulting, discretionary outsourcing, or fiduciary management). This strategy would put the fund in the hands of a vendor that theoretically would have the expertise and economies of scale to deliver on performance.

OCIO models can range from using a third party to manage a portion of an institutional investor’s portfolio to managing the entirety, but all aim to fill a gap that organizations feel cannot, or should not, be closed by building up internal capacity.

CIO’s 2014 OCIO survey bears this sentiment out, with 38% of respondents making “lack of internal resources” the most popular of seven reasons for outsourcing investment operations. From 2007 until now, the total assets under full external control have climbed nearly 500%—a meteoric rise for a business already entrenched in the corporate retirement space for more than two decades.

Among the 191 asset owners who responded to the survey, of which about one-third were corporate plan sponsors, the second most popular reason to outsource was “better risk management.” And yet, while asset owners look to outsourcing as a “de-risking tactic,” do the recent conflicts between a handful of asset owners and their vendors point to potential frictions in the model? 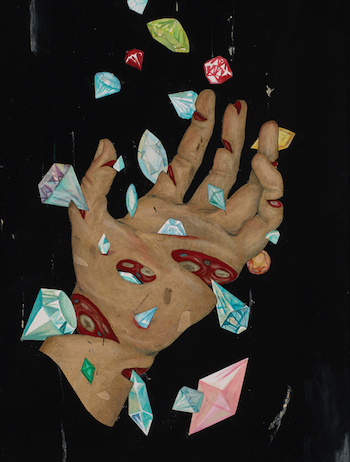 (Art by Jason Holley)In August, an Indianapolis church filed a lawsuitagainst the former sole trustee of its foundation, JP Morgan, for breach of fiduciary duty and fraud. From 2004 through 2013, the lawsuit claims, fees ballooned as the trust’s value fell 9%, all while the average small US foundation experienced a 6.5% gain over the same period. According to the church, JP Morgan chose “to purchase from itself clearly unsuitable investments” that, at times, made up nearly 85% of the portfolio. The bank fired back in early October, requesting that the case to be thrown out and arguing that it had full discretion over the investment choices of Christ Church. “The church was not the party making, or empowered to make, investment decisions,” JP Morgan’s lawyers argued.

“A trust beneficiary that has no investment authority cannot pursue a securities fraud claim against a trustee, such as the bank, that has discretionary authority to invest trust assets as the trustee alone deems appropriate,” the filings continued. “Put another way, the church cannot sue for securities fraud because it neither purchased nor sold the securities held by the trusts.

Most recently, a clash among the San Diego County Employees’ Retirement Association (SDCERA) trustees, surrounding its OCIO, Salient Partners, resulted in near-termination of its outsourcing arrangement after just four months. By one vote, the board denied a motion to dismiss Salient. The $10 billion fund is by far the largest fund in the public space to enter into a full portfolio outsourcing agreement, and a reversal would be seen as a blow to the OCIO model’s progress into the public sphere. Critics have focused on Salient’s fees, underperformance, and risk parity strategy, but the October 2 vote had supporters of the OCIO model. “We believe your board is at a serious juncture,” said the president of the county’s retired employee association. “You are suddenly and unexpectedly considering a reversal from an investment strategy you had agreed on after years of considered discussion.”

“We don’t think you’re prepared to make major changes, and we urge you not to cancel the Salient contract,” she added.

Some industry observers caution against drawing any large generalizations about the future of the OCIO model from these cases. “All it does is tell you the challenges of trying to run public fund money,” says one.

Another is blunter: “Salient is a one-off. Until about eight days ago, we had an extended bull-market run on equities, so unless you owned equities you were falling short. Then on top of that—which always makes headlines—the biggest and last straw was the fees. Paying a lot of money to have underperformance formed a perfect storm for politicians and others to play into.”

These events may be examples of underlying conflicts between asset owners and OCIO providers, but they appear to remain the exceptions rather than the rules. This has always been the double-edged sword of outsourcing: For all of its benefits, there will be some erosion of total control. In CIO’s survey, for those who have no plans to outsource, this was the number one reason (at 72%) why they abstain: “Want full control.”

“The OCIO trend is well-established and only growing,” says Jack Hansen, CIO of Parametric Clifton, a provider of ­policy-based risk management overlay for nearly 30 years. “There are a lot of funds that would benefit from the use of an OCIO group, because of their governance structure or a decision-making process that tends to either meet infrequently or be contentious—slow to make decisions.”

OCIO “allows investment professionals to do what they do best, if you select a quality group—and that’s a big if—but there are lots of good groups out there,” Hansen says. “But you must monitor that organization, so it is fulfilling the goals of the plan.”

“We see risk management more broadly defined than as just the investment portfolio,” says John Nawrocki, partner at Rocaton Investment Advisors, a consultancy with an open-architecture, discretionary OCIO platform. “When you add the other risks that fiduciaries face—fiduciary, discretionary, operational—clearly it’s in their growing interest in moving to outsourced models. You have firms such as Rocaton that are willing to step in and take on those additional responsibilities.”

“When you add in the fiduciary, discretionary, operational risks asset owners face, clearly it’s in their growing interest in moving to outsourced models.”

When they do step in and take on more responsibilities, though, who owns the risk? OCIO means different things to different institutions, Hansen says, and that means different sets of expectations, oversight, and accountability. “Sometimes the OCIO relationship is literally passing all responsibility to the vendor. They become our client, and we only take direction from them; other times, the OCIO becomes a strong advisory relationship where they will effectively craft the change, and then an authorized party of the client will have the last sign-off on that change. There are different levels: from the traditional consultant set up, where he or she may volunteer or be asked to suggest best thoughts, to one in which the consultant becomes the OCIO and does everything without reporting back to the client. And, of course, there is a large middle ground between those two.”

A new growth area that only a handful of firms seem to have capitalized on, Hansen says, is OCIO performance measurement. “No one should be considering hiring an OCIO group without at least considering hiring some party to independently assess its success and the value proposition,” he says.

This practice isn’t yet mainstream, but it so aligns with the objectives and philosophy behind OCIO that it soon could be. The second-wave adopters of external-CIO models—and especially their boards—could begin asking themselves if they made the right decisions, and an independent performance report could give them insight into the answer.

“If you assume the first wave of OCIO was 15 years ago, then this most recent wave—which started to build five years ago and is still building—has not seen many terminations,” Hansen says. “But that gets back to the measurement. You hire a manager, give it three or five years to prove its worth, and, in the next one to three years, we may start to see selective changes in the OCIO relationship. People may become dissatisfied with results, fees, the organization. Or the contracts are simply put out to bid in a natural cycle. As of now, we haven’t seen changes in the OCIO landscape in a meaningful way.”

Regardless of whether an independent valuation party is involved or not, the OCIO should be able to explain performance and break it down into its components, adds Rocaton’s Nawrocki. “Whether it is the manager’s overperformance, underperformance, relative performance, or any type of asset allocation or investment structure decision, the need for both of us to review decisions is imperative,” he says. “Asset owners should expect to be able to have those answers at their fingertips when performance questions come around.”

“If you assume the first wave of OCIO was 15 years ago, then this most recent wave—which started to build five years ago and is still building—has not seen many terminations.”

A major concern—and one that lies at the crux of Christ Church’s lawsuit against JP Morgan—is the Chinese wall that may be in place when an institutional fund is turned over to an OCIO that is also an asset manager. How do you ensure that the provider won’t invest with its own best interests in mind, as opposed to the asset owner’s?

“It is less about where its roots are, but more about how well it can do the job,” says one investment banker who has executed deals in this space. “OCIO is hard to do. Only a handful of firms do it well, and they’re the ones that are going to get the assets. At the end of the day, regardless of whichever space its origin is in, it’s about how well [that firm] prioritizes the job and clients.”

But the risk or potential conflict can exist if the OCIO is also getting paid to manage money. “That does not necessarily mean you need to rule the party out from consideration,” says Clifton’s Hansen. “It’s just about the proper evaluation and proper disclosure. Whenever you have that self-dealing issue, you want to be extra diligent in the evaluation.

For consultants with discretionary, open-architecture platforms like Rocaton’s, Nawrocki says, competing incentives could never be an issue. “Our decision-making is aligned,” he says. “We’re trying to select the best managers and best investment structures. We don’t have proprietary product. This is religion here.”

From wherever they sit on the outsourcing spectrum, observers have a similar perspective of the future: There will be more, not fewer, institutions turning to the OCIO model. A “natural conversion” of this, says Hansen, will be the take-up by more public pension plans.

The aforementioned investment banker sees a thornier journey. “I actually think that, at some stage, investment outsourcing is going to find a way into the public funds space, but it is going to be a tortuous path.”

“This is a change in the asset management business, and change comes hard,” he continues. “When it comes to public funds, the progress of outsourcing will come in fits and starts because outsourcing—to some degree—takes away the very prizes that public funds have fought over for ages: the fruits of control over their own investment capital.”

Nawrocki takes the middle road on public plans’ entrance. “I would say that we expect more public plans to at least start looking at this as their circumstances change,” he concludes. “Many of them see the same resource constraints that others have witnessed over the last two decades. And obviously a key driver is the increasingly complex investing environment—which shows no abating—so you are going to want more experts at the table. That is clearly the value proposition, and public funds are witnessing it.”