You dance an awkward dance when an investment committee debates whether or not you’re worthy of billions of pension dollars.

Your 20 minutes in the hot seat will arrive at 11:00 a.m. You wake up in your hotel that morning, have two too many cups of coffee, and go over your final presentation one last time. You put on a nice outfit—but not too nice—and head to the lobby, where you meet your slightly awkward investment guy. Together, you get in a cab and head to the company’s headquarters. Your stomach tightens.

When you arrive at 10:30, you sign in and take a peek at the other signatures on the page. Is that the guy from BlackRock? And the young woman from Legal & General? There’s beleaguered PIMCO—poor souls—and niche-y NISA Investment Advisors. You are not alone. The competition is here, every time.

Pried away from the login book, you are taken to a small conference room. Like horses before a race, each competitor gets their own stall to wait out their time on the track. The windowless room feels more cellblock chic than big-city waiting area, but you sit impatiently, going over notes you’ve long since committed to memory, waiting for the consultant to fetch you. Who is it, again? Towers? Hewitt? Graystone or Rocaton? The meetings blur. And you’ll remember soon enough.

11:20 a.m. rolls around—these things are late, habitually late—and you’re finally called in to the main conference room, home to the world’s largest table. Seated across from you, approximately in Siberia, is the glassy-eyed investment committee. Are you the last to present? Is that good, bad—or catastrophic? No time to ponder: You have 20 minutes to introduce yourself, your firm, your capabilities, and why you’re in the room, all before the handover to your investment guy. He will mumble an explanation for how he plans to invest their money, then field questions from the unexcitable committee members. With practiced tact, you’ll avoid any overt references to the fact that they’re replacing a derelict manager. You’ll also fail to mention any hint of how much money this deal would make you. 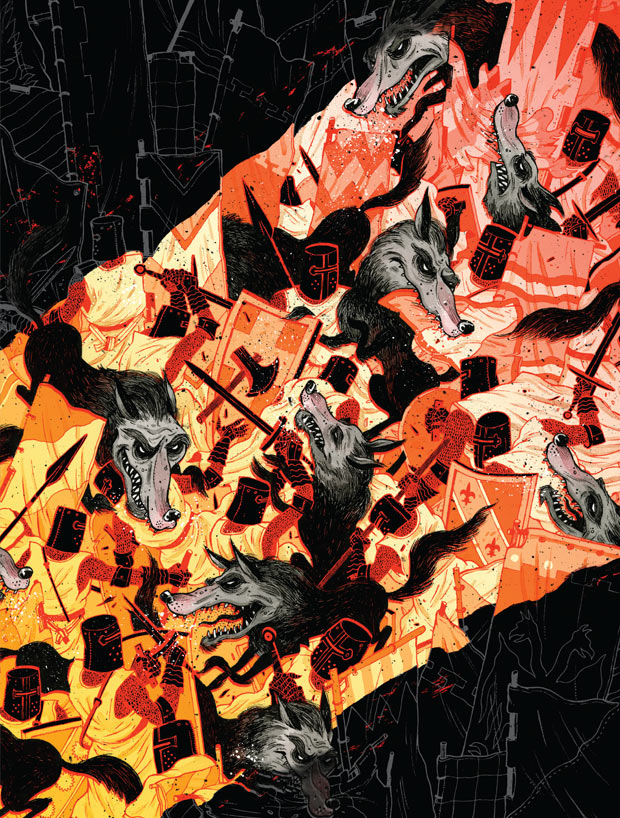 Twenty-three minutes later, you’re done. The lead consultant gives perfunctory thanks and ushers you out, studiously avoiding an encounter with the managers he’s been shuttling between rooms. Until the next committee meeting a month from now, you’ll hear nothing—but on that day, you’ll anxiously watch the phone for a call from the consultant, bearer of news good and bad. And thus the dance continues for four more weeks.

But the best manager knows something else, too: This is not a dance at all. It’s war.

Now is the most competitive period in the history of institutional asset management. The number of providers and regulations keeps climbing, as does the accuracy of performance attribution. In this environment, hedge funds, private equity firms, infrastructure managers, indexers, and traditional long-only funds are all seeking to expand their assets under management. Leaders of public pensions, endowments, foundations, health care organizations, and insurance capital pools receive emails upon calls upon business cards upon handshakes, hoping to pry assets from their clutches. It is the rare asset owner—and the even rarer asset manager—who is content with where their portfolio and business sit now.

And yet, it is in the staid world of corporate pensions where this competition is most brutal. According to conventional wisdom, these funds are all de-risking, are all afterthoughts, and are all on their way to zero. It is because of the near-veracity of this conventional wisdom that the battle for these assets has reached its apogee: While public pensions and nonprofits represent a growing pie for all to eat, corporate plans represent the opposite, a shrinking pie. In five years, the divvying up of this finite dessert will largely be settled—de-risking managers with assets will retain these assets as they nurse corporate pensions to their graves—which explains today’s frenzy.

So who is winning?

The answer depends almost entirely upon the person you ask. From the approximately 10 credible liability-focused managers in this space (and liability focus is the first, and essential, factor in winning this battle), there are approximately 10 different answers. Consultants, fearing for their business model, don’t know whether to laud their latest recommendation or hedge, knowing they might soon be liability-focused managers themselves. And corporate pension chief investment officers, many of whom execute de-risking strategies via multiple managers (more on this later), have no incentive, as fiduciaries or humans, to publicly reveal their preference. Only in off-the-record interviews (for this article, more than a dozen) does one truly hear of the battlefield geography and those mastering it.1

“You’d be surprised how many plans were doing LDI [liability-driven investing], or what amounted to LDI, in the 1980s,” one long-time industry observer said recently. “The players back then were Salomon Brothers, Goldman, Paine Webber, a few others. Rates were right, if regulation wasn’t. The 1990s brought not a slowdown in the market, but perhaps a pause—the rate environment changed, and there was still no regulation forcing the closing of American corporate plans.”

That all changed in the US with the Pension Protection Act of 2006 (PPA)—LDI’s crossing of the Rubicon. “Niche players—I think of Standish, NISA, Legal & General [LGIMA], Prudential even, by some definitions—started with a liability focus,” one prominent CIO says, surveying the manager landscape. “They might not have been selling LDI, per se, but they often understood liabilities better than the actuaries did.”

“This was all pre-PPA,” he continues. “That was, to use a cliché, a complete game changer in the American market, and it’s where you saw a new group enter the LDI market aggressively. PIMCO and BlackRock, the two giant fixed-income houses, saw their opportunity. They hired specialists to beef up their liabilities credentials, and they thought—with obvious good reason—that they could do it, too.”

“I wouldn’t refer to them”—Standish, NISA, et al.—“as niche,” counters one consultant who works almost exclusively in the de-risking world. “They’re more specialized, more focused. And I would argue with the often-implied idea that they are the natural LDI managers. LDI is a specialized fixed-income area, but it is still a fixed-income area. We may think of it as something that requires tremendously different skills than a traditional fixed-income manager, and it’s really not. The goal is different, but the skill set is similar.”

“Niche players—I think of Standish, NISA, Legal & General, Prudential even—started with a liability focus. They might not have been selling LDI, per se, but they often understood liabilities better than the actuaries did.”

“I agree with the second part, however,” he continues. “The big fixed-income houses moved in aggressively after the PPA in 2006. The other guys who have arrived more recently may not have entered as liability-focused as they think. They were already asset guys, and they remain asset guys.”

There are, of course, wild cards in this analysis—“Pyramis has to be counted somewhere, as do a few consulting firms,” one observer stresses—but plan sponsors largely view the LDI manager market as a dichotomy between focused and all-encompassing.

1 For the sake of honesty, I have kept every interview for this story off-the-record. Everyone with an opinion of LDI seems to have a dog in the fight—and thus anonymity is used to garner more honest assessments.

So who is winning? “The cult of NISA,” according to one industry participant. “There doesn’t seem to be any accurate sizing of the industry”—an apparently true statement, judging by an unsuccessful Google search and multiple inquiries to LDI managers. “But you have to think that NISA has almost half of the US LDI assets out there.” Judging by the number of submissions to CIO’s 2014 LDI survey, this may not be entirely accurate. Yet with more client responses than any other asset manager, the St. Louis-based firm seems to have both client assets and enthusiasm on its side.

It wasn’t a foregone conclusion that the specialty shops would win out, however. “PIMCO could be the best LDI manager out there, if there weren’t better fruit to pluck,” another industry observer notes. “If you don’t focus on it, you don’t do well. LDI is such hard work. It’s thus still NISA’s marketplace; it still dominates the space like no other manager. That doesn’t mean LGIMA hasn’t been remarkably successful—breaking into a new market from scratch, really—but NISA is still the powerhouse.”

Not everyone agrees, of course. “For us, we have $400 million, maybe $500 million that needs to be liability-focused,” says one health care CIO. “We already used BlackRock and PIMCO for many other mandates. Why add on more managers, and start whole new relationships, when these two can completely competently manage long-duration strategies?”

Future battles are unlikely to be so straightforward. The combination of new entrants, increasingly complex and derivative-oriented strategies, pension-risk transfer competition, and the prevalence of multi-manager LDI portfolios all suggest that the landscape will further evolve before it’s locked down.

“I think there is space for more managers,” one pension CIO says. “There probably isn’t space for everyone. The market isn’t saturated, but the barriers to entry are high. You can’t just hang out a shingle and claim you do LDI. The question of whether to buy or build is a central one—just look at Insight Investment’s move to buy Cutwater as a play into the American market.”

The move towards having more than one (and in some cases, four or five) different long-duration mandates—plus, occasionally, overlay and completion managers—will alleviate some of the space constraints. Done to diversify and take advantage of various manager strengths, the trend isn’t without its critics. “I’m always surprised when plans have two to three managers—that’s suboptimal,” one corporate fund CIO argues. “LDI is an allocation issue, not a product. It’s for the entire portfolio. So, if you’re hiring three or four LDI managers, you’re just buying product; you’re hiring a bunch of fixed-income managers and not really pursuing ‘LDI.’ Managers don’t fight the multi-manager issue—they’d rather have a slice of the pie than risk having no pie at all—and that’s indicative of the business as a whole.”

But the most likely trend to shape the LDI battlefield is pension-risk transfer. Pension hibernation—managing liabilities on-balance sheet as the plan winds down—is a very real option, but bulk annuity purchases, and the might of Prudential in the space, must have many traditional LDI managers worrying.

But not all. Prudential, of course, both manages LDI assets and annuitizes them. And it’s not the only provider fighting on both fronts. One industry observer sees the future in Legal & General, the established UK firm that has rapidly made American inroads. “LGIMA is now getting into risk transfer, and thus will be able to do a lot more,” the observer says. “In terms of overall pension solutions, if they succeed there, they will truly be soup to nuts.”

The phone rings. It’s been four weeks since you presented to that acreage of a table ringed by glassy-eyed investment committee members. Your boss has been bothering you for an answer—“Did we win that mandate? Well, what do you think will happen?”—a guess you wouldn’t hazard.

It’s the consultant. He will either make your day, or destroy it. But you can’t pick up, not right now: You’re in another back room, in another city, waiting for another consultant to lead you to another conference room to meet another investment committee. The call will have to wait an hour. The battle continues.