“I can’t believe I’m even saying this. It’s not news I want to be reporting, but we can confirm with the statement on David Bowie’s official website that he has died…”

His voice shaking, the reporter on the BBC’s alternative music radio station 6Music read the brief official statement confirming the enigmatic singer’s death.
A true music legend had passed, and the whole of Britain—and significant proportion of the rest of the world—was stunned.

Amid the outpourings of grief from collaborators and fans, the press scrambled to publish their obituaries, picture specials, reruns of old interviews, and ‘I knew him too’ columns.

I made do with listening admiringly to “The Rise and Fall of Ziggy Stardust and the Spiders from Mars” on my journey into the office. Bowie was more than just an innovator: he was an explorer, treading artistic paths none had before.

There’s an odd Venn diagram to be drawn at this point, intersecting fans of the man behind Ziggy, Aladdin Sane, and multiple other iconic alter egos, and the growing fan base of alternative fixed income.

“It was a classic Bowie thing to do—very innovative.”Back in 1997, Bowie raised $55 million through loans backed by royalties from
25 of his albums—including the aforementioned “Ziggy Stardust.” Prudential Insurance Company of America bought the whole portfolio, and kept them. The insurer earned a tidy 7.9% a year from the innovative concept until the bonds expired in 2007, whereupon Bowie took back the rights to the royalties.

David Pullman—the man behind the Bowie Bond concept—“cornered a very niche market and was ahead of the curve,” Cowley adds.

At the time, Entertainment Weekly claimed the move had prompted other major artists to consider a similar move, including the Rolling Stones and Pink Floyd. In truth, only a handful of others did: Among them were soul singer James Brown, who raised $30 million, and the Isley Brothers, who partook of “an eight-figure transaction,” according to the Pullman Group, which constructed the deals. 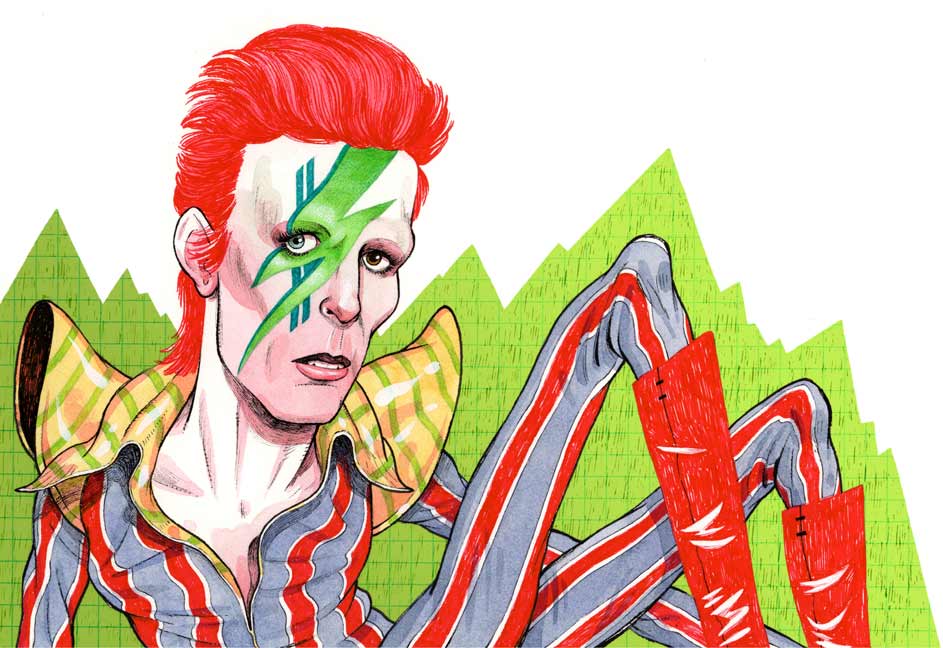 Rob Ford, founding partner and portfolio manager at specialist bond house TwentyFour Asset Management, argues the move was “equally as ground-breaking as his music” and may have laid the foundations for the now-burgeoning asset-backed securities (ABS) market.

Ford highlights the “securitisation of the revenues from portfolios of pubs,” although the trend extended beyond British mainstays. John Amoasi, senior associate at consulting firm Bfinance, adds in car loans and credit cards as examples of assets that have been packaged up by banks and sold off.

Roughly $90 billion in ABS were issued in 2014, according to data collated by the fund manager, up from $14 billion in 2008. That’s quite an explosion of interest.

The Bowie Bond legacy doesn’t sit well with everyone. Drawing a parallel with the ABS market back in 2009, British journalist and presenter Evan Davies wrote a semi-serious column speculating that the innovation sparking the ABS market had inadvertently led to rampant speculation and mis-selling of securitized mortgage products in 2006 and 2007.

As romantic as it sounds, however, David Bowie did not invent the concept of ABS. Sorry, “Moonage Daydream”-ers.

In the 1980s—as Bowie was producing more mainstream work such as Let’s Dance and the critically-lambasted album Never Let Me Down—Stewart Cowley was trading in sets of specialized mortgages. Collecting rents, calculating yields, and finalizing returns were all “a nightmare” as very little was computerised.

As systems became more sophisticated, banks packaged these pools up into bigger products to sell them on. London insurance companies were big buyers, drawn in by the income stream.

In more recent times ABS yields have fluctuated. European securities traded at 50 basis points above German bunds pre-financial crisis, according to Bfinance’s Amoasi. This spread then blew out to 180 basis points in 2008 and 2009, and spiked again to roughly 300 basis points at the height of the Eurozone debt crisis in 2012.

Now, however, spreads are right back at 50 basis points above bunds, thanks in a large part to the European Central Bank’s quantitative easing programme. Mario Draghi is buying up more than €1 billion a month worth of—you guessed it—asset-backed securities.

However, Draghi is not cashing in on royalties from Aerosmith or Queen. (They’re rather more dull assets such as Dutch mortgages, I’m afraid.) Nor will you find Kanye West’s back catalogue or sales of Rolling Stones vinyl in Brown Brothers Harriman’s latest portfolios.

The rise of the internet, file sharing, downloads, and streaming have all played a role in the collapse of revenues from music. This pretty quickly put an end to the Pullman Group’s royalties play, and it is unlikely to make a comeback.

A tribute to Bowie from David Pullman, the architect of the bonds. Source: Pullman BondsOther esoteric assets are still being securitized though, and these days buyers are more diverse than insurance companies. But with exciting high-yielding assets come liquidity and complexity hurdles.

“If you really understand what’s behind the ABS and you’re able to account for the performance and you have an advantage from a tax point of view, then they’re great,” says Cowley. “But you really have to be able to do the research.”

Also, ABS work best in a stable interest rate environment. With deliberations over rate hikes in the US and UK, and the risk of policy error, we will not have stability for much longer, Cowley adds.

As one UK-based CIO points out, investors in ABS also have to be aware of what they may end up holding if the loan defaults. Can you deal with being made owner of distressed residential housing all of a sudden? Or a package of consumer debt which you then have to collect? It sounds a lot less fun than the royalties from “Life On Mars?”.

One final thought: This reporter is amused by the idea of David Bowie in full Aladdin Sane facepaint and outfit pitching his bonds to a team of suited insurance investors. Perhaps he’d been practicing the pitch since 1984’s “Absolute Beginners”: “I’ve nothing much to offer, there’s nothing much to take. I’m an absolute beginner but I’m absolutely sane.”

In finance, as in music, Bowie offered creativity that forever changed an industry.