“You could almost reverse the sign that we saw in Q4,” said Michael Haddad, the New York City Bureau of Asset Management’s deputy chief investment officer of public and tradeable markets. “Everything bounced back in Q1.” 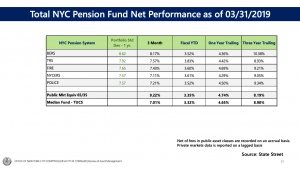 Equity markets were a big boost, returning nearly double digits across domestic (14.04%) and international (10.52% developed, 9.92% emerging) allocations. Fixed income assets interestingly were also strong during the period ended March 31. When public equity tanked in Q4 2018, bonds rose as expected. However, they both received a push during this year’s first period. Typically one goes up when the other goes down.

This was a big change from the beating the stock market took in late 2018. “It seems like ancient history because we get tweets every day” that roil equities, said Haddad, also referring to the monthlong government shutdown from December to January and late 2018’s market beating, and President Donald Trump’s favorite social media activity. 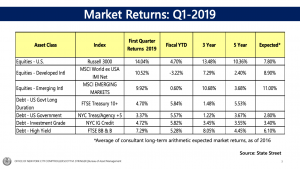 The deputy chief and right hand of CIO Alex Doñé said reasons for the first quarter’s performance were trade war optimism at the start of the year and the Federal Reserve’s dovish pivot from last year’s interest rate hikes.

“In December, the G20 in Buenos Aires saw Trump and Xi decided not to raise tariffs and negotiate, which took place in Q1, leading to rallies in Chinese markets,” he said, in reference to China’s leader, Xi Jinping.

Fast forward several months, and a lot of that trade war hope has evaporated. And although there is another G20 summit next week, with Trump tweeting he will hold an “extended meeting” with Xi at the event, that doesn’t mean anything until it happens.

The bureau’s assistant chief said he sees a recession indicator in the president’s desire to slap tariffs on Europe’s auto industry. Haddad said the implications would cause corporations to “tighten their belts,” meaning growth, employment, spending, and supply chains would suffer.

“Over the past three or four decades as China opened up to the Western world, the global supply chains have really, really become intertwined between countries, and if those have to get unwound and get reestablished elsewhere … it might be the tipping point that puts the economy into recession,” he said.

Haddad also said the Federal Reserve’s decision to halt its interest rate boosts has further stoked optimism. “the Fed had a significant pivot away from raising rates to a bias towards lowering rates in Q1.” In Q4, the Fed considered continuing to raise rates, but the decision changed pretty quickly to “patience,” and in the March FOMC meeting, it ended quantitative tightening in 2019 altogether.

The official said the “dovish” pivot was a result of the Fed undershooting its 2% inflation target. “You can see over the past five years while we’ve been in a strong economy, positive fiscal stimulus that we’ve barely pierced 2% inflation. This is causing consternation at the Fed more so than in the past several decades.” Haddad suggested that America is on the cusp of a “regime shift on how monetary policy is formulated and implemented.”

Average inflation targeting was a way the Fed could play “catch up” with its rate goals, Haddad said, arguing the body could overshoot its inflation. “That would be supportive for equity markets, it would lead to lower rates in the front-end of the market, but probably higher rates in the backend of the bond market.”

As for rebalancing its assets, the fund added more bonds, investment-grade credit, and increased its stake in stocks. It had initially sold off equities in the fourth quarter.

“We’re on board for the potential for eases, and we’ve extended duration accordingly to try and get your portfolios more positioned for that,” said Haddad.

The New York City pension system oversees the retirement assets of the teachers, employees, and Board of Education systems, along with the police and firefighters’ funds.

New York City is Worried About China, and the Fed