The growth of UK private sector defined benefit pension plans’ liabilities have outpaced the growth of their assets in August compared to July, according to JLT Employee Benefits’ (JLT) monthly index.

“Markets have been treading water against an ever-challenging political backdrop this month,” Charles Cowling, director, JLT Employee Benefits, said in a statement. “As a result, IAS19 pension deficits, the deficit that is recorded in a company’s accounts, have drifted higher.”

The total assets for all UK private sector defined benefit pension plans as of Aug. 31 were £1.606 trillion, a £36 billion increase from the £1.57 trillion reported at the end of July. However, the liabilities of all UK private sector plans grew by £52 billion to £1.805 trillion from £1.753 trillion during that same time.

However, the disparity between the growth of pension assets and their liabilities could be even greater than these figures suggest, said Cowling.

“This month has seen the massive British Steel Pension Scheme reach a long-anticipated agreement on its future; Tata Steel signed a Regulated Apportionment Arrangement with the trustees,” he said. “This requires the company to pay an additional £550 million into the pension scheme, whilst the members have been asked to accept lower future pension increases. This is a stark reminder that real pension liabilities may be higher than are showing in some companies’ accounts. Those firms with pension schemes that are large relative to the size of the company may be carrying pension risks they cannot afford.”

Since the end of August 2016, the assets of all UK private sector pension plans increased £59 billion from £1.547 trillion, while their liabilities decreased £82 billion from £1.887 trillion. At the same time, the assets for FTSE 350 companies and FTSE 100 companies rose £28 billion and £27 billion, respectively, from the same month last year, while their liabilities dropped £36 billion and £30 billion, respectively. 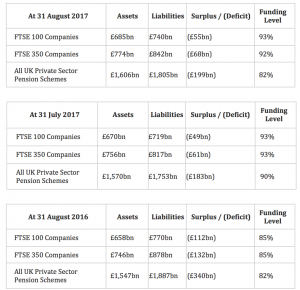