The University of Arkansas’ investments returned 15.4% for the fiscal year 2017 ended June 30, helping boost its endowment to over $1 billion for the first time.

The returns easily beat the broad universe of US colleges and universities, which generated a median 12.9% return for 2017, and surpassed bigger university endowments such as Harvard, Yale, Stanford, Princeton, Duke, and Brown.

“This is a major milestone and to be celebrated because the health of our endowment is an indicator of future success and security for the university,” said Chancellor Joseph Steinmetz. “The endowment is our nest egg, our insurance that we can continue to provide scholarships and fellowships, support the excellent work of faculty, and keep programs thriving regardless of external forces.” 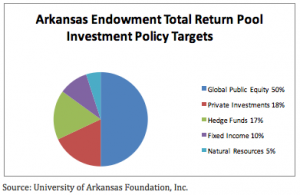 At the end June, the value of the pooled investments managed by the University of Arkansas Foundation stood at $996 million. An early fiscal year 2018 private gift support generated by Campaign Arkansas, including $110 million in endowed funds from the Walton Family Charitable Support Foundation,  pushed the total over the $1 billion threshold.

Campaign Arkansas is the ongoing capital campaign for the University of Arkansas to raise private gift support for the university’s academic mission and other key priorities. The campaign’s goal is to raise $1 billion.