“We are a solutions provider, and some of my team will provide creative solutions for getting out of here in the event of a fire.”

You come for the investment insight, but you stay for the gags.

The “here” in question is a luxury lecture theatre in the basement of the May Fair Hotel in London, complete with textured wallpaper that could double as a carpet and large leather seats with pullout desks.

The delegates are here for a macro-economic debate and a series of “breakout” sessions on a variety of topics. I am here for one reason: to gate-crash the wild liability-driven investment (LDI) party that I am sure will be taking place in Room 3. 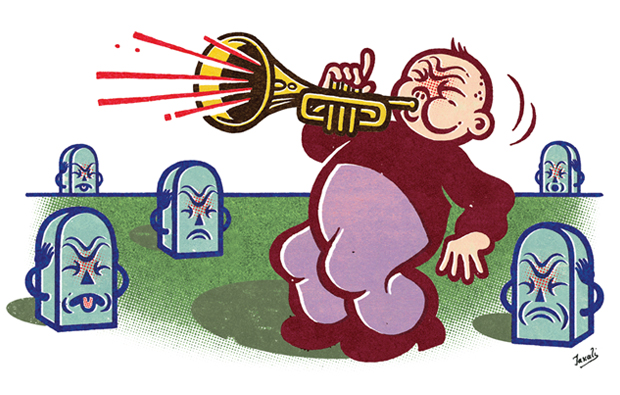 To rewind a little: The May Fair Hotel is not only a “legendary five-star hotel,” but also one of London’s top conference venues. Upon entering the vast basement hall, full of clients and home team staff enjoying lunch, I spy a table stacked with iPads. It is evident from the screens that they are meant to provide delegates with presentations, speaker biographies, details of their personalized schedule of sessions, and even an interactive voting facility. The future has arrived!

I am ushered to the far end of the table and given my name badge. There is a pause. “Do I get an iPad?” I wonder. There are not enough to cater to the half-dozen journalists on top of the 150 delegates, so there will be no vote for me. So much for democracy.

Before I can mutter something about my right to participate in a free and fair referendum as to what the base interest rates in the US and UK will be at the end of 2015, I am directed to the far side of the hall to join my fellow media representatives queuing up for lunch.

The broad, flattened chandelier and autumnal trees seemingly embossed into the walls promise a high standard of food, and we are not to be disappointed. But by the time we have sat down with our pheasant and orange pâté, goat cheese salads, and fresh hot food in top-of-the-range mini casserole dishes, it’s nearly time for the first speaker.

CIO has faced greater challenges than mild indigestion in the course of breaking news, however, so lunch is wolfed down and I move on to the leather-bound lecture hall. It is not long before I get my first glimpse of LDI-related material, when one panelist suggests there is a “wave” of money waiting to pile into liability-matching strategies when bond yields move up. The man next to me taps “1%” on his iPad when prompted to predict where the US core interest rate will be at the end of 2015. He finds himself in a majority.

During coffee, I ask where the LDI talk is. I am met with a slightly puzzled look from one of the organizers—apparently journalists are supposed to go away now. Which raises the question: What is about to be wheeled out? Dancing girls? Ben Bernanke? At the very least I expect cocktails.

With some polite persuasion and a reiteration of the ‘Chatham House’ rule (keeping all quotes anonymous throughout the session), the bouncers let me beyond the velvet rope, down the red carpet, and into the exclusive VIP area for LDI enthusiasts.

But there are no cosmopolitans here. Not even a Long(evity) Island Iced Tea. Sparkling water is as racy as we get.

Instead, the tipple of choice is interest rates and when they will rise. Predictions are, of course, almost always wrong (take that, iPad voters): The consensus at the start of 2014 was for bond yields to rise as prices fell, but the 30-year real yield on UK government bonds has just hit a new low—so, wisely, our host does not make a forecast.

Instead, he reminds us that there is an “enormous amount of potential structural demand” for LDI from the UK, the US, and Europe as more defined benefit plans begin to map a route to wind up. They are just waiting for an uptick in yields before piling in, he says—good news for any LDI managers in the room.

Just as I am imagining my glass of water is in fact a piña collateral, the topic turns from interest rates to regulation. Specifically, the European Market Infrastructure Regulation (EMIR). A grand old gold-encrusted grandfather clock sits in one corner of the room, which looks like it has been stuck at 4:48 since the 1987 stock market crash. Where’s that kid with my margarita?

Our host assures us that EMIR is significant. European politicians and regulators—mainly regulators, judging by the detail—have introduced the concept of central clearinghouses for derivatives. This is probably of great importance, but at this point an animated chart is reflected in a dozen iPads around the room and I’m reminded that I am a disenfranchised member of the technological “have-nots.”

Shiny new European clearinghouses will bring transaction costs to 0.019% for 200 trades, our host estimates, but having to hold lots of cash will raise the cost for investors to 0.55%. A couple of nods of recognition, but no shocks of horror or choking on imaginary mai tais. This seems like a lot to me, though—like paying two cents for a toffee, only to be asked for another 53 cents in insurance premiums in case all your teeth fall out while chewing it. But it is in the interests of the less risky pension fund investors to see others kept in check, we’re told, so you don’t end up with somebody else’s dentist bill.

Having said all this, with more sage nodding all around, we are then told that it is more of a problem for asset managers than pension funds anyway, so don’t worry about it.

After a brief plug of the host’s LDI products, questions are invited. There is an awkward shuffle of chairs. There are still 10 minutes of this session left. Finally, a couple of questions are forthcoming from the audience and the speaker battles to maintain his concentration as a light bulb inexplicably begins to flash on and off above his head.

A few minutes later, I stagger bleary-eyed into the gray drizzle of London in October. The heady combination of pheasant pâté and sparkling water has disorientated me. One idea emerges clearly as I try to locate the nearest bus stop: This LDI thing really could catch on—but a caipirinha might help.

« How Much Do You Trust Your Managers?