Senate Bill 5240 was introduced on Jan. 16  by Democratic Sen. Reuven Carlyle and Republican Sen. John Braun to provide an option to the major retirement systems in Seattle, Tacoma, and Spokane to irrevocably outsource the management of their portfolios to the Washington State Investment Board. Both the Seattle and Spokane boards indicated it was not an option they would pursue.

“SCERS is not seeking the option made available in the bill to outsource investment management,” SCERS Executive Director Jeffrey Davis said in a letter to Carlyle and Braun. “The bill suggests that first-class retirement systems have higher administrative costs and more limited investment opportunities. In fact, SCERS and WSIB have substantially similar costs and access to investment opportunities. The total costs as a percentage of assets under management for 2017 were 0.54% for SCERS and 0.55% for WSIB.”

Philip Tencick, executive director of the Spokane City Employees’ Retirement System, echoed Davis’ sentiments. “We don’t feel it’s necessary,” Tencick told CIO. The “permanent nature of [the bill] makes it something we don’t consider,” he said. “The bill has flawed governance and actually increases risk to the plan if it’s enacted.”

“Outsourced CIO options are plentiful and solve a similar problem, and do so without the misalignment of risk,” Tencick added.

In addition, SCERS maintained that it would incur substantial transaction costs of at least $25 million from transitioning all of its public and private holdings to the WSIB. The transfer of these assets and management of them “could result in a severe misalignment with its liabilities and tolerance,” the pension said in a report.

Representatives from Carlyle’s office did not respond to questions by press time. Carlyle is the bill’s main sponsor.

SCERS to re-contract with NEPC

In addition to considering the legislation, SCERS also addressed in its January board meeting its general investment consultant position now that its current contract with NEPC is expiring. SCERS investment staff recommended that the pension re-contract with NEPC for an additional five-year period ending June 2025.

“The Board is permitted and has discretion to re-contract with an investment consultant outside of an RFP if it is satisfied with the level of service and quality of advice. Accordingly, staff also suggests that an RFP process be conducted in 2024 directly prior to when the next contract would expire,” the board said.

At its January meeting, SCERS staff also outlined their 2019 investment plans, a summary of which is below: 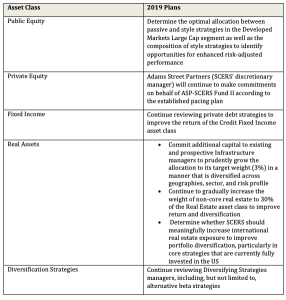