[A version of this story will appear in the December issue of Chief Investment Officer.]

By the time you read this sentence, Russell Investments may be no more.

If you read this in November, Russell will likely remain what its official biography claims it to be: an industry-leading asset management and servicing business with a global reach but humble Seattle roots.

If you read this in December or beyond, that may not be the case. Sometime that month, insiders say, the London Stock Exchange (LSE)—which in June purchased the firm from Northwesternern Mutual for $2.7 billion—will decide whether or not it wants to sell everything but Russell’s vastly profitable index business. According to multiple former and current Russell employees, this is exactly what it plans to do.

In this scenario, a quick auction will see a private equity or non-American financial firm, looking for a foothold in the US market, take over the venerable remains of Russell.

But whenever you read this, what you’ve been told about Russell Investments—its history, its people, its place in the market, and its future—is wrong. 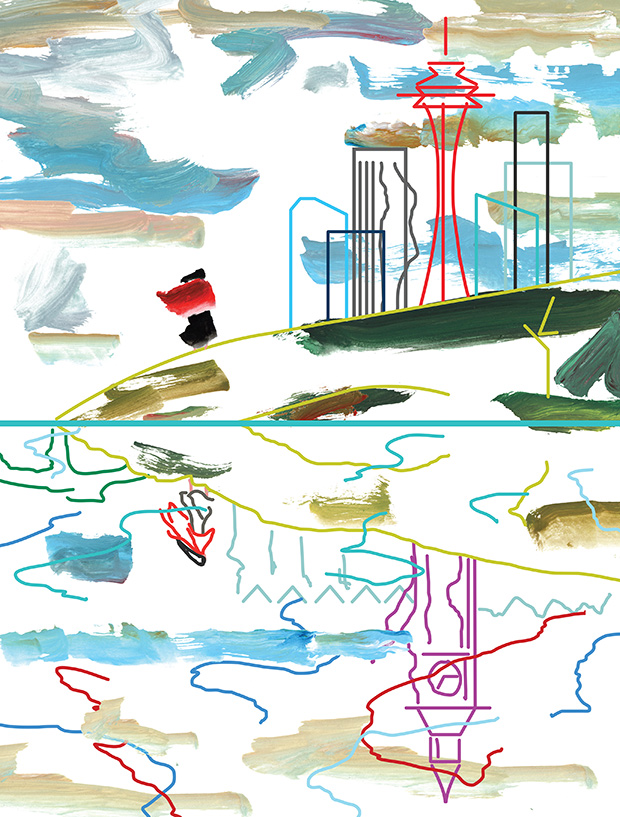 So what is Russell Investments?

According to the official version, Russell is four things.

It is a large and global consulting business, although one that is no longer accepting smaller clients and that the firm prefers to downplay in its marketing and public relations efforts. It has $2.4 trillion in assets under advisement, gathered over four decades in the industry—an industry, according to company lore, that George Russell (grandson of founder Frank Russell) pioneered.

It is an investment manager. Besides defined contribution, multi-asset capabilities, and liability-focused expertise, this includes an outsourced chief investment officer (OCIO) service for institutional investors. By most measures, its OCIO business is the world’s largest, ranking ahead of SEI and Mercer in total assets under control. Overall, it manages $256 billion.

It is a portfolio implementation business, offering transition management, currency operations, and other trading services under the banner of Russell Implementation Services (RIS). Polls of transition management users, including surveys by this magazine, have Russell consistently outpacing its competitors, admired for honesty, transparency, and performance. RIS’ other execution services are equally well respected.

And it is an index business. Born in 1984, Russell’s indices measure manager performance and dominate the American equity benchmark market. Globally, $5.2 trillion are benchmarked against them.

The unofficial version of Russell is different.

“They are known as a consulting firm. They are not a consulting firm,” says someone familiar with Russell’s consulting business. (Russell declined to comment for this story.) “The consulting arm is great for Russell’s brand, but it’s not a leverageable business.” At its core, insiders say, consulting is an enabler of other business lines.

It’s not just Russell facing such problems, this individual believes. Consulting “won’t ever be a high margin business for Russell or any other consulting firm,” he says. “You can even argue that it’s not very profitable at all—but you keep it because it gives you brand awareness, the ability to talk to smaller institutions, distribution, and a quality of research. It’s a story that resonates very well, but it’s just not a moneymaker. Absolutely, it will survive—it just won’t thrive.”

What consulting enables are Russell’s other service branches such as OCIO, although there is a misalignment of sorts, according to another informed source. “Outsourcing, trying to take over the whole fund, is not going to happen at the larger end, which is where Russell traditionally consults,” he says. “For small or midsize funds, it can work.”

It’s also an enabler for RIS. Automation and fee pressures—transition management, for one, is “a business where margins are shrinking and players are exiting”—have this sector under pressure, according to one of the firm’s competitors. RIS employees also reportedly face an identity crisis: They are “thought of internally as an investment function, not just a trading function,” one insider says. “Whether this is the way they should be thought of is another matter.”

And then there is the indexing business. Consulting does little to enable this $170 million revenue stream, which houses just 130 of Russell’s 1,800 employees. While Russell might disagree, multiple observers note that of all four businesses, the indices could most easily be run as a standalone business without suffering.

The sale itself has hamstrung the daily operations of these four business lines, both in the US and globally.

The OCIO unit, for one, has been damaged by the uncertainty surrounding Russell’s future. “When it comes down to three OCIOs in the finals of some deal, it’s tough to be Russell right now,” one competitor says. “When you get to the final three, in reality very little differentiates them. If a small endowment investment committee has to choose between three firms they see as largely the same, it’s going to be way easier to just kick out the one with the uncertain ownership and future.”

Uncertainty has shaken the global business, as well. For example, the firm’s Australian arm—which by some estimates contributed approximately 5% to 10% of Russell’s global revenue at its peak—has suffered. Two senior ex-employees in the region recently acknowledged that while “consulting was always generally known to be a gateway for the other business lines, they have lost a lot of their clients recently.” Towers Watson has been the beneficiary of Russell’s troubles, they say. These two do not believe the losses will be reversed. “There are no shortage of Russell résumés in the market,” one says.

LSE is not buying the official version.

This became clear on June 26, the day that the acquisition was announced. In a hastily organized analyst call, LSE Chief Executive Xavier Rolet and CFO David Warren spent 17 minutes explaining the benefits of combining LSE’s FTSE index business with that of Russell, while only briefly paying lip service to the asset management division. This was despite the reality that the division contributed 82% of Russell’s 2013 net revenues.

About the only thing they would say about Russell’s primary business was that they were commissioning a “comprehensive review” of how it might fit into LSE’s current, and decidedly non-asset management, structure. (Connecticut-based investment management consultant Casey Quirk is conducting the study.)

For the remaining 38 minutes of the call, the analysts—in the politest way possible, given their mostly British accents—attacked. Representatives of Barclays, Bank of America Merrill Lynch, UBS, HSBC, RBC, and others repeatedly brushed over the benefits of the indexing merger and focused on investment management. The two executives’ responses were always the same: Little comment beyond “comprehensive review.”

Did they really see themselves as an asset manager in five years time, one analyst asked?

Were there elements of the investment management business that fit better than others?

Were there any synergies between the asset management unit and LSE?

And so on. When pressed, Rolet and Warren directed analysts to wait on an August circular that they claimed would offer further insight.

When the circular came out, analysts and anyone else could see just how badly LSE wanted Russell’s indices. In 2013, the service line earned $170 million in revenue, the document revealed. The rest of Russell brought in $784 million, net of fees paid to third party managers (reportedly substantial). Of this, insiders estimate that approximately $100 million originated from RIS, $40 million from consulting, and the remainder primarily from investment management (IM). Unsurprisingly, profits skewed towards indexing: operating profit for that business line neared 50%, while the rest of the company hewed closer to 17%, according to the circular.

Also embedded within the circular’s listed risks was this: “After completion, the enlarged group expects to separate the IM and index businesses of Russell as part of the integration of Russell’s index business with LSE’s operations.” LSE, as expected, declined to clarify whether this implied a sale of the investment management arm. LSE also refused to comment on other matters raised in this article.

Yet there is wide speculation that LSE will sell the consulting and asset management units to either a strategic buyer or a private equity firm. Multiple private equity principals, none of whom were willing to speak on the record, admitted to preparing bids for the non-indexing businesses. “It is generally acknowledged that they will soon be up for sale,” one principal recently said.

Goldman Sachs—one of Northwestern Mutual’s bankers on the sale to LSE—“had more than 100 interested parties who wanted into the original process,” one person familiar with the original sale says. “They narrowed it down and ran a fairly efficient auction.” Not all 100 will want the asset management and consulting business on its own, but some certainly will. “In this case, LSE can go to a narrower group. I would not expect a quick deal with private equity or a strategic, though—they wouldn’t just do that deal without a broader process.”

“They can be separated—and they are truly separate businesses,” one person intimately acquainted with Russell says. “Len Brennan”—the current CEO—“believes differently, and has tried to keep them integrated.”

Despite an apparently successful sale, Northwestern Mutual has also drawn criticism for its oversight of Russell since the 1999 acquisition. “It was poor governance on the part of Northwestern Mutual not to have insisted that the business units be run separately enough that they could be sold separately,” another person involved with the sale process says. “They left a lot of value on the table in not doing that. Hardly anyone wanted the whole thing—so they severely limited the universe of buyers.”

The universe of buyers could now be LSE’s concern, of course. “All told, the consulting, asset management, and RIS businesses could be sold for about $1 billion, if that’s what they choose to do” the source says. That’s not pocket change, but the math on the $2.7 billion sale price is striking: $1 billion for 82% of Russell’s business by revenue implies a valuation somewhere near $1.7 billion for the 18% of revenue brought by the indices.

“They can be separated—and they are truly separate businesses,” one person intimately acquainted with Russell says. “Len Brennan”—the current CEO—“believes differently, and has tried to keep them integrated.” If a strategic buyer steps in, multiple insiders suggest Brennan may stay. If a private equity buyer intent on cutting costs wins an auction, his future is less certain. Either way, sources say, “he probably has the financial freedom to choose.”

LSE and its management team are near universally respected, garnering fierce loyalty from shareholders. And yet Rolet and Warren bought Russell, nose-to-tail. Does LSE actually want to enter the asset management market, as one analyst on the June 26 call so skeptically asked? Or was purchasing the whole package the price of creating a global indexing business?

The consensus is that it was. Analysts on the call acknowledged the “obvious” benefits of merging the FTSE and Russell index operations. Indeed, should the marriage sour, these analysts’ eagerness to accept the theory could prove embarrassing.

The investment management business is itself a quality asset, one former employee points out. “It’s just that it’s not what an index provider would want.” LSE bought it, she and others speculate, because that was the easiest way to acquire Russell’s indices—and because they knew that they could eventually split off and sell it. (This outcome can be viewed in the same light as the recent spate of corporate divorces—HP’s cleaving hardware from servicing, for example—one source muses.) Analysts may have initially been puzzled, but most insiders agree that if LSE succeeds in decoupling Russell, it may have executed a masterstroke.

Any buyer of the non-index division takes on a strong upside. The business runs at margins near 15%. For typical asset management firms, margins are much higher. “This doesn’t mean it’s not a good business,” says one person in touch with the firm’s inner workings. “It’s just been allowed to run at a lower margin than it should. LSE could change that. But will they?”