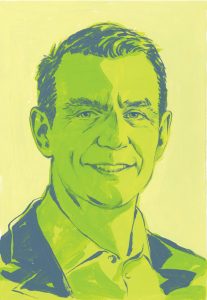 Brian Pellegrino had been a fixture at UPS, but he surprised the industry when he switched from his 37 year career at the company to become the CIO of the Georgia Tech Foundation recently. It begged the question, what was alluring enough to make him jump from almost four decades at his corporation to a $1.8 billion endowment?

To Pellegrino, who has had a strong track record of success with his consistent annualized 8.75% returns, it was “the right opportunity at the right time,” he told CIO.

The biggest difference in his new role, however: he will no longer be managing through a pension liability lens. His assets will be used to support the university and education system.

Pellegrino’s choice demonstrates a larger trend, say executive recruiters from the Prince Houston Group who facilitated the match. Endowments and foundations aren’t just seeking to hire chief investment officers from other endowments and foundations. Like Mark Schmid, who left Boeing to head to the University of Chicago, and Lisa Mazzocco of USC, who was recruited from Los Angeles County Employees Retirement Association.

“There’s much more crossover today than we have seen in the last several years,” said Marylin Prince. “We, as recruiters, have gone outside of this specific universe to find that talent and we’re looking at corporate pension plans, public funds, family offices and investment management firms.”

When CIOs switch from corporate plans, they often enjoy more freedom at endowments and foundations as they’re able to trade quarterly and annual earnings pressures in publicly traded companies, for a longer term horizon, “so it allows them to explore, a wider range of investment opportunities,” said Jim Houston.

Pellegrino was chosen due to his strong track record of success, leadership, investment acumen and cultural compatibility. During the job interview, there was an instant connection that went beyond the Georgia locale.

“He inspired confidence really across all of the board members he met for having a point of view on the broader markets. He is taking over a good portfolio and showed his ability to build upon it,” said Houston.

Similar to endowments and foundations, UPS has a very low allocation to fixed income, and Pellegrino had made effective use of alternative investments. “Because we had open plans and long dated liabilities, we were not LDI investors. We also had a governance structure that gave us the autonomy to pursue unique investment structures,” he said.  His experience translated well into the endowment space, which also has a high allocation to alternatives.

When asked, Pellegrino is quick to note that the timing was perfect, as he became retirement eligible in January 2018.  Under UPS policy, Pellegrino was eligible for full retirement benefits because he will turn 55 and have more than 25 years of service.  Although Georgia Tech was not on the radar in January of 2016, UPS was well aware of Pellegrino’s upcoming retirement eligibility.  His successor at UPS is a 17 year UPS veteran with a strong finance background.

Pellegrino said he was swayed by Georgia Tech’s reputation as one of the leading technological research universities in the country.  Spending almost $800 million in R&D expenditures for 2016, the university works closely with both industry & government to help solve their toughest problems.  Managing a pool of assets to support this research and other initiatives at the university makes this a very exciting opportunity.

And Pellegrino is a builder. He started at UPS’ investment office in 2005 with a team of three, built it to 25, and grew the portfolio from $12 billion to $37 billion. Similarly, he’ll start at Georgia tech with $2 billion and a team of three, succeeding the former CIO, Jim Taylor, who retired in June.  Jim successfully established a strong investment foundation, creating a portfolio that achieved north of 14% returns last year.  Now, Pellegrino said, “the Georgia Tech Foundation is ready to take things to the next level”, continuing to improve their investment process, governance and compliance programs.