Home > News > Risk > What Would a Cure for Cancer Do to Your Liabilities?

Members of defined benefit (DB) pension funds have enjoyed greater improvements in longevity than the wider population, according to research.

The UK’s National Association of Pension Funds (NAPF) and longevity specialists Club Vita published detailed research into 2.5 million pensioners and 1 million deaths in the UK, which the organisations claim will result in a 1% rise in liabilities for UK pensions due to “more informed liability calculations”.

Steve Hood, longevity consultant at Club Vita and a co-author of the report, said the data would help pension funds in the UK create “bespoke longevity trend assumptions that reflect their unique membership profile”.

“Until now there has been very little information available on how longevity has been changing for DB pensioners, which as this research shows, experience different trends to the population as a whole,” said Jackie Wells, head of policy and research at the NAPF.

The research included models of six scenarios with different factors impacting on live expectancy. These ranged from severe resource constraints and a dissolution of the National Health Service (NHS), leading to a decline in life expectancy, to the discovery of a cure for cancer bringing about a significant step up in longevity.

Using the refined data set, the report estimated that the eradication of cancer as a terminal condition between 2025 and 2035 would bring about a step change in longevity, meaning that well-off men and women retiring at age 65 in 2040 could expect to live another 25.1 and 26.5 years on average respectively. This compares to “typical” projections based on existing data of 23.5 years for men and 24.9 years for women. 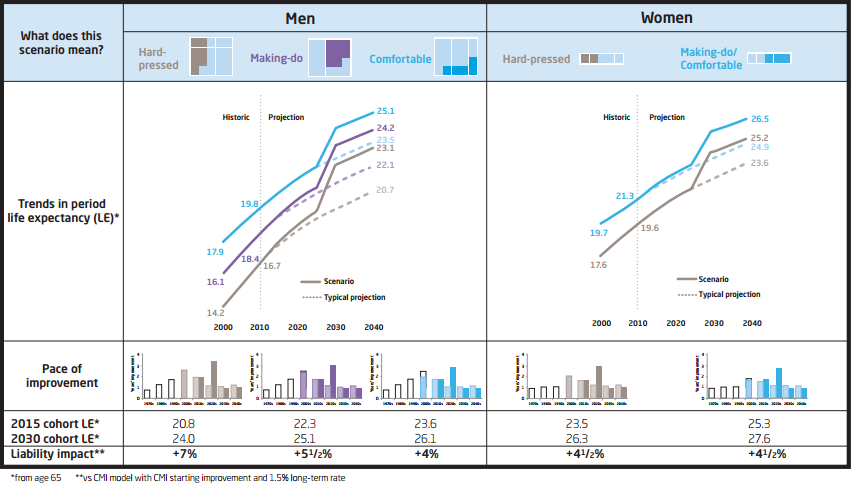 The predicted effects of the discovery of a cure for cancer on life expectancy at 65. Source: NAPF/Club Vita.

Another scenario took into account the effects of climate change and declining levels of fossil fuels. The report assumed an impact on fuel prices, “severe” constraints on healthcare funding, and rising food costs. This would impact more on the “hard-pressed” group, with the report predicting a decrease in life expectancy at age 65 for men and women in this subset by roughly two years.

“Future change in life expectancy is one of the great uncertainties for pension schemes, but it’s a really important assumption,” said the NAPF’s Wells. “Ultimately, the decision that pension schemes make on the removal of risk—perhaps via longevity swaps or buy-in/out—is highly dependent on their view of how longevity will change in the future.”

She added that the project’s results would help pension funds “set longevity trend assumptions for DB pensioners based on the experience of DB pensioners”.

The research also demonstrated that life expectancy improvements vary significantly according to wealth. Male pension fund members deemed to be “hard pressed” saw their life expectancy at age 65 improve by 2.5 years between 2000 and 2010, while better-off males experienced an improvement of just 1.9 years.

The full report can be viewed here.

Related Content: Is Longevity Risk Dead? & US Companies ‘Must Pay $110B More to DB Plans’