Home > News > Market Moves > What Will Happen to Stocks a Year After the Fed Cuts Rates?

A lot of investors expect the Federal Reserve to walk back its 2018 increases in interest rates. How would a rate cut be received by the stock market? And we’re not talking about right away, when the reception doubtless would be euphoric, but over the next six and 12 months?

The answer, according to research by LPL Financial, is that overall, the market does well over these periods—unless there is a bear market/recession waiting in the wings. Then look out below.

Today, while forecasters don’t see a downturn in the near future, plenty of pessimistic scenarios are around that see one sometime in 2020. But recall that in 2007, the last time a major rate-cutting cycle began, a number of strategists were saying that the subprime mortgage slump could be “contained.” Well, it wasn’t.

“The previous two times the Fed cut rates for the first time in 2001 and 2007, we saw stocks eventually get cut in half,” explained LPL Senior Market Strategist Ryan Detrick. “But the reality is if you go back further in time, you can also see explosive rallies after that first cut.” 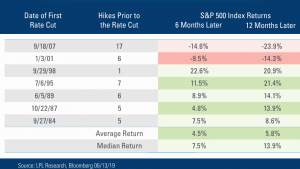 In the six months after Sept. 18, 2007, when the Fed started its most recent easing, the S&P 500 lost 14.6%. And 12 months following the initial rate decrease, Lehman Brothers declared bankruptcy—actually, that was on Sept. 15, 2008—and the financial crisis was underway. Over that 12-month period, the benchmark index slid 23.9%.

The situation was similar in early January 2001. After that cut, the S&P dropped 9.5% and then 14.3%. In this case, stocks actually had begun to slip in early 2000, mostly due to the bursting of the dot-com bubble.

For the other instances of rate cuts, in the LPL study, which covers the last third of a century, the economy was nowhere near a recession. Thus, the median returns for the market a year after the initial rate lowering was 13.9%.

The hairiest time came in October 1987, when the market lost 20.5% on one day (Black Monday, Oct. 19). But a few days later, the Fed pushed down rates. The market calmed down from the panic, and then enjoyed a strong advance. A recession didn’t crop up until three years later.

Right now, the Fed is on hold, following a long campaign to increase rates from near-zero, a level designed to combat the Great Recession. In 2018, it hiked rates four times, with the last quarter-point bump up in December.

To LPL, the current environment “suggests a potential rate cut over the coming months might not be as worrisome as many make it out to be.”

Related Stories:
What Would It Take for the Fed to Lower Rates? Very Bad News

We’re in the Longest Bull Market in History, or Are We?

How Stock Price Volatility Broke All the Rules