The funding ratio of 107 city and county retirement systems increased by more than 4 percentage points in 2017, to 71% from 67%, reports Wilshire Consulting.

“Robust investment returns and contributions also drove asset values higher for the year,” said Ned McGuire, a managing director and a member of Wilshire’s pension risk solutions group. Wilshire also found that 93% of plans in the study “have market value of assets less than pension liabilities or are underfunded,” McGuire said.

The firm also found that this growth reversed two years of declines. Systems saw a $22.7 billion decrease in shortfalls, from $233.3 billion to $210.6 billion.

The diminishing shortfalls are a result of an average boost in assets values by more than 10%, growing from $464 billion in 2016 to $514.8 billion in 2017. The value is the highest since Wilshire began conducting its annual report on city and county retirement systems and their funding levels and asset allocations in 2002.

A lot of this has to do with pension plans lowering their discount rates, a growing trend in the space. Almost half of the plans in the report have lowered their rates between

The average city and county pension portfolios allocate 64.3% to equities, which includes real estate and private equity. They also allocate 24.7% to fixed income. The last 11% goes to other assets, such as cash and infrastructure. 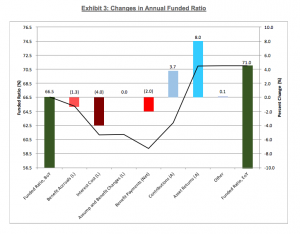