Discussing everything from divesting from fossil fuels to calling for companies to provide carbon footprint data, 450 investors with $30 trillion in assets under management convened at the United Nations on Wednesday to discuss the next steps investors must take during the eighth Investor Summit on Climate Risk. The day featured a panel where some of the world’s top investors detailed their “Next Steps on Climate Change.” 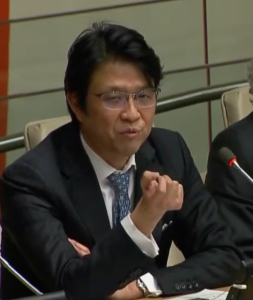 Hiro Mizuno, executive managing director and CIO of Japan’s $1.5 trillion Government Pension Investment Fund, (GPIF), which manages a globally diverse portfolio including more than 6,000 globally listed companies and government bonds across the capital markets, said his fund is designed as a “super long-term investor” as a part of a 100-year sustainable public pension fund scheme of the Japanese government. Mizuno seeks to reduce exposure to short-term volatility, and “increase exposure to long-term sustainability of the portfolio” by taking a systematic approach across asset classes.

“We just try to integrate [Environmental, Social and Governance] ESG into our portfolio management across all the asset classes, and also globally,” Mizuno said. Since he outsources 100% of the equity portfolio to external money managers, he’s been fine-tuning methods to make it more sustainable, primarily through indexing and benchmarking. He is requesting proposals from index vendors to create a new global environmental index, and plans to put “a significant amount of money behind it” to make the benchmark more sustainable. He’s also calling for asset managers to integrate ESG factors into their investment analysis, and urges them to engage directly with companies on the significant ESG issues. 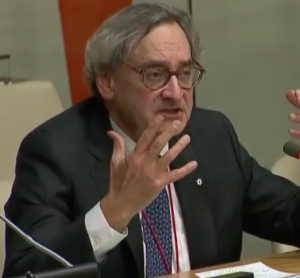 Michael Sabia, CEO, of the $250 billion Caisse de dépôt et placement du Québec (CDPQ), said climate change now enters  every investment decision CDPB makes across its asset classes by triangulating return, risk, and climate impact. To do it, CDPQ has developed carbon budgets, Sabia told the room of investors. “Every asset class and every investment team has a carbon budget, and they have to live within that in the same way that they have to live within a risk budget,” Sabia said.  CDPQ has also committed to a 50% increase in low-carbon assets by 2020. Today, it invests some $18 billion in renewables, highly energy-efficient businesses, and transportation systems. It has a goal to lower the carbon intensity of its portfolio by 25% by 2025 by gradually decreasing the carbon budgets. It also plans to work with its portfolio companies in North America and Europe to improve disclosure, share best practices, and encourage a reduction in emissions—all aimed at changing corporate behavior. “And then, finally, we will report on all of that on an annual basis,” he said, with a goal to be transparent and accountable. 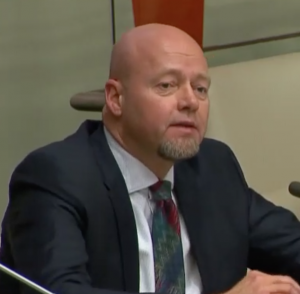 Yngve Slyngstad, CEO of the $1 trillion Norges Bank Investment Management (NBIM), known for setting expectations for corporations in its portfolio, is invested in more than 9,000 companies around the world with total equity investment approaching $700 billion, and an average ownership of the world equity market of 1.4%.  As a long-term loaner, “development of the economic sustainable growth for the long-term is in our core interests,” Slyngstad said.

Climate change has been an NBIM focus area since 2005. After much dialogue with companies and investors, NBIM created an “expectation document” to look at issues on a company level, calling for an increase in the level of disclosures on things such as carbon footprints.  He is constantly fine-tuning the process to have “clearer numbers” detailing how the portfolio is exposed, as well as the carbon footprint of the entire portfolio. “We have calculated our current carbon footprint at around 100 million tons a year,” he said. He’s also asked 55 banks to examine their lending portfolios. “From our point of view, to go from words to action, you have to have the middle step of getting the numbers in place. So, our key master share today is a very simple one: We will encourage companies, but also investors, to focus on getting good numbers, and in more detail that they can report on to get measured and managed. Eventually that will have consequences for companies and the investors.” 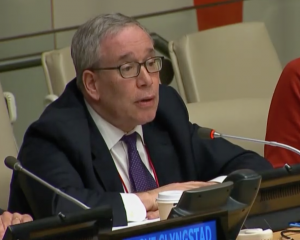 Scott Stringer, comptroller for the city of New York and its $193 billion in assets under management, is a participant in the  recently launched Climate Action 100, a five-year initiative led by 256 investors with $30 trillion in assets under management, to urge the world’s largest corporate greenhouse gas emitters to improve governance on climate change, curb emissions, and strengthen climate-related financial disclosures.

He is also part of the Boardroom Accountability Project, which uses proxy power on fossil fuel producers and other companies to establish goals for reducing their greenhouse gas emissions. His pension funds already have $3.6 billion invested in clean and renewable energy and energy-efficient assets, representing about 24% of the infrastructure portfolio and 40% of its private real estate assets. In addition, New York City is setting a formal goal of divesting from fossil fuels over the next five years. “I recognize it’s a complex process and won’t be easy,” he said. “But crunching the numbers and making a plan consistent with our fiduciary duty is something we believe we must do, because moving toward divestment, in some respects, is the future, because the stakes are so enormous.”

Investor interest has vastly increased from when the summit was first launched 15 years ago.

“If you look at the people who spoke today, whether it’s Goldman Sachs, or Japan’s pension fund, it’s people who manage trillions, not billions of dollars,” Mindy Lubber, CEO and president of Ceres, told CIO. “And they’re saying they’re acting on climate risk. That’s not [joining hands and singing] kumbaya. That’s real dollars.”