Hooray: Come July, this will be the longest economic expansion in US history. But boo: While the length is remarkable, the strength is not—in fact, it is the worst showing in postwar history.

Previous expansions have fared significantly better than this one, according to the National Bureau of Economic Research. The average annual increase in gross domestic product (GDP) during the current expansion is a blah 2.3%.

On July 1, the nation will log the most extensive spell of economic growth on record, 10 years and running. It started in mid-2009, following the horrendous Great Recession.

The current 121-month growth cycle edges out the previous longevity record holder, from the 1990s, 120 months. That prior period was fueled by a surge in technology improvements and stretched from March 1991 to March 2001, when the dot-com bubble popped.

The best growth periods were in the late 1950s through the early 1970s, when the postwar boom was at its most robust, with the GDP’s rate of increase topping 5%.

Why has the present cycle’s growth pace been so tepid? Republicans blamed President Barack Obama’s increased regulations for hampering GDP expansion. In Obama’s second term, however, the tempo picked up, hitting a peak of 2.9%. That equaled last year’s showing under the regulation-trimming Trump administration.

Perhaps the best explanation for the anemic growth is that the Great Recession shocked consumers and businesses so thoroughly that they took a while to get out of their funk—and to a degree still are.

In fact, the second most lackadaisical expansion was the one from the previous decade: November 2001 to December 2007, which the housing boom powered and the sub-prime mortgage debacle ended. The lack of inflation-adjusted income raises was being felt then, a condition that continues today, which may be impediments for both expansions. 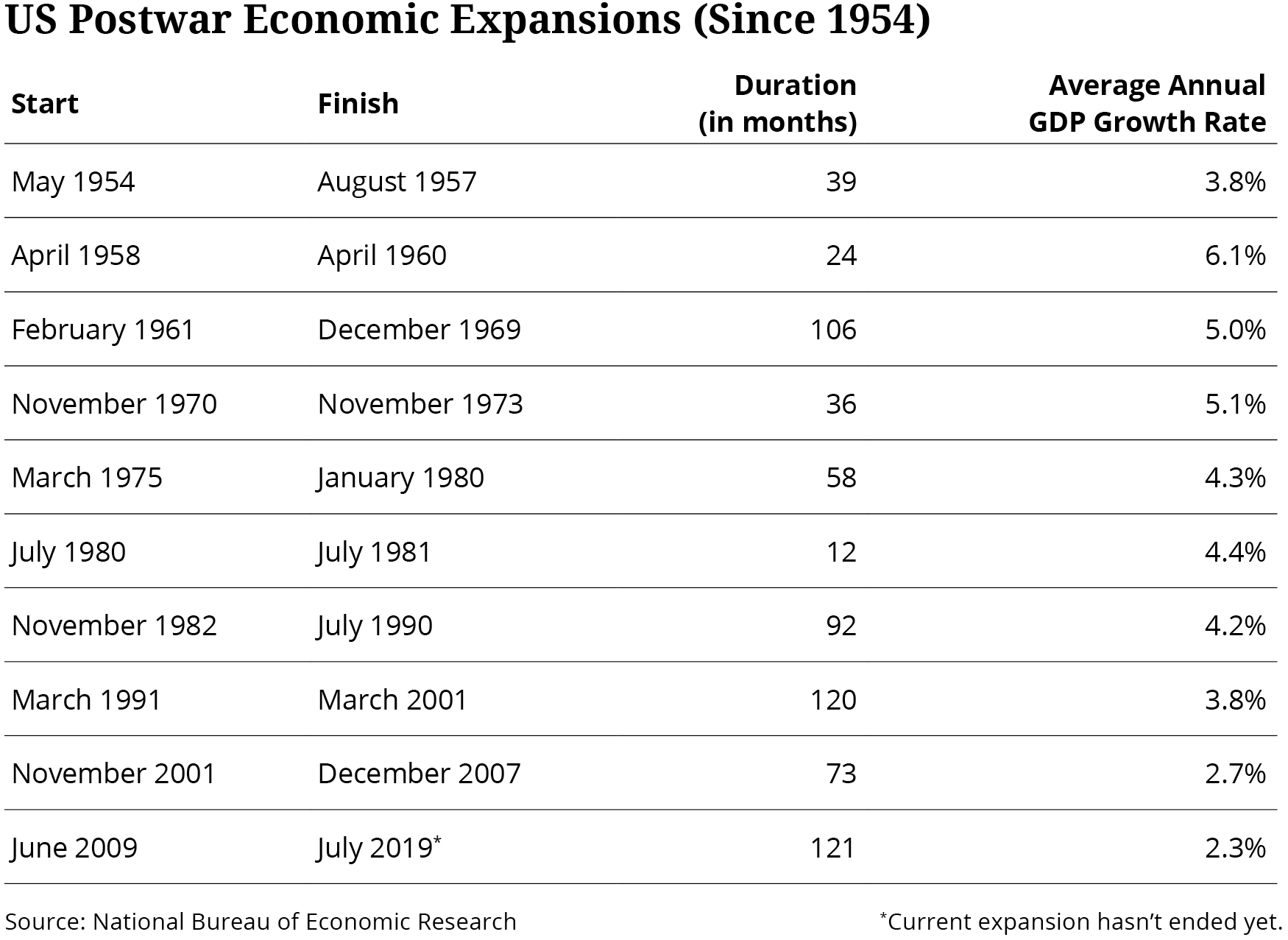 This expansion has had plenty of bumps along the way, when a lapse into recession seemed possible, and even likely. In the early part of the decade, the European sovereign debt crisis seemed to be a fatal threat. So did the oil bust in 2014-15.

The all-time champ internationally of up-cycle length is Australia, whose economy has been expanding for 28 straight years. That owes a lot to its prodigious amounts of natural resources and a (relatively) steady customer in growing China.

What lies ahead for the US economy? Periodic forecasts of a recession in 2020 crop up. A poll by the National Association of Business Economists in May found that 60% expect a recession next year. Whether things get that bad remains to be seen, but a broad consensus exists that a slowdown in growth is forthcoming.

If President Donald Trump ends up slapping tariffs on the remaining $300 billion in Chinese imports to the US (25% levies already are imposed on $200 billion worth), that wouldn’t help.

“The global growth landscape remains uneven and corporate earnings expectations are likely to continue declining,” wrote Bob Doll, the chief equity analyst at Nuveen Asset Management, in a research note this week. And he was the guy who early this year predicted this expansion would be the longest.

Economic Growth: These Are the Good Old Days

Trade War Could Shove US into a Recession, Morgan Stanley Says