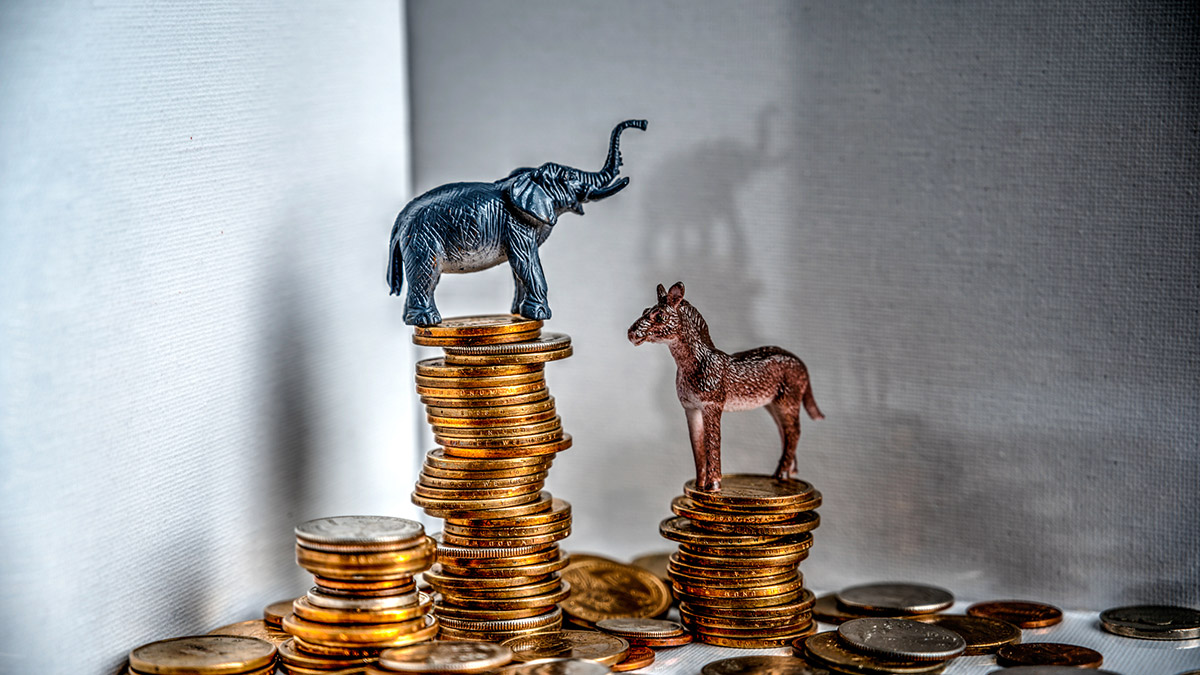 What will happen to the economy and the stock market if the Democrats make a clean sweep in November’s election, taking over the White House and both houses of Congress?

In terms of economic growth, Democratic ownership of the presidency and both congressional houses led to the highest average gross domestic product (GDP) increase, an average of 4.0% per year, according to tabulation by LPL Financial, going back to 1950.

Think of the booming 1960s economy in the Johnson years.

The second best, at 3.6%, was when a Democrat occupied the Oval Office and the GOP had both sides of Capitol Hill (much of the Clinton era, for instance, in the high-growth 1990s).

How the stock market did is a little different. With a Democratic president and Republican majorities in both houses (Clinton and the second Obama term), the S&P 500 returned the best, 18.3%. Second best was a Republican as president and a split Congress, at 17.9% for stocks. The Reagan tenure exemplifies that.

How the Economy and Stocks Perform under GOP and Dem Control

A blue sweep in 2020 might not be as bad for stocks as some investors fear. UBS and JPMorgan think that might even be good for the market.

Right now, Joseph Biden, the presumptive Democratic nominee, holds an 11-point poll lead over President Donald Trump. “President Trump’s popularity and poll numbers have been dropping sharply in recent months,” pointed out Bob Doll, Nuveen’s chief equity strategist, in a research note last week. “And the possibilities of a Democratic sweep of the White House and Congress are growing.”

Party control of the White House since 1950 has shown vastly more recessions for the Republicans (10 versus one). Yet when you throw in the split government factor, things get more complicated. Perhaps what party runs Congress helps, or hinders, a sitting president’s impact, via policies he is able to enact, on economic growth and the stock market performance that parallels it.

In the post-World War II world, the Democrats’ New Deal dominance of both ends of Pennsylvania Avenue became more sporadic. From 1950 through the 1970s, Democrats ruled both chambers on Capitol Hill except for Republican Dwight Eisenhower’s first two years, when the GOP briefly captured majorities in the House and Senate. A bipartisan comity prevailed in those days, and Ike easily won approvals for his agenda, such as building the interstate highway system.

Divided government and increasingly nasty partisanship became more common since the 1980s. In his eight years as president, Ronald Reagan (he took office in 1981) had six years with fellow Republicans controlling the Senate, and the Democrats reigning in the House throughout. Those six years of split government were his most productive. He passed a large tax cut and an overhaul of the tax code, plus he launched a military buildup.

Republicans reclaimed control of the House and Senate in the 1990s during the last six of Democrat Bill Clinton’s eight-year presidency, which featured the defeat of his health-care initiative and his impeachment. Two-term Republican George W. Bush had a split Congress for his first two years, then his party took charge of both houses, up until his last two. He delivered a tax cut, not to mention boosting anti-terror security and starting a war in Iraq.

Barack Obama, a Democrat, also had just two years of his party’s commanding the House and Senate, which he used to enact his government-backed health plan and a crackdown on Wall Street. Republicans took the House in 2010 and the Senate in 2014, pretty much ending Obama’s agenda.

Republican Trump’s first two years allowed him the luxury of majorities in both houses, and he enacted a big tax cut, named two justices to the Supreme Court, and pared many Obama-era regulations. In his last two years, though, the Democrats won back the House, which voted for his impeachment (he was acquitted in the Senate, like Clinton, although Clinton prevailed in a Republican upper chamber).

The political landscape of 2020 is so discombobulated, with a pandemic and a recession under way, that past norms may prove to be meaningless.

3rd Year of a President’s Term Is Best for Stocks, Report Says

Trump Is No. 2 Earnings Grower Among Post-WWII Presidents