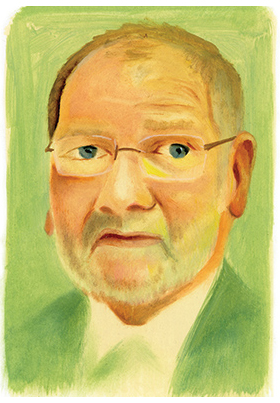 (Art by Chris Buzelli)John Corrigan is to retire from his position as chief executive of Ireland’s National Treasury Management Agency (NTMA).

Corrigan—a veteran of CIO’s Power 100 list—will step down on January 4, 2015, having led the NTMA through Ireland’s recession, financial crisis, and bailout. The NTMA oversees the management of the country’s National Pension Reserve Fund.

Corrigan will be replaced by Conor O’Kelly, deputy chairman of Investec’s Ireland operations.

“I would like to thank John Corrigan for his leadership of the NTMA and for his counsel to me during an extremely challenging period in Ireland’s recent history,” said Michael Noonan, Irish minister for finance.

Noonan said Corrigan had helped the NTMA make “a very significant contribution to Ireland’s recovery,” citing its role in helping the country exit an €85 billion ($106 billion) bailout programme, instigated by the European Union and the International Monetary Fund in 2010.

Willie Walsh, chair of the NTMA’s advisory committee, also thanked Corrigan for “the tremendous commitment and surefooted manner in which he managed Ireland’s full return to the sovereign debt markets” in 2012.

Before joining Investec, O’Kelly was chief executive of Dublin-based NBC Group and led a management buyout of the company in 2003. NBC Group was later bought by Investec.

Walsh said O’Kelly’s experience “will be invaluable to the NTMA as it manages the wide range of commercial and market-facing mandates that Government has entrusted to it.”