Things you can get sued for, if you run or manage a US defined contribution­ (DC) plan:

There is one common thread linking defendants—but good luck avoiding it: DC plans worth upwards of $1 billion.

“They sue where the money is,” says one large-plan CIO. “We’re all going to get sued eventually—that’s what I told my team.”

Jerry Schlichter—the industry’s most feared attorney and chieftain of the 401(k) lawsuit epidemic—thinks plan sponsors should be afraid, very afraid.

“It’s a good thing that they’re worried about the risk of litigation,” says Schlichter, who successfully argued the landmark Tibble vs. Edison case in front of the Supreme Court. “There should be concern about violating ERISA”—the Employee Retirement Income Security Act, which is at the core of most DC plan litigation. “The only protection for participants is the law. Without that being a concern, it’s the Wild West. The incentives to avoid doing the wrong thing should be there.”

But when the “wrong thing” can be anything and everything for a mega-defined contribution plan, litigation warps incentives. Rather than playing offense for members, some 401(k) heads admit they’re playing defense against Schlichter.

“If I do something that’s optimal for my people, some lawyer may look at that in a vacuum and come after me,” laments one Fortune 500 CIO, who agreed to speak candidly on the condition of anonymity. “Our decisions were already made in the best interests of plan participants, because if one wasn’t, in the back of your mind, you know that was something they could come at you for. And now, since all of these lawsuits, the sponsor-participant alignment’s no longer there.”

Take member education, for example, which plan sponsors typically want to provide. But it’s a murky line between educating and advising—and crossing it has perilous compliance consequences. “We have this major catch-22,” says the CIO. “You want to inform people to make better decisions, but you run the risk of getting sued because you inform people. It’s a crazy system.”

This echelon of plan sponsors—sophisticated investors who’d board a plane piloted by flight attendants before putting HR in charge of DC—weren’t overly shaken by the Supreme Court’s unanimous ruling against Edison International. Paying retail for mutual funds as a big-dog institution? Woe betide the deputy to propose that. Setting-and-forgetting an investment menu for decade? A firing offense. But five months after the ruling, this tight-knit group saw one of its own go down.

“Intel—that was a real wake-up call for the industry,” says the CIO. “My initial reaction was, ‘Wow. You can get sued for anything.’ My second reaction was, ‘It’s better to be a follower than a leader in this space.’ Because if you stick your nose out, someone will chop it off. You try to do something innovative and intellectually sound, you’ll get targeted for it.”

On October 29, 2015, hardware engineer Christopher Sulyma and his coterie of six attorneys filed a lawsuit against Intel’s finance, investment, and administrative committee members, claiming breaches of fiduciary duty. Sulyma was on his third job post-Intel by then, having spent just over two years as an employee and member of its 401(k) plan. But he always intended to be a figurehead victim—the initial complaint asked for class-action status—and it has forced Intel retirement chief Stuart Odell into the same role. 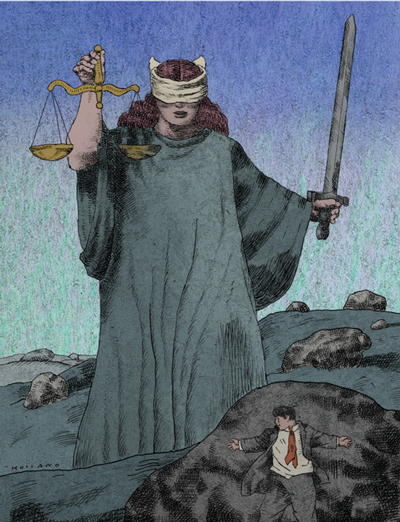 Art by Brad HollandIn Lawyers v. DC Plans, the attackers enjoy two major structural advantages over their targets. First, plaintiff attorneys evaluate ex-post investment decisions that asset owners make ex-ante. Intel’s post-financial crisis hedge fund and private equity allocations were “misguided and imprudent” because they have underperformed a passive Vanguard fund, the argument goes. Intel’s investment committee should have known better from the start, according to the lawsuit. Yet Sulyma’s lawyers took issue with the disclosed alternatives strategy only after the market turned against it.

“It feels like the plaintiffs have moved to a world where every action is judged with the benefit (or burden) of 20/20 hindsight,” wrote David Levine, a lawyer for plan sponsors and advisers with Groom Law Group, in a February column. “ERISA has never required that plans go with the cheapest provider or investment, or demonstrate that every investment decision bore fruit. Instead, ERISA simply requires that fiduciaries utilize a prudent process. The current world of litigation just seems to have gone off the rails in neglecting this fundamental premise of fiduciary prudence.”

The second leg up participant-side attorneys have on asset owners is that they don’t have to win in court to win. “It’s an asymmetric payoff pattern,” one DC asset owner notes. “Law firms have the cost of research if they’re wrong; if they win, it’s potentially millions and millions of dollars. If you penalized lawyers for frivolous lawsuits, there would be a lot fewer frivolous lawsuits.” And for corporate America, settling even a frivolous lawsuit can often be cheaper than litigating it, and answering for the risk on call after call with Wall Street analysts.

Imagine if 84% of elementary school teachers were “not very confident” that their students would be able to read come middle school. Perhaps the onus is partly on students to put down the PlayStation controller and apply themselves. But teachers, you have literally one job.

So do plan sponsors.

And nearly nine out of ten seriously doubt their members’ future retirement security, according to SEI data. If the majority of people in charge of a system believe it’s failing, it is failing. American DC plans desperately need improving, and experts agree how: Make DC more like defined benefit (DB) plans. Without the financial and risk burdens of an actual pension, DC plan sponsors can still deliver many of the model’s upsides. Hedge longevity and pool risk via annuity products. Set realistic default contributions for replacing 70% to 80% of income in retirement. Match asset and liability time horizons. Put experts in charge.

Here’s what no one thinks will fix America’s retirement crisis: Unbundling record-keeping and investment services; replacing money market with stable value funds as 401(k) menus’ cash option (or vice versa); banning company stock. If teachers spent their time avoiding textbook-selection lawsuits or testifying why they’d scheduled a track meet for a rainy day, it stands to reason that the ABCs might get the short shrift.

“The litigation we’re seeing is a negative for plan sponsors’ creativity,” says Joel Lieb, SEI’s head of DC advice. “The Intel case is not doing the industry any favors. On innovation, the question for sponsors becomes, ‘Why? Why would we do this when it makes us more exposed to fiduciary risk?’ But from our perspective, why isn’t it a risk that you know your system is broken and you’re doing nothing about it?”

Mega-plan-chasing lawyers, a piece of advice: Sue Microsoft’s $14 billion 401(k) plan, and prepare for the litigious equivalent of invading Russia in winter. On paper, Microsoft’s plan is consistent with past targets: Massive assets, a cash-rich sponsor, and an outlier in plan design. But the Seattle tech giant has both angles of fiduciary risk—ERISA compliance and member retirement security—locked down.

“We have always had a strong conviction that a fully compliant plan is non-negotiable,” says Sonja Kellen, head of global retirement benefits. “The shifting legal environment doesn’t deter us from trying to be innovative in how we help our employees be financially independent.”

“It’s better to be a follower than a leader in this space. Because if you stick your nose out, someone will chop it off.”Microsoft has cut investment costs for its 86,000 members by more than 20% in the last three years, uncapped company contribution matches, and partnered with Fidelity and Towers Watson on custom tools to get employees on track to retirement readiness (or, in tech-world parlance, “financial independence”). A 30-year-old who goes to work for Microsoft can make one decision—contribute 8%, 10%, or 12%—then ignore retirement planning for the rest of her career. By 65 or so, she’ll celebrate financial independence along with her new senior’s discount.

Kellen and her team have considered, and rejected, most of the innovation toolbox peers rely on. Hedge funds, custom target-date funds, and even auto-enrollment don’t feature in one of the best 401(k) plans around, according to benchmarking firms. “We’ve had the conversation about moving into illiquid or nontraditional asset classes a number of times, and that conversation never ends,” Kellen says. Off-the-shelf institutional products continue to win out as Microsoft’s negotiating power over fees ratchets up. A $14 billion pool of capital divided by 20 or so menu options equals highly motivated providers.

Savings and investments carry equal weight for the plan’s leadership. “We want to make sure we’re nailing them both,” Kellen says. Nailing savings has involved custom portal creation, big data analytics, and staff-specific behavioral science research. Yet mega-DC peers tend to focus their high-touch efforts on investments: Streamlined menus (University of California), custom target-date funds (Exelon, Boeing), guaranteed-income products (United Technologies), real assets allocations (Alcatel-Lucent), and, of course, hedge funds (Intel). “Microsoft has never had a DB plan,” Kellen adds, “and I think that is part of the equation on where we differ from many of our large corporate peers.”

Litigation has followed innovation. That is, straight to the investment side.

Document everything, make sure processes are rock solid, and forge ahead—Microsoft shares these lawsuit-tsunami tactics with at least one traditional mega-plan sponsor. Cindy Cattin rebuilt utility magnet Exelon’s 401(k) following a major merger and drawn-out lawsuit against its DC plan (plaintiffs’ lawyer: Jerry Schlichter). She dropped most mutual funds for collective trusts, cutting participant fees by 50%. A new default custom target-date program wrapped in emerging-market equity, debt, high-yield credit, and core real estate. Then Exelon re-enrolled its tens of thousands of employees. She’d do it all over again, regardless of prowling lawyers. “As long as you keep your process tight, it’s worth innovating as a large DC plan. You also need a full team to support it, because there are a lot of ups and downs in the process. My advice is absolutely to talk to your peers who’ve done it. I found them very willing to share their experiences.”

Once upon a time, Intel retirement head Stuart Odell was such a peer.

“In the DC world, you only have to do as much as the guy next door is doing to attract and retain talent,” Odell told CIO one year and a lawsuit ago. “But I’ve taken a much more paternalistic and philosophical view that we should offer our employees the best investment options out there. Personally, the DC side has been more satisfying than DB.”

As Sulyma vs. Intel moves through California’s district court, now a certified class-action case, Odell’s outlook may have evolved. “On the DC side,” he had said, “once people leave Intel, there’s not much risk remaining with the company.”

Charges of fiduciary breach for the choice of cash option or inclusion of private assets have paralyzed many sponsors, and sent others fleeing to low-fee passive products. Imagine, then, a generation of DC members retiring into poverty, or as Odell says, “an Intel retiree as a Walmart checker.” In that world, Jerry Schlichter’s firm has an even riper target: the failure of American defined contribution.