In a board memo obtained by CIO, Chief Investment Officer Paul Greff’s investment team at the $99.6 billion pension plan advocated the fund rid itself of the program, which is aimed to benefit new money managers. The chief reason for axing the model is that the newbie managers   underperformed its benchmark. 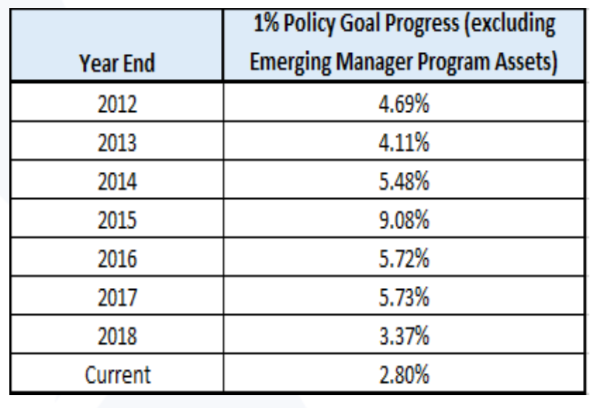 The program invests only in US stocks, covering large, small, and midcap issues. In 2006 the plan set a policy of investing up to 1% of its assets to state- and minority-owned external managers. The fund is still trying to achieve this, as this area encompasses 2.8% of assets, almost triple the goal, without the use of the program.

The program was created in 2012 to favor fledgling managers based in Ohio and also minority-owned firms. The objective was to reduce fees, and also boost performance. Although it did save costs (reductions were 42%), it has underperformed its 13.49% benchmark by 1.58 percentage points yearly since inception.

Only managers with $1.25 billion in assets under management or less can play, a cap that was increased from $750 million in 2016. Unfortunately, only 41 managers met those conditions. The plan’s staff later tried to add more “higher conviction” managers, but that tactic also failed.

In the memo to the plan’s board, Greff and his staff listed reasons for the lackluster results, such the aftermath of the 2008 financial crisis and structural problems, like the restrictions on which managers could be hired.

Once the Ohio emerging-manager platform is gone, staff will find new outside managers to handle the pension portfolio. The seven emerging managers currently in the program—Affinity Investment Advisors, Bowling Portfolio Management, Dean Investment Associates, Decatur Capital Management, Matarin Capital Management, Redwood Investments, and Winslow Asset Management—will remain in place for now while the plan’s staff assesses its next steps,  according to an email from spokesperson Michael Pramik.

Pramik also told CIO the fund will “consider” modifying the program to include asset classes other than equities, but will require “substantial time” to conduct a thorough review.

Big funds such as the $233.9 billion California State Teacher Retirement System (CalSTRS)and Texas’ employees and teacher retirement systems, have enjoyed rewards from their emerging manager programs. Both Texas plans have expanded these undertakings over the past year.

These programs are also not as restrictive with their asset classes or their manager sizes. CalSTRS, for example, allows real estate, global equity, and private equity managers up to $6 billion into its  program.