Stocks and property will be hit hardest if the UK votes to leave the European Union, according to a survey of pension fund investors and stakeholders.

More than half (51%) of 120 pension professionals surveyed by industry networking website Mallowstreet said their pension funds could lose up to 10% in the aftermath of a ‘Brexit’ vote on June 23. A further 5% said they expected a loss of more than 10%, while 32% of those questioned foresaw no impact.

Responding to questions set by CIO, 42% of respondents said UK-listed equities would be the worst-hit asset class on a three-to-five year basis in the event of a ‘leave’ vote.

More than a quarter (27%) said UK property would be most negatively affected. According to Bloomberg, investors in London real estate have lined up post-referendum sales worth an aggregate £1.1 billion ($1.6 billion).

Stuart Breyer, CEO of Mallowstreet, said the results showed an industry “in limbo” as the referendum looms. The long-term impact was “impossible to predict, which is not a comfortable position for trustees and sponsors to be in when making crucial long-term planning decisions around their pension fund’s investment strategy,” Breyer added. 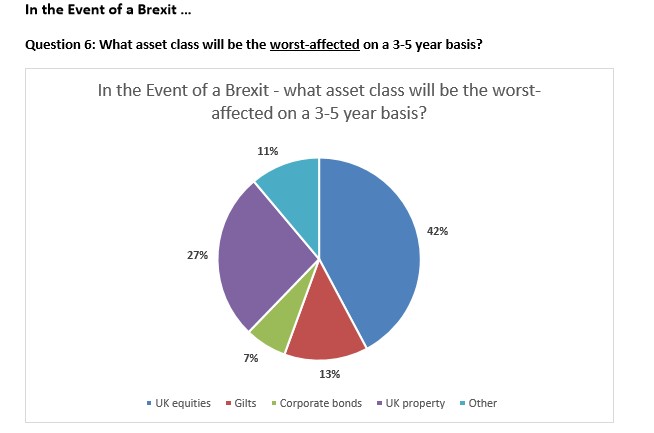 “We did not elicit the reasons why the majority voted for remain, but perhaps the result reflects the concerns that pension schemes may have over their funding levels should a vote to leave the EU be passed,” said Patrick Disney, managing director for SEI’s institutional business.

A similar proportion—79%—of Europe and UK-based hedge funds believe the UK will vote to remain in the EU, according to a poll by Preqin. However, nearly a third of continental hedge fund managers said their industry would benefit from Brexit. Just 17% of UK-based funds agreed, despite some high-profile managers making donations to the ‘leave’ campaign.

According to Oddschecker, which collates betting odds from 26 bookmakers, the odds of a ‘remain’ vote have shortened significantly in the past few days, in the wake of the killing of politician and pro-EU campaigner Jo Cox on June 16.