Clouds and silver linings usually come in pairs and until relatively recently, investors with long time horizons could benefit from both.

The cloud: Basel III and a raft of post-crisis regulation meant banks, the traditional lenders of long-term capital, for the most part shut up their loan shops.

The silver lining: Into the fray stepped sophisticated institutional investors with long-term liabilities who were willing and able to lend to borrowers, eschewing the debt market and produce terms suitable for both.

“Due to capital constraints on banks, they are reluctant to lend more than—or even in some cases up to—10 years, but borrowers are still keen,” says Allen Twyning, investment manager at Pension Insurance Corporation, which was one of the first, and most active, proponents of the strategy. “If borrowers are big, they can issue a corporate bond, but if their financing need is below £150 million, they need alternative sources of funding. This is where institutions like us come in.”

In March, 54% of a group of 240 global institutional investors surveyed by research and data firm Preqin said they had an allocation to private debt. A further 13% said they intended to allocate to the sector either through funds or direct deals. 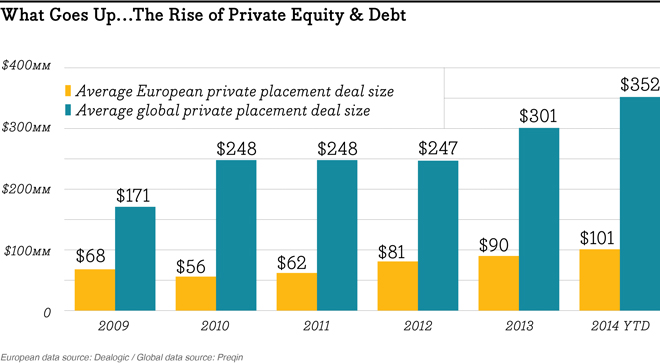 The pick up in appetite has mirrored that of private equity earlier this century, as public markets have failed to sate investors’ return appetite. Also: Debt better fits long-dated liabilities, with a more reliable cash flow.

“The post-crisis appetite of investors for private debt exposure has developed aggressively as traditional fixed interest vehicles struggle to offer the attractive yield or risk profiles as before the credit crisis of 2008,” Preqin said in its research.

Housing associations, student accommodation, and a raft of other loan financing has hit the market since banks pulled out of long-term lending, with funds regularly press-releasing deal notices and direct transactions being announced by the world’s largest investors.

Sadly for fund managers, of the 240 investors surveyed by Preqin, 78% said they preferred direct lending by dealing with companies themselves, with mezzanine debt (61%) and distressed debt funds (59%) the next popular down the scale.

However, the above-mentioned 13%, who are still biding their time, may be too late to the party, warns Twyning. The landscape has already shifted and it is decreasingly a buyer’s market.

“There has been a pick up in issuance—in the housing association sector particularly—and in demand, so it’s becoming quite ‘hot’,” says Twyning.

Preqin said investors expected a median return of between 8% and 14% from their investments in this sector, but Twyning fears they may already have missed out.

“It is sector specific and based on the liquidity spread, but historically it was between 25 to 50 basis points for the illiquidity—now that has been almost completely eroded,” he says. “There have been some transactions where people have overpaid. It’s getting expensive.”

That’s not all. Meagre returns are one thing; rickety terms and conditions are quite another.

“There is more competition on price, but in some cases there has been a loss of credit discipline from our competitors regarding covenants and credit standards,” says Twyning. “Borrowers want flexibility, but that means the lender sometimes has less protection. This means some of the newer debt is riskier than earlier—but that is what happens when there is increased competition.”

For those who remember “covenant-lite” loans of the early and mid-2000s, this might be a frightening prospect. Investors should take care that they don’t forget about previous perceived silver linings—and their disastrous clouds.