The SkyBridge founder and potential US ambassador shares his thoughts on economic problems and how to solve them.

In a keynote fireside chat that combined Wall Street with street smarts at yesterday’s EisnerAmper Alternative Investment Summit, SkyBridge founder emeritus Anthony Scaramucci addressed a wide variety of topics spanning his work ethic, business, and how he fell into his political career.

He told summit attendees at the New York Historical Society his inspirational Cinderella story, in which his father, a coal miner turned sand miner, instilled a “hard work pays off” mentality in Scaramucci and his brother David. Starting in their youth, his sons always worked, then when they got older, they would both graduate from Tufts University, the school their father pushed for. Both found success in the financial world, David in mortgage trading and asset management, and Anthony in hedge funds.

The Mooch talked stories, patriotism, and his SkyBridge career. He also spoke briefly of his possible new job in Paris as the US ambassador to the Organization of Economic Cooperation and Development, but could not divulge details as per the White House’s rules. “It hasn’t been made official yet, so I really can’t say much,” he said. He expects to know the status of his position within six weeks.

However, there were several topics he did address, as there are some grievances he has with DC that he’s hoping the Trump administration can fix. He also addressed issues related to the hedge fund industry, jobs, and retirement, presenting solutions with his signature New York swagger.

Turning from politic to the financial world, when it comes to hedges, Scaramucci feels that asset reflation trade has thrown the industry out of whack. “You have to ask yourself, if it’s a systemic problem, a secular problem, or a cyclical problem. My opinion is that it’s cyclical.” To counteract this, Scaramucci feels that “basis points need to rise to about 350-400 of stimulus.” In order to make it happen, he says federal banks need to give these points on the overnight to cause positive changes for the economy, causing hedges to rise “to keep us in a smoother cycle for a boom and more relaxed bust.”

In short, inflation is the stabilizer.

The job market and pensions, on the other hand, are much trickier — especially on the retirement sector and the recent push for ETFs. “Right now, if we don’t get the lower and middle class engaged in the consumption cycle for the lower economy, then we won’t get the aggregate demand necessary to get 3% growth.  If you don’t get the 3% then you can’t solve entitlement and the whole deal of problems in the US.” Scaramucci also took issue with ETF retirement plans. “You can’t push everybody and their retirement money into ETFs because you’re saying that they’re lower cost instruments. Because what will happen is when there’s the next big crash, everybody’s going to get caught in this thing.”

With the labor force, he opined that society needs to train, educate, and teach people trades, citing his large family of 40 members, and how only he and his brother were the only ones with undergraduate degrees. It didn’t stop the others from making their living as tradesmen. “We have to redesign and rethink culturally about the way we train people and we have to allow people that are older to have self-esteem from their work, irrespective of whether or not they have a four-year college degree,” he said. “If we can start thinking like that and we start growing capital like that in the re-education space, we’re going to have a lot of productive equity.”

Mooch also presented advice on how to fix issues in pensions funding, suggesting we look to see what other countries are doing rather than just proprietary and, in particular, noting Australia’s pension funding model.

“You have to take the best ideas from around the world. I hate the NIH approach (not invented here), so we’re not going to do that,” he told CIO. “I think that the Australians have done a magnificent job of funding their forward-pension liabilities. They’ve set up these super annuity funds, they’ve made it compulsory where corporations have to put in a percentage of their profits into these funds to benefit their worker base. Why can’t we steal that? To me, whether you’re going with a fixed pension or a self-directed, you’re still woefully underfunded. You have to fix the macro mechanisms of funding by forcing compulsory savings. And if you do that, you’ll fix the entire thing. Every American corporation will figure out a way to fund it because there’s a lot of smart men and women in these corporations, and we just have to change the laws.”

He then stressed the issues with this solution. “There’s a whole lobbying community that tells people ‘don’t do that,’” he said. “They give them 25 reasons why, none of which make any sense, and then nothing will get done. And we have to fix that.”

In other matters, Scaramucci is optimistic on Trump’s healthcare reform, but thinks innovative technological advances will be the key to creating a system that exceeds expectations, citing Abundance: The Future is Better Than You Think, by Peter Diamandis’

Although he is in full support of President Trump, there are many things the Mooch does not like about the attitudes of DC folk. In addition to the “demonization” of Wall Street guys, he also doesn’t appreciate how policy makers are too focused on the news. “I also don’t like how we’re in a 24-hour news cycle and a three-minute news hit,” he said. “What Washington policy makers should be thinking about is the next 25 years as opposed to the next 25 minutes.”

Scaramucci said he looks forward to his possible position and feels that it would be a way for him to give back to a world that has given him so much. He thanked President Trump and shared a story of how when on Trump’s campaign trail, he went into the crowd and talked to people who were out of work and hoping Trump would bring jobs back.

“I spent 30 years of my life trying to get into the global elite. I started insulating myself with very wealthy people and I started to miss the economic desolation showing and the anxiety that was going on here as well. Essentially, it took a billionaire that’s living on Fifth Avenue in a tower adjacent to a Tiffany store to show me what was going on in my own neighborhood and I missed it.” 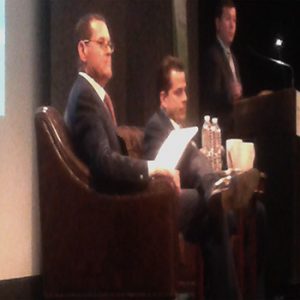