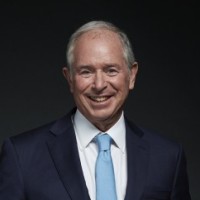 One of Donald Trump’s biggest financial backers, Blackstone Group Chairman Stephen Schwarzman, declared that the Biden administration would take a “softer tone” regarding China, and that he expected less animosity between the two countries.

Schwarzman, who also happens to be an investor in China, has remained a Trump confidante, even though the financier publicly urged the outgoing president to accept Joe Biden’s victory.

On the question of punitive relations with China, though, Schwarzman and Trump really part company. “There is really a very substantial overlap of interest in these countries and the interest of the world,” the private equity chieftain said Tuesday in Hong Kong, according to Reuters. “I expect to see much less tension” during the Biden presidency.

As his time in the White House grew short, Trump added to his blacklist of Chinese companies that are off limits to American investors, Under Trump’s November executive order, investors must unload the securities of 44 Chinese companies allegedly linked to that rival nation’s military. Tech giant Huawei, computer maker Xiaomi, and oil company CNOOC are among those on the roster.

Whether Biden will revoke his Republican predecessor’s order remains to be seen. The Democrat, who takes the oath of office today at noon, also is critical of the Beijing regime. But some observers expect him to ease off Trump’s tariffs and re-engage on a diplomatic level.

Schwarzman headed Trump’s Strategic and Policy Forum, comprised of 16 business leaders. Trump disbanded the panel in 2017 after several of members quit. The Blackstone chair also was involved in trade talks between the US and China, his 2019 autobiography contended.