One of Sweden’s big pension funds hit its highest first half returns since its 2001 inception, but its chief executive officer is unsure newly granted flexibility will allow it to prevail in what it called a “turbulent market.”

AP4’s 13% increase for the six months ended June 30 was a boon, rocketing the plan to $41.68 billion. It also beat its benchmark by 1.7 percentage points.

“This is of course very pleasing,” said Niklas Ekvall, AP4’s CEO. “This may, however, illustrate, above all, the volatile market environment we are now in, and the fact that the evaluation of a pension fund must be made over a long period of time in order to be meaningful.”

Stocks did the most work for the plan, with Swedish and global equities returning 26.3% and 14.5%. Real assets also helped, as they rose 7.1%. Global and Swedish interest rate-related investments returned 4% and 2.5%. Currency and other assets were up 1.1% and 0.1%.

The fund attributed some of its results to new laws that allowed greater investment flexibility for illiquid investments. The rest of its gains, it said, was due to market positivity in the two quarters. The fund also noted worry at the beginning of the year due to rough markets in fourth quarter 2018, but some of those concerns were alleviated in this year’s initial period thanks to trade optimism about US-China relations and the Federal Reserve changing its tune to dovish. AP4 returned 9.1% during that period.

However, this only occurred in the first quarter, as the fund noted that in the second, the markets have “more or less moved sideways with relatively large strokes” depending on how the situation has changed around the catalysts for late 2018 and early 2019’s shifts.

The fund said in its report that these uncertainties still remain, and it expects “a market with sometimes large movements also during the rest of 2019.”

And while the new laws helped, CEO Ekvall was still critical of them. “The proposals presented in the memorandum still entail major limitations with regard to investments in illiquid assets,” he said. “Nor do they provide the AP Funds with similar conditions as other comparable institutional investors.”

Ekvall said the proposal is “not sufficient” for the fund to achieve the law’s goal of better returns with more illiquid access. He instead called for a new regulatory framework “that gives the AP funds sufficient flexibility to be able to operate in a rapidly changing financial market for many years ahead.”

The fund has returned 6.3% per year since inception. 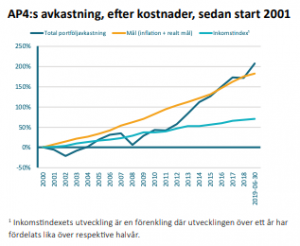 Source: AP4, Translation: AP4’s return, after costs, since inception (top); The development of the income index is a simplification where the development after one year has distributed equally of each half year (bottom). Color codes: dark blue- total portfolio, yellow – target (inflation + real goal), light blue – income index.