Asia saw a $10 billion economic loss in July caused by severe flooding, according to a report from Aon Benfield’s catastrophe model development team.

Seasonal flooding from mid-June continued into July, with the brunt of the impact falling on China. Nearly 200 people were reported dead or missing, while hundreds of thousands of homes were either damaged or destroyed. Most of the damage occurred in the Yangtze River Basin. The Ministry of Civil Affairs totaled the damages at more than $10 billion over a six-week period.

Nearly $1 billion worth of damage was reported in Japan following the landfall of Tropical Storm Nanmadol. More than 2,600 homes and additional structures were either damaged or destroyed by flooding and landslides in Fukuoka, Oita, Shimane, Kumamoto, and Hiroshima prefectures.

India, Bangladesh, and Pakistan suffered hundreds of casualties and damage to structures, agriculture, and infrastructure due to monsoon rains. The total economic damage fell in the hundreds of millions.

Aon Benfield is the global reinsurance intermediary and capital advisor of Aon.

The full chart of current environmental damages in Asia can be viewed below. 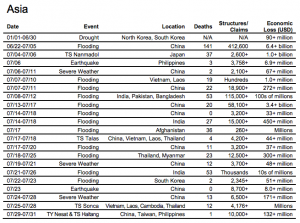