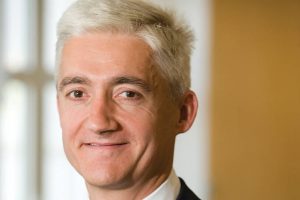 The Universities Superannuation Scheme has found a replacement for Roger Gray, its retiring chief executive and chief investment officer.

Simon Pilcher will become head of the $83 billion British college pension organization’s investment management business in October. Gray, who spent 10 years at the helm of the UK’s largest defined benefit plan, in February announced his retirement, which is slated for September.

Pilcher spent the majority of his 30-plus years in asset management at Prudential, joining a year before it acquired M&G Investments in 1998. He was previously its head of institutional fixed income and chairman of real estate, where he helped expand the program from bonds to areas that include leveraged finance, infrastructure, and mortgage lending. Before that, he spent more than 10 years at Morgan Grenfell.

M&G Prudential is currently doing a de-merger as it looks to spin off the business. It recently hired a slew of new directors ahead of the plans. As part of the structural changes, Pilcher left his post in March. He was succeeded by Jack Daniels, its new CIO.

Bill Galvin, the superannuation group’s CEO, said Pilcher comes with high-level leadership and “a firm emphasis on building a strong culture of inclusion as well as a focus on innovation.”

At the fund, Pilcher will run a 140-person team and inherit a portfolio in the midst of making similar moves to what he experienced at Prudential. This includes shifting its traditional stocks and bonds asset mix to include alternatives and internalizing more of its investments.

Gray, Pilcher, and Galvin could not be reached for comment.

« CalPERS Private Equity Co-Investment Plan Could Be Announced Next Month