US single premium pension buy-out product sales rose to $4.1 billion in the second quarter of 2017, up from $1.42 billion in the previous quarter, and more than three times higher than the $1.08 billion reported during the same period last year, according to LIMRA Secure Retirement Institute’s quarterly US Group Annuity Risk Transfer Survey.

Pension buy-outs include group annuity risk transfers, which allow an employer to transfer part or all of its pension liabilities to an insurer, thus removing the liability from its balance sheet. Companies that have recently performed pension risk transfers include Ball Corp., Tata Steel, NCR, The Hartford, and Accenture.

It also said that recent research finds that despite the rising stock market, eight in 10 defined benefit pension plans still have a funding status of less than 90%, “reflecting years of very low interest rates and under-funding.” Regardless of funding level, about 40% of plan sponsors say they are very interested in pension risk transfers, and more than 80% say they are at least somewhat interested in the products, said LIMRA.

“Throughout the past decade, it has become increasingly difficult for employers to offer a defined benefit pension plan. Low interest rates, stock market volatility, increased longevity, and rising Pension Benefit Guarantee Corporation premiums have become major obstacles for these plan sponsors to overcome,” said Noble. “In response to these events, many employers have chosen to freeze their DB plan and investigate the possibility of purchasing a pension buy-out product.” 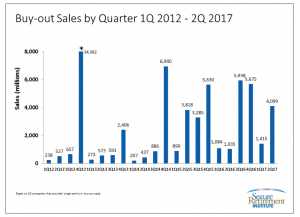