US and UK corporate pension deficits are moving in opposite directions as American funds increased their liabilities in March, while British funds have shed theirs so far this year, according to consulting firm Mercer.

During the month, the S&P 500 index decreased 2.7%, and the MSCI EAFE index, which tracks the equity market performance of developed markets outside of the US and Canada, decreased 2.2%. Meanwhile, typical discount rates for pension plans as measured by the Mercer Yield Curve decreased by 5 basis points to 3.92%.

“March snapped a streak of funded status gains dating back to August 2017,” said Matt McDaniel, a partner at Mercer. “During this period, interest rates and equity valuations have both risen markedly. Plan sponsors should look to see if their pension policies are aligned for current market conditions.”

Mercer estimates the aggregate funded status position of plans sponsored by S&P 1500 companies based on each company’s latest available year-end statement, and by projections to March 31 in line with financial indices. The estimates include US domestic qualified and non-qualified plans, along with all non-domestic plans.

“While the drop in funded status for March was small,” said McDaniel, “history has shown us it is a question of ‘when’—not ‘if’—  funded status volatility will return.” 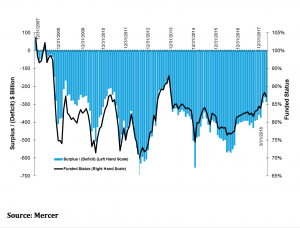 While the pension deficits rise in the US, the story is different on the other side of the Atlantic, as Mercer also reported that the deficit of defined benefit pensions for the UK’s 350 largest listed companies declined sharply during the first three months of the year, falling by £4 billion to £72 billion ($101.5 billion).

The continued drop in accounting deficit was attributed to a reduction of pension liabilities, as a result of rising corporate bond yields, which has outpaced a drop in asset valuations. Liabilities have fallen £19 billion to £838 billion, while asset valuations have lost £15 billion to £766 billion in the first quarter of 2018.

“The quarter saw very significant asset and liability swings, with recent declining asset valuations creating cause for concern,” Le Roy van Zyl, a partner at Mercer, said in a release. “In response, we continue to see schemes opting for strategies that protect themselves from the most adverse outcomes, whilst retaining some upside potential.”

Mercer said its data relates to about 50% of all UK pension scheme liabilities and analyses pension deficits calculated using the same approach companies have to use for their corporate accounts. The data underlying the survey is refreshed as companies report their year-end accounts.

“The continuing decline of asset valuations serves as an important reminder of the very real risks facing pension schemes,” said Alan Baker, chair of Mercer’s defined benefit policy group. “Trustees and sponsors must actively monitor and mitigate the risks they’re running, to ensure their exposure is in line with their risk appetite.”