Carrie Thome had been an 18-year chief with the $2.7 billion organization, according to her LinkedIn profile, which has not yet been updated. The foundation recently removed her from its website.

“Carrie’s transition is a personnel matter for WARF, and is personal to Carrie, so we will not comment on it further,” Jeanan Yasiri Moe, the foundation’s director of strategic communications, told CIO.

Deputy CIO Alain Hung is fulfilling her responsibilities in the interim.

“WARF’s managing director and our board of trustees will be considering next steps in the months to come,” Moe said.

Thome’s portfolio, which covers the University of Wisconsin–Madison’s scientific research, returned 4.96% in the fiscal year ended June 30, 2018; outperforming its 4.33% benchmark (the most recent information available).

The organization ranked as one of the top-performing foundations in the country over the 10-year period, according to the Northern Trust’s peer group of endowments and foundations. 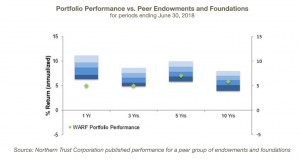