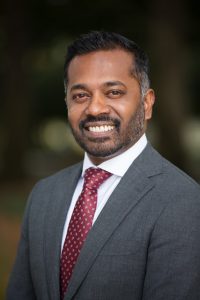 That means he’ll get the chance to build the fund’s portfolio and investment division from scratch, which the new CIO is eager to do. “I want to come into work every day and know I’m making a difference,” he said.

Muthiah spent two years as a managing director with the $7 billion Atlanta-based college endowment, running a portfolio of similar size to Group Health’s. The Group Health Foundation was founded in 2015 and funded in 2017 by proceeds from Kaiser Permanente’s acquisition of Group Health Cooperative.

At the Seattle-based foundation Muthiah brings a wealth of living experience from all over the world.  Muthiah has lived in four different countries (India, Papua New Guinea, Australia, and the US) and will now be working in his sixth state (his other former areas of residence include California, Texas, Virginia, Florida, and Georgia) when he moves to Washington.

Muthiah, who starts at the 18-month-old foundation next month, says his globe-trotting past furnishes him with a cultural awareness and a global perspective that will come in handy when assessing international opportunity.

“We’re living in a global and interconnected world, and things happening across the globe have very real effects on what’s happening here in today’s market,” he said, adding that the foundation staff is an ethnically diverse bunch, and this was a big driver for his career move.

He’s also looking forward to meeting the people and organizations in communities across Washington.

Muthiah is an admirer of  Charlie Munger, Warren Buffett’s right-hand man, whose broad reading and deep thinking aids his investment analysis. The new Group Health Foundation chief enjoys reading and watching Tamil movies, also known as Kollywood films (after the Tamil state in southern India, and not to be confused with Bollywood). He also likes cycling and jogging, and wants to start hiking and camping when he moves to the state that includes Mt. Rainier.

Neither Group Health Foundation representatives nor Srinivas Pulavarti, Emory’s CIO and Muthiah’s old boss, could be reached for comment.

« Sunsuper CEO Will Step Down Once Successor Is Found