Home > News > Risk > Bubble, Bubble: How Bad Will the Bull Market’s Demise Be? 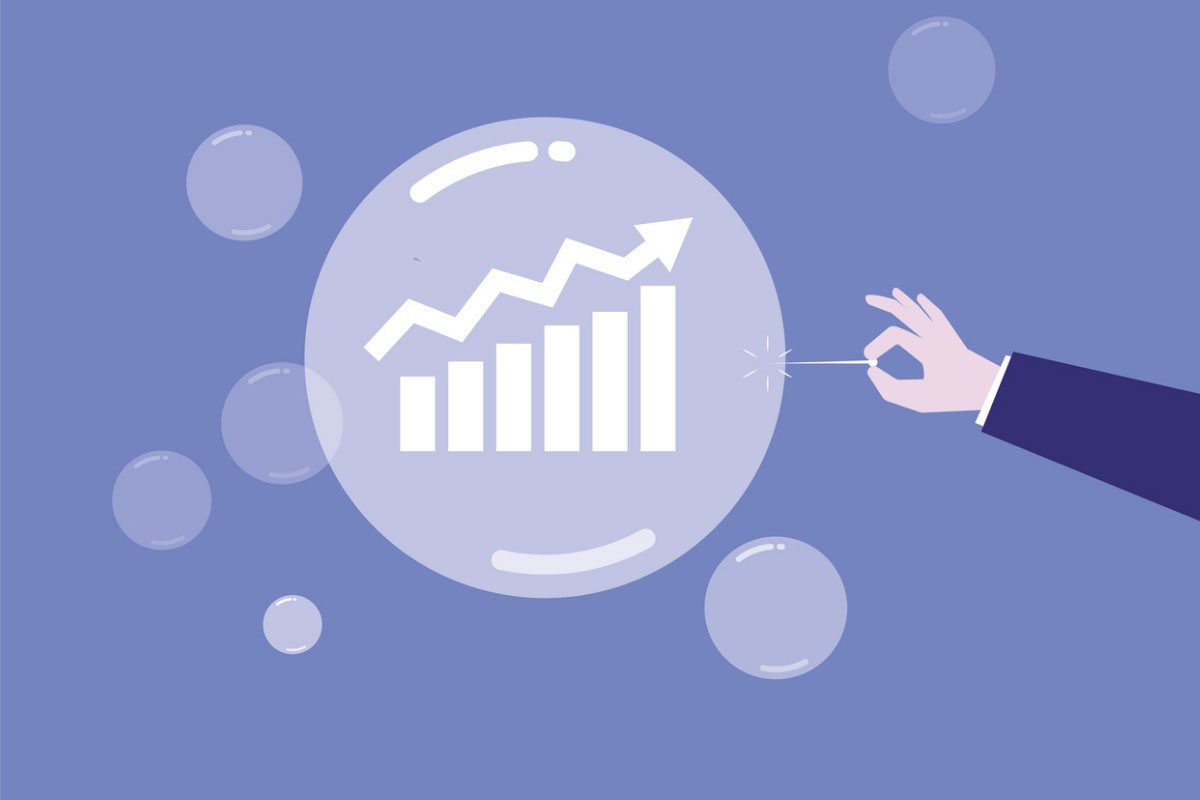 So, the rally has to end sometime, right? There’s always a catalyst, and the past two days’ drops suggest it might be climbing inflation. And, after all, we’ve been hearing for some time that the market is in a bubble, which makes the situation particularly precarious.

Ultimately, the likes of Nvidia and other tech names have done well of late. And the so-called Shiller P/E Ratio is at a very lofty level. This version of the price/earnings multiple, or P/E, is at a level that surpasses the run-up to the 1929 crash and is nearing the record set right before the 2000 dot-com implosion.

Richard Bernstein Associates in June listed five indications of a market bubble, which kind of matches up with the current stock market: massive liquidity, expanding leverage, more amateurs involved in stocks, an explosion of initial public offerings (IPOs), and increasing trading. The firm’s report is as relevant as ever. “The entire market doesn’t necessarily seem at risk, but momentum strategies focused on the market’s bubble leadership seem very risky to us,” the firm’s research note warned.

Sure, people have been saying we’re in a bubble for a while now. But wouldn’t it have been lovely to have gotten out of the market or, at least, the tech end of it, right before the March 2000 end of the dot-com euphoria? If such a prescient investor shifted money to small-caps, energy, or financial stocks, the ensuing bear market wouldn’t have been too bad.

Bernstein’s five horsemen of the market apocalypse do—let’s face it—have an eerie air of familiarity about them:

Liquidity. Thanks to the Federal Reserve, with help from the Trump and Biden administrations, the money supply (aka M2) has expanded enormously. To offset the degradations of the pandemic, M2 has grown 35% since January 2020. A lot of it, though, wasn’t deployed as bank lending. The upshot, as Bernstein’s paper points out, has been a ballooning of stocks. As the study puts the matter: “The Fed’s stimulus has increasingly been trapped within the financial markets and fueled speculation rather than healthy economic activity.”

Leverage. Margin lending has been on the upswing. According to a MagnifyMoney survey the report cites, 40% of individual investors overall, including 80% of Gen Z investors, and 60% of Millennials, had borrowed to play the market.

Amateurs. In Bernstein’s view, “Despite the associated noble intentions, every financial bubble includes a democratization of the market: ‘Everyone should get to play.’” The paper notes the proliferation of individual investor chat boards, enlarged trading platforms, and meme stocks suggest “the current speculative fervor includes everyone.”

IPOs. Stock-buying fads help bring down the cost of capital—and low, low interest rates have aided that. Not all of these new issues are great, if the barriers to entry are lowered. Bernstein zeroes in on the increase is special purpose acquisition companies (SPACs), which are easy ways to go public with less regulatory scrutiny.

Trading. The zest of meme stock traders harkens back to earlier eras. The Bernstein report recounts how “day traders boosted trading volume during the Technology Bubble and flipping condos spurred turnover during the Housing Bubble.”

If a bright side exists, Bernstein concludes, it’s that just three sectors in the current market have been in bubble territory—technology, communication services, and consumer discretionary—leaving other areas with less distance to fall.

A New Tech Bubble Is Poised to Pop, Warns Bernstein

You Can’t Spot a Bubble, So Don’t Even Try, Says Eugene Fama