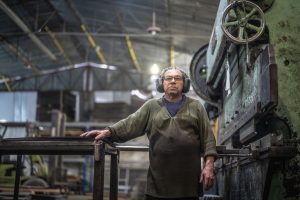 Improved pay is the top priority of Americans in finding means to make companies create a better economy that benefits more people, according to a poll by Just Capital, a group funded by hedge fund honcho Paul Tudor Jones.

In the poll, paying a “fair” or “living” wage was the choice in 12.2% of the respondents. Wages growth has nosed up recently, but still lags way behind where it would’ve been if earlier eras’ norms for raises had been in effect. The General Motors strike centers on restoring such lost income.

Just Capital asked more than 96,000 Americans what companies can do, as it said in a statement, to “restore declining trust and create an economy that works for more Americans.” The biggest poll finding was that companies must “invest” in their workers.

Treating customers and communities well—which is described as “stakeholders” —placed second and third. Helping the environment was fourth, and “serving shareholders through good governance” was fifth. Note that the shareholders part is attached to the idealistic goal of better governance, something dear to the heart of corporate activists. (Just surveys also make clear that the public also cares about the more traditional capitalist objective of making a profit.)

The poll findings mirror a recent statement from the Business Roundtable, comprised of chief executives from the largest US companies, that the purpose of a corporation no longer should be confined to advancing the interests of its shareholders alone. Instead, the group declared, it must deal ethically with others, boost employees’ lots, and protect the environment.

Billionaire Jones formed Just Capital to promote this notion. In addition to its surveys, the organization sponsors an exchange-traded fund that invests in companies it considers to be “just.” Jones also is the founder of the Robin Hood Foundation, an anti-poverty charity.

Paul Tudor Jones: What to Do When the Fed Cuts Rates

Paul Tudor Jones Says Stocks Will Be Boffo, but then … Look Out Below