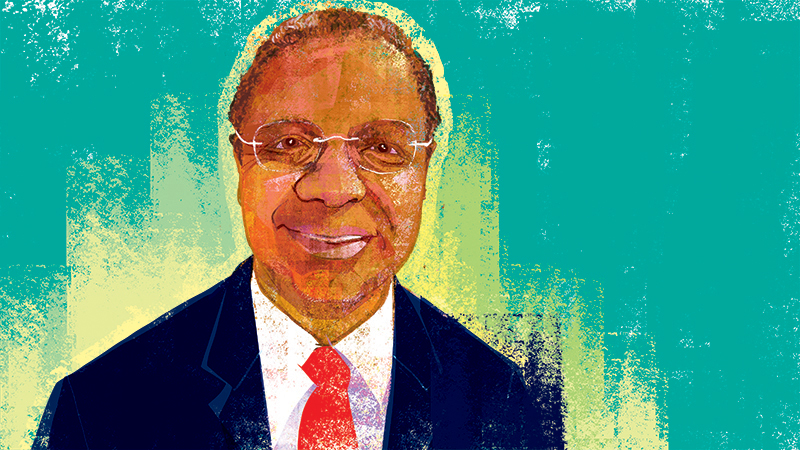 Editor’s Note: Mansco Perry III is one of the stellar CIOs who will be featured on our upcoming Power 100 list, to be released this month.

Mansco Perry III is always working out a problem in his head. For years, the investment chief at the Minnesota State Board of Investment thought about what his team would do in the event of another downturn like the 2008 financial crisis. By the time the equity markets took a nosedive in March, he had a strategy in mind to talk over with his investment staff and his trustees, mainly to increase liquidity to safeguard the portfolio.

Those ruminations paid off for the CIO. The $105 billion Minnesota State Retirement System has yet to disclose its returns for the year, but the gains are expected to be in the double digits. Yet the investment chief is holding on to his cash. He’s expecting more market volatility in the year ahead, even if it is not as pronounced as it was in March. What’s key, Perry says, is never to sell assets on the low to meet the fund’s benefit payments or private market commitments.

“What you want to do is have a portfolio that is going to give you the capabilities of rebounding,” he said.

It’s an episode that perhaps perfectly encapsulates the gifts of one of the most highly regarded CIOs in the business. Foresight. Quickness. A level head. Under Perry’s leadership, the state pension system has returned top quartile performance year after year. Among his peers, Perry is so respected by his fellow allocators that he served as the chair for the National Association of State Investment Officers, a group of 70 CIOs from the nation’s largest public pension funds, for many years.

“I have always admired his ability to maintain a sense of calm under stressful circumstances. That coolness under pressure and having the same kind of common sense as his predecessor no doubt helped him to be highly successful as an investor,” wrote South Dakota Investment Council (SDIC) CIO Matt Clark in an email. (Clark has known Perry for more than two decades, both having worked under iconic CIOs—Perry under Howard Bicker and Clark under Steve Myers.)

“I have no doubt Mansco belongs in the hypothetical CIO hall of fame with his old boss,” Clark said.

Perry has spent the better part of his career in the Midwest, but the allocator is originally from Newark, New Jersey. His lifelong support of the New York Yankees is perhaps one of only two major flaws his predecessor and mentor, Bicker, will admit to his protégé as having; the other is his golf game. (Bicker is a supporter of the Minnesota Twins).

“He is a leader in a lot of the various issues that come up for state fund officials,” Bicker said. “And he is just a good person and he’ll tell you exactly what he thinks. He doesn’t beat around the bush.”

Perry has a curious mind. He knows a lot of trivia about baseball, but he also seems to know so much other trivia about, well, everything. At several points during our conversation, he asked questions, particularly related to his love of the history of US currency: Did you know that people used to carry $10,000 bills? (Apparently larger bills were banned to make it more difficult for drug traffickers to launder money.) Or, you may know there is a nickel, but have you ever heard of the half dime? (It’s lighter and smaller than both the 5-cent and 10-cent pieces we know.)

In 1990, Perry’s intelligence was clear to his interviewers, including Bicker, who first hired him at the Minnesota fund. Up till then, Perry had several stints with private and public employers in Minnesota. After graduating from Carleton College in 1974, and then getting his finance and accounting master’s degree from the University of Chicago Booth School of Business, he went to work as a financial analyst at Cargill, and then as a senior control analyst at the Dayton Hudson Corporation, the company later as Target.

Eventually, he switched over to spend a half-year at the Federal Reserve Bank of Minneapolis, then worked as a director of planning and analysis at the Minnesota Department of Revenue, where he expressed interest in working at the state investment agency. A colleague set up an interview. He was hired as the assistant executive director, where he stayed for 17 years.

He followed that with successive allocator roles. He spent almost three years as CIO at the Maryland State Retirement Agency, and then another three years at the Macalester College endowment, so that by the time he returned to Minnesota as CIO, following Bicker’s exit, Perry had a wealth of experience.

Over the years, Perry distilled the lessons from his breadth of his experience into an investment policy: Don’t underestimate the importance of doing nothing. He said allocators can easily fall into the trap of constantly tinkering with their investment portfolios, which often benefit most when they’re left alone to appreciate.

“I’m not saying that you don’t look at markets or you don’t try and understand what new things are,” Perry said. “But what I am saying is that, be highly selective in what you do and recognize that sticking to the basics isn’t the bad thing.”

Sticking to the Basics

And the investment chief has kept to basics. While Perry has made several changes to his portfolio allocation, the majority (50%) remains in stocks. And the majority of stocks remain in passive investments. The passive tilt is on purpose. Perry said the portfolio has gotten returns just as good from its index managers as it has from its active managers. The one exception is a currency manager the fund has recently hired to oversee its non-US equities.

Within its fixed income portfolio, the investment chief has brought the allocation up to 25% in the past year, from a 22% core plus bond portfolio, to provide the fund with more liquidity to pay its obligations.

The pension system has a final 25% allocation to private markets. But in the past several years, Perry says, the fund has not met the total 25% allocation, typically sticking to about a 15% true allocation to private markets. This is mainly because managers have not drawn down commitments as quickly as the fund has been generating returns on active investments. Instead, Perry puts the remaining 10% allocation into stocks that support private market vehicles. Part of that is in physical stocks. Another part is in a futures overlay the pension fund has hired a manager to oversee.

The result is a pension fund that is flexible and able to ride out any volatility in the markets.

“Most people would say, you know, my job is to make as much money as possible,” Perry said. “And I say, ‘No, we’re running a pension fund, our job is to make money so that we can satisfy our pension obligations,’ which means making payments and making more so that in the future we can pay off all the obligations.”

While it seems the retirement system has made it past 2020’s issues, Perry is still deliberating many questions in his head. Right now, he’s concerned about the recovery from the pandemic, and how the impact on the markets and the economy will eventually affect his pension fund.

How will the changes to a whole year of education affect students and their future employers? If more active workers voluntarily leave the workforce, will there be enough new workers to replace them? If the markets continue their climb to extraordinary heights, he imagines that can only serve to help investment returns, an advantage for pension beneficiaries. But if the active members of his fund continue to lose jobs, or never recover the jobs they once had, he worries that it will be more difficult for plan sponsors to make contributions in the future. It’s a concern that many in the allocator space have.

“These are questions that I don’t think there are going to be easy answers to,” he said. “Yet you can’t ignore them.”

« Not So Junky: Speculative Bond Yields Near 4%