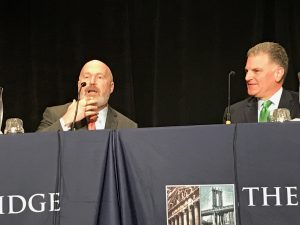 A storied hedge fund manager and a large pension program chieftain have some tales from the front for you.

Michael Trotsky has been running the Massachusetts Pension Reserves Investment Management Board for almost a decade, but admitted Tuesday that there was a steep learning curve when he made the transition to the public from the private sector.

In an appearance at the Pension Bridge conference in San Francisco, alongside AQR founder Cliff Asness, the $74 billion fund’s executive director (also its chief investment officer), admitted he was originally lacking in a few areas.

“I had spent most of my time managing equities in some form or fashion, so I needed to broaden my experience set to other asset classes,” he said. “That was number one.”

He came from Boston-based hedge fund PAR Capital Management to the pension organization, which houses the assets of both the Massachusetts Teachers’ and State Employees’ Retirement Systems as well as 100 participating municipal and county retirement systems. And the transition to the political world was jarring.

“I am not a political person, and I wound up managing a state pension plan with some elected officials who really look over my shoulder, sometimes uncomfortably so,” he said. Trotsky said learning how to negotiate and say “no” to very important people who had some control over his career (and the inevitable pressure he would and does face) was “probably the hardest single job of my life.”

Trotsky said that element of his job is made “a lot easier” with the help of his trustees and a balanced board that “really cares about things,” although he admittedly was “very green on that whole scale.”

“Most of us in this room have really spent our careers on the business side of things,” said Trotsky. “Let me tell you, the political side of things is another world.”

Also new to him as the Mass PRIM chief was managing a large team. “I managed small groups of people but never a large organization,” he said. “I actually needed to learn it…and it’s something I think I’m really good at, and I really enjoy.”

“I do not enjoy managing people, and they do not enjoy being managed by me,” Asness deadpanned. “It goes well.”

Following chuckles, the hedge man then got serious.

“Some of my best learning experiences… is when I’ve been on those investment committees,” he said. “Any money manager who has the chance to do that should, because as a money manager, you’re always like, ’why does the client think this’ or ‘we’ve had six good years and one bad one [and now] they’re yelling at me.’ And then you’re the person doing it, and you feel perfectly reasonable doing it.”

Asness warned that not all experiences will be good ones when it comes to committees, and shared a story about a rough one. At an endowment he was with about a year before the financial crisis, the committee wanted to add more stocks but felt the market was overvalued. The institution then said if a crash came it could “back up the truck,” meaning take a bullish position, according to Asness.

“Can anyone here take a guess what gear the truck was thrown into?” he asked the Pension Bridge crowd.

Asness then said the general committee structure is “very dangerous” as there is a lot of group think, panic, and “realization that they get the downside before they get the upside, so they’re not even being irrational.”

Trotsky jumped in to say a key advantage of his organization over his peers is a reasonable board. The CIO said he has experienced two “great surprises” in his time at the fund. The first is being at an organization that is able to attract great talent regularly. The second, and “greatest” surprise, is that Trotsky has never been forced to hire or fire a person or a firm.

“I’ve been doing this job for eight years,” he said. “I can’t really believe it, but it’s been a ton of fun and I’ve learned so much.”