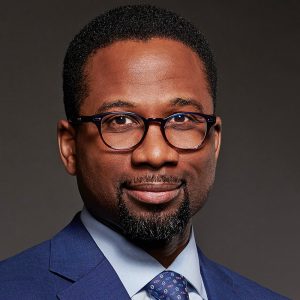 Shundrawn Thomas, president of Northern Trust Asset Management, an investment management firm with $1.1 trillion in assets under management (AUM), has been actively calling for diversity and compassion among asset managers, as well as institutional investors.

As part of his efforts, he has been publishing letters on LinkedIn. In the earliest stage of the pandemic, Thomas penned an open letter to business and civic leaders issuing an urgent call for more compassionate leadership. In particular, he emphasized the unequal toll exacted on marginalized communities and the responsibility of leaders to respond in word and deed.

In this series (taken from an edited interview with CIO managing editor Christine Giordano), Thomas will outline what he’s been up to, lay out a path for the years to come, and explore how he hopes to add diversity to the finance community, as well as other areas of society.

Christine Giordano: Beginning last May, you wrote three open letters to corporate and civic leaders. You titled the first, “The Cure to COVID-19 Begins with Compassion.”

And you were early as a corporate leader in calling attention to the fact that the elderly, the poor, the infirm, and the ethnically diverse populations were suffering the greatest losses, most tragically in lives lost. What inspired you to write the letter?

Shundrawn Thomas: I think it starts, first and foremost, with how we all experienced these things personally, so I would say at the time (late April was when I was writing this letter), there were growing ranks of my family, friends, colleagues, different communities— like my faith community—that were all being impacted in pretty significant ways. Some tragically, with the passing of individuals, suddenly.

And if you think about the challenge in that particular time, it largely centered on how quickly things really pivoted. We had two deaths in the family, but you couldn’t even grieve in the same way because we were socially distanced, we couldn’t come together and have a traditional funeral burial.

If I think about it, in the crucible of this crisis, you still have to do your job and lead. And one of the things that was really pressing on me was the nature of the dialogue at that particular point in time. The best way I can describe it is there was a lot of head, but less heart.

Some of the things that you would hear, you may recall, there was a dialogue that this was a trade-off between lives and livelihoods. But to my way of thinking, that was a false dichotomy. Because the reality is, we had to really think about both. People were being impacted in both ways.

It was interesting to hear how much talk there was about the economic part of it, when, at its core, it was truly a health and humanitarian crisis.

And so to me, there seemed to be a void of leaders speaking into the heart of the true issue. And in our capacity to lead, yes, [we needed to be] talking about very relevant things from the standpoint of business or the economy, but while also understanding that we have to speak to the head and the heart.

The other part that I would say, tying back to my personal experience, is this laid bare gross inequities in our society that lay in plain sight. And now we were seeing these things being magnified by how the most vulnerable were experiencing this pandemic.

But early on, you just didn’t, to me, hear enough or see enough in terms of action addressing that. And I feel that my role as a business and civic leader is a privilege, not an entitlement. And so I considered how I could encourage other business and civic leaders, understanding that there were others who were thinking similarly to how I was thinking.

CG: So when you called for compassion, what kind of action were you seeking? What was your grand vision?

ST: The very first thing that I was really encouraging and calling for was for us to simply pause and think about how we need to evolve or change the nature of our dialogue. And to really encourage us to lean more into a dialogue of empathy.

We needed to really strongly consider and think about how we change the nature of the dialogue. And how do we, among other things, express empathy in our engagement with those around us?

The second thing, in terms of the dialogue, is to change the nature of the discourse, especially as leaders at a time when we’re experiencing crisis. For us to have negative, volatile, and conflicting discourse actually flies in the face of what we need to be doing. That’s when I think leaders should be really standing up and bringing people together. And so that was another component of it.

But then I go from the nature of the dialogue to action and sometimes when you’re facing something that’s complex or big, people tend to opt for the most complex or complicated solutions. But part of what I was encouraging was to focus on the immediate things that we could do for people that were touching us in our connected communities.

I’ll give a simple example: A lot of the small businesses in our communities were closing. Take service providers—my barber, or my wife’s hairstylist—even though we couldn’t go and take advantage of these services, my wife and I would still send checks or payments to them.

It was just a small act of compassion, but the point was there were things that were within all of our grasp, or reach, that we could do to help and encourage people in this environment, as opposed to just sitting still.

ST: My point was not to say that it did not exist. But rather to point out that we were not seeing it in enough measure.

Now, to be frank, I’m not suggesting that it was just unique to that period, although it was certainly a period where we needed it more. But if we look at the arc of time, I would say that’s one of the things that I think we need to really wrestle with, if we’re honest and we look at various aspects of society, including our political discourse. I mean turn on the TV.

I think that the nature of our discourse affects our ability, particularly in the areas of greatest divide, to engage with people in a way that’s open and that expresses understanding. And empathy: It seems that that has diminished over time. And so we were in a period where we needed to do even more, but sometimes when periods of crisis come, they shine a light on areas that we really need to work on.

Frankly, there’s a trend that we’ve seen in a lot of aspects of society where that’s been diminished, and, hopefully, this would be a moment where, particularly as leaders, we would meet the task at hand.

If you think about the business of investment management, it’s a business where you have a lot of intellectual people. And it’s easy to set aside in a sense, for lack of better terms, that “people aspect” of it.

But this is still about people, right? Even if we want to help people in terms of their investment outcomes, we have to understand that those investment goals fit in the context of life goals. That they have real aspirations, they have real dreams. And in our current environment, those things are threatened, whether it’s people’s dreams about their retirement or their health or putting their children to school. And just the simple ability to actually acknowledge that—to tie that to what we do and why we do it—that in and of itself is also an act of empathy. And I think that’s something that we in asset management should expect of ourselves.

CG: This year, of course, we’ve had a demand for more empathy. Some say that the whole gamification of GameStop or the uprising [at the Capitol] could be due to a lack of compassion, a lack of empathy for those on the bottom end of the K-shaped recovery. Can you think of some solid examples of things people in asset management might do to change that?

ST: If I really care about somebody, I share what I have and what I know. So we at Northern Trust Asset Management support organizations like Girls Who Invest or the Robert Toigo Foundation that help underrepresented groups get access to the business that we’re in.

We can contribute our time and the investment knowledge that we have to help others, because we know if people start investing earlier in their lives, they’re going to have much better success in a lot of different areas. If we simply hoard what we know, and we only use it for our own good, we’ve actually limited the impact that we can have on society.

We have to look at success beyond just the returns on an investment portfolio that we manage or a product that we oversee and distribute. We can magnify that impact. We can contribute to the betterment of society more broadly: people’s understanding of investments and their propensity and willingness to invest. We can affect that.

CG: After shining light on economic inequities, you then further addressed them, as well as systemic racism, in two letters precipitated by the killings of Breonna Taylor, George Floyd, and Ahmaud Arbery, and the shooting of Jacob Blake. You shared for the first time very personal feelings, including blatant racism you’ve experienced. What compelled you to do so?

ST: I shared in one of the letters openly that as an African American, dealing with incidents of racism or dealing with racist ideas is my unfortunate reality. It’s not exceptional. It’s unremarkable. And it’s such a common part of my experience, I have to be able to constructively deal with it.

The first thing I said in the first letter, “Breaking the Silence,” is that, frankly, because of how challenging it is to even address these issues, particularly in, say, the workplace, that what I realize is there is a significant cost to that silence on all sides.

Because I have a platform, I believe that, if I honestly and transparently share my experience, it will give a real voice to the pain. Many people from similar backgrounds are suffering silently.

The other thing that’s just as important, Christine, is that there are people, in fact I believe the majority of individuals, who really care about the issue, but they don’t know how to engage with it. And they feel sort of inadequate and so there’s this deafening silence. So how do I potentially make it safe or comfortable for people to engage?

Racism has plagued us for so many centuries. To rid communities of it, you have to improve the nature of the dialogue.

I have a responsibility, and, in some ways, a burden, of being connected to multiple communities, and so if it’s hopefully done effectively, people can hear my heart. I have the capacity to connect those communities.

How to Prevent a K-Shaped Recovery

« Single-Employer Plans Can Lower Target Returns to 4% and 5%