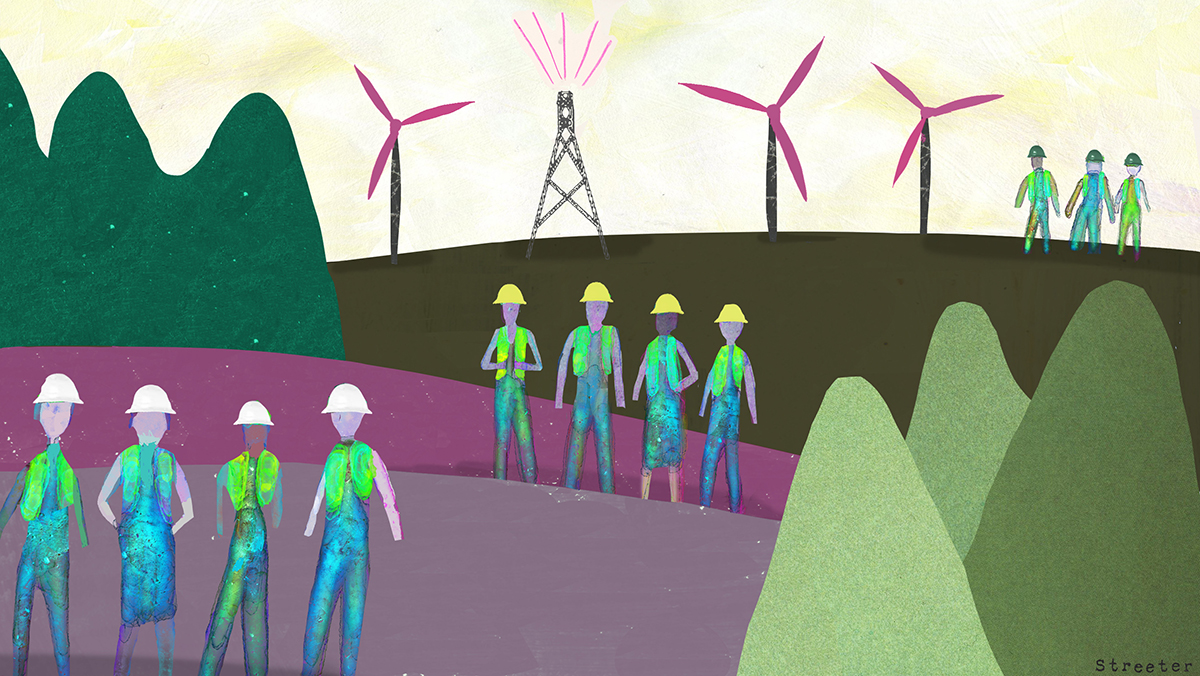 Amid a rush of institutional investments, renewable energy seems to have a bright future. And President Joe Biden is committed, one way or another, to create what he calls “good quality jobs” in green energy. Available evidence suggests that plenty of these jobs will come to fruition. But, at the same time, declining oil and gas industry work will not go up in smoke.

That’s because, while renewables such as solar and wind energy have good prospects, traditional carbon-based energy providers are viewed as necessary to bridge the gap to a total clean energy future, which likely will take longer than many environmentalists hope. Fossil fuels make up 60% of US electricity generation, and nuclear plants contribute another 20%, according to the US Energy Information Administration (EIA). Yes, the renewable choices appear to be gaining, and fossil fuels and nuclear power are projected to fall behind as a share of power output, at least under many scenarios. That said, plenty of jobs in oil and gas will remain, albeit not as many as now.

EIA forecasts show natural gas use in power generation will continue to ascend by 2050, although renewables will be ahead—levels will near 2 trillion kilowatts hours for gas and 2.5 trillion for renewables by then. Reason: Demand for natural gas probably will survive, as renewables won’t be ready to take all the reins.

Oil use in transportation is expected to be flat from now until 2050. Still, said Raoul LeBlanc, a vice president at research firm IHS Markit, it will take decades for the vast fleets of petroleum-powered aircraft, automobiles, and trucks to be replaced by electric vehicles (EVs) or other non-carbon-oriented propulsion systems.

Traditional energy, a boom and bust world that has seen progressively more busts in recent years, is no place for secure employment. Oil prices skidded at the onset of the pandemic in 2020, which prompted the fastest layoffs in the US oil and gas industry’s history. Although prices have sprung back and even gone higher than before, only about 50% of the lost jobs have returned, a Deloitte report concludes. The cyclical hiring and shedding of employees—plus the industry’s aging workforce—is reducing legacy energy providers’ talent pool, the study says. US oil and gas production jobs hit a low this February and then started to add some back, reaching a total of 652,000 positions in October. That is nowhere near the 780,000 level in pre-coronavirus 2019.

If any traditional energy jobs will zero out, they are likely in the coal mining segment, which is shrinking as the result of decreased demand for this most dirty fuel. Coal mining has seen a steeper decline in jobs than oil and gas, as public utilities switch to natural gas. There are currently about 42,500 coal jobs, down by 4,000 from pre-pandemic, and half the count of 10 years ago. Protests that good-paying coal jobs should be allowed to come back ring hollow with Elizabeth Levy, a portfolio manager at Trillium Asset Management, as they now are a tiny fraction of the nation’s labor force. “It’s less than the population of Cedar Rapids, Iowa,” she observed.

Renewables’ employment got hurt in the 2020 economic downturn, as well. An estimated 3 million Americans now work in clean energy, down by about a tenth from last year. But a recovery is underway, with more robust growth forecast for later on. The US Department of Energy found small boosts as of mid-year, with a 1% increase in battery storage jobs, a 6% rise in hybrid electric vehicle positions, and a 2% increase in wind generation positions. These jobs are projected to keep growing, up 8% over the next 10 years, which is as fast as the expected average U.S. job growth rate.

The category totals aren’t strictly comparable for legacy companies and renewable energy, because employment in solar, wind, and the like is spread over a lot of areas and requires more assembly than fossil fuel rigs. While extraction, transportation, and refining of fossil fuel products are concentrated, renewable work encompasses a vast array of fields, including roof installations of solar panels and production of wind turbine blades.

One advantage of solar and wind is that, unlike fossil fuels, they won’t at some point be exhausted, noted Shawn Reynolds, portfolio manager for VanEck’s global resources and environmental sustainability strategies. “Wind and solar farms can be replaced” if they wear out, he said.

A lot of money is expected to be invested in renewables, buoying their future as job growers. The International Energy Agency (IEA) reports that renewables are expected to dominate 2021 energy investments, making up about 70% of the $530 billion countries spend on new power. Wind turbine service technicians and solar photovoltaic installers top the list of fast-growing jobs as more companies and homeowners eye renewable electricity sources, IEA says.

Certainly, oil and gas companies also are spending millions in exploration and added capacity. Liquified natural gas terminals are being built worldwide to transport the stuff to nations with none of their own deposits. Tellingly, though, parts of the traditional energy industry are starting their own initiatives to get into renewables. Oil-and-gas service companies Halliburton and Baker Hughes have set up research centers to accelerate renewable technology development. BP, Royal Dutch Shell, and other European energy companies are selling off oil fields, planning major carbon emission reductions, and investing billions in renewable energy. (By contrast, US giants Chevron and ExxonMobil have just tiny renewable projects and focus on traditional fuels.)

How well do renewable jobs pay? Although the data is spotty, there’s some evidence that workers’ compensation in renewables is comparable to that of carbon-centered jobs, at least in skilled trades. Take electricians: The Bureau of Labor Statistics (BLS) says worker compensation in solar industries is on par with similar positions in legacy energy, as well as other industries.

Biden’s just-enacted infrastructure bill and his social spending measure, now before the Senate, are aimed at bolstered the US’s decaying electrical grid, of help to all energy sources, whether from below the ground or above. And the persistence of fossil fuel availability should give renewable energy producers flexibility, should the wind wane or the sun not shine, while sufficient storage isn’t yet available, Trillium’s Levy points out. So, net-net, green jobs should keep on sprouting.