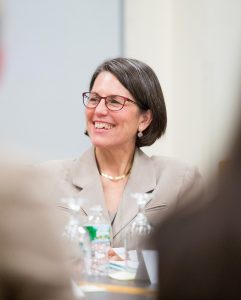 Sally Dungan speaking on the finance industry in 2016. Photo courtesy of Tufts University.

Sally Dungan, the CIO of Tufts University’s $2 billion endowment, died of cancer on April 12, the university announced. Dungan, who was Tufts’ first and only CIO, had been at the helm of the endowment since 2002 and had increased its size by nearly three-fold from $680 million. She is credited with establishing Tufts’ Investment Office, which manages the university’s endowment.

“Sally Dungan brought to the management of Tufts’ investments a true sense of mission, as well as consummate professionalism, always keeping in mind the role of our endowment to support academic excellence not just today but for generations to come,” Tufts University President Anthony Monaco said in a statement. “She was deeply respected by our trustees and her administrative colleagues as well as by the team she built and mentored, and we will miss her as both a colleague and a member of our community.”

In addition to setting up the infrastructure for the investment office, the university said Dungan successfully partnered with others to create policies and procedures to manage and oversee Tufts’ investments.

“Sally literally grew the office from scratch, to create an incredibly highly functioning, collegial enterprise,” said Steven Galbraith, chair of the investment committee of the university’s board of trustees. “She took immense pride in the quality and integrity of her team—and their devotion to the university.”

She was known as a strong advocate for education and mentorship and recruited analysts from among the university’s alumni as a way to encourage students to explore working in the field of investment management.

Prior to heading the endowment, Dungan served as the director of pension fund management for Siemens Corporation from 2000 to 2002 and was deputy CIO and senior investment officer of public markets for the Pension Reserves Investment Management Board of Commonwealth of Massachusetts from 1995 to 2000. Before that, she was administrative manager for Lehman Brothers from 1990 to 1995.

Dungan had also served on the boards of several public and private institutions, including the Eaglebrook School in western Massachusetts where her sons Joseph Henry and Bud (Samuel) Henry, attended school.

Dungan’s family has requested that donations in her honor should be made to the American Kidney Fund.

« Dogs of the Dow Get Bitten