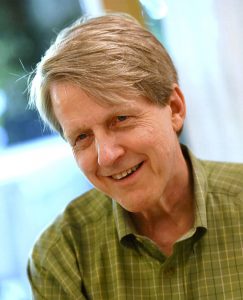 It’s unclear whether Robert Shiller is a Beatles fan. But his take on the duration of the coronavirus-driven economic distress evokes that lyric from the Fab Four: “Boy, you gotta carry that weight/Carry that weight a long time.”

Yale economics professor Shiller, a Nobel laureate, fears that the seemingly interminable length of the pandemic, which seems to have gotten worse lately, will mess with consumers’ heads. Outcome: The economic funk may drag on for years, due to the psychological damage it has caused.

Shiller is not alone in his dour take. Boston Consulting Group estimates the virus could obliterate as much as $16 trillion from global wealth this year, a 7% contraction—and stymie growth for five years going forward. By contrast, in 2008, the year of the financial crisis, wealth dropped $10 trillion, or 7.9% of the total.

The current virus spike might take an even heavier toll on the economy than we’ve seen this year, if business reopenings are abandoned, Shiller said. “Looks like we might be entering a second phase,” he told CNBC. “There might have to be closures again. It might have a worse psychological response the second time.”

And, aside from its health impact, a stubborn COVID-19 might convince people that this dire situation will persist forever, which could thwart business planning and public willingness to spend, Shiller warned.

The result, he said, might be a self-fulfilling prophecy where everyone hunkers down, a la the 1930s. Then, folks would feel they didn’t “have to keep up with the Joneses anymore,” Shiller said. “That might create a different kind of culture that would last for years that you don’t have to show the latest fashions and drive a spanking new car.” What follows would be “bad for the economy.”

Shiller, who made his name decrying the excesses of exuberant pre-2008 finances, has expanded his jeremiads in a new book, Narrative Economics, that charts how widespread beliefs drive the economy, sometimes for ill.

He expressed trepidation about the stock market’s buoyant behavior of late, so at odds with present economic and health realities. For now, Washington’s massive stimulus programs have soothed the market, he said. But what, he asked, would happen if the federal support goes away?

“People could easily think that it’s not essential to the economy, and it will soon be over,” Shiller said, referring to the pandemic. They don’t see how risky the state of play is, he indicated.

And still others aren’t. To UCLA economist David Shulman, the most recent quarter will see a 42% annual rate of decline in gross domestic product (GDP). After the second quarter, the professor said, the recovery will be very gradual and we “won’t return the level of output to prior fourth quarter of 2019 peak until early 2023.”

His second-quarter forecast is steeper than the 33.5% average that the Wall Street Journal’s survey of economists found for the current period. The Journal consensus calls for a bounce back in the third quarter, with GDP up 14.2%, and then a 7.5% increase in the October-December quarter.

Worse Than You Think: We’re in a Depression, Says UCLA Economist

« Support Grows for US Creating a Sovereign Wealth Fund