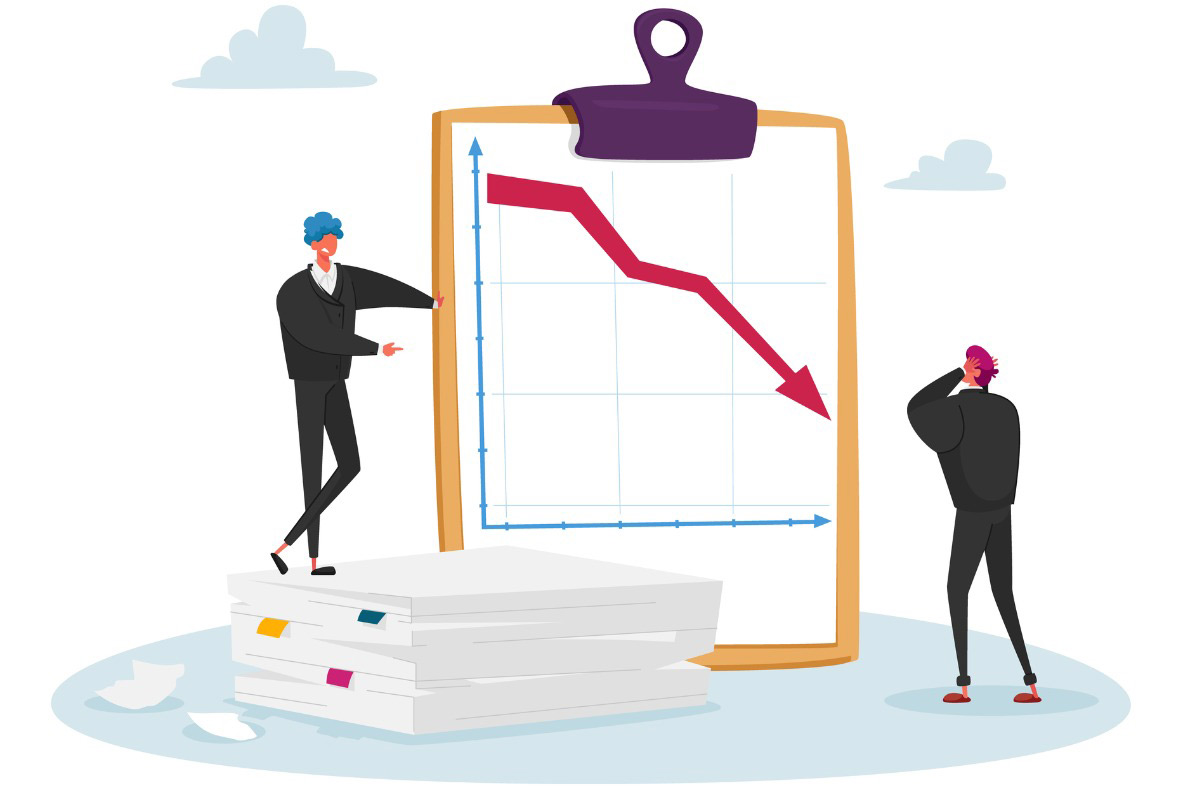 The Lord giveth, and the Lord taketh away. With apologies to the Book of Job, the same could be said for the soaring equities market. That’s the augury of some of the biggest Wall Street players, with downbeat previews for the rest of 2021.

The stock market may have reached record levels this year, but Thursday’s 0.86% drop in the S&P 500 could be a portent. Turns out that a batch of big-time prognosticators think we’re in for a downdraft or a plateau up ahead. Not helping: Historically, the third quarter (which we just entered) is always a relative laggard.

Market strategists at BlackRock, Goldman Sachs, RBC, and Morgan Stanley are among those concerned that a strong economy and the prospect of good earnings are not enough for the market to maintain its rally. As culprits in a coming slide or stasis, they point to inflation leeriness, the Federal Reserve’s possible tapering of its epic bond buying, and profit-margin pressures.

One ominous development that a lot of Wall Streeters are noticing is that the yield on the 10-year Treasury note is slipping. The benchmark bond closed Thursday at 1.28% annually, quite a drop from the 1.74% level March 31. Back then, spirits were more euphoric. Rising T-note yields often signal a rising stock market.

Asset manager BlackRock this week downgraded US stocks to neutral and opined that the reopening trade was largely played out in the domestic markets. Thus, in its view, the growth from the economic revival was peaking.

At Goldman, chief U.S. equity strategist David Kostin wrote that he expects the S&P 500 will end 2021 at 4,300, just a hair below what it closed at yesterday. He blamed obstacles such as possible loftier borrowing costs and higher federal taxes for the underwhelming forecast year-end 2021.

“Our economists’ expectations of higher interest rates and higher corporate tax rates by year-end are the primary reasons we forecast that the S&P 500 will trade sideways during the next six months,” Kostin wrote.

To Morgan Stanley strategist Michael Wilson, the stock market will take a break this summer. “The bottom line is that the US economy is booming, but this is now a known known and asset markets reflect it,” he wrote in a research note. “What isn’t so clear anymore is at what price this growth will accrue. Higher costs mean lower profits, another reason why the overall equity market has been narrowing.”

At RBC, strategists find that investor optimism has faded “a bit.” The spread of COVID-19 variants is serving as a reminder that the pandemic isn’t over yet, they said in a report. Such a pandemic increase could crimp demand, the firm said. It tempered this gloomy comment by pointing to the strong cash positions of companies and consumers, which could counteract any market weakness.

Of course, the pessimistic outlook is in keeping with the seasonal effect on equities. Namely, that the third quarter is usually the dog. Since World War II, the S&P 500 gained an average of only 0.5% in the July-September period, versus increases of 1.9% to 3.8% for the other quarters, according to Sam Stovall, CFRA’s chief investment strategist.

And July is the best month of the lot. Stovall wrote that “the typical market mayhem doesn’t materialize until August and September, leaving the S&P 500’s return reputation for July tainted by association.” By the same token, Stovall observed, a greater average of corrections and bear markets started in July than for all months of the year.

What’s more, the CFRA sage went on, over the past quarter century, eight of 11 sectors in the S&P Composite 1500 Index (which covers all capitalization sizes), as well as the Nasdaq 100 and S&P 500 Growth indexes, outpaced the S&P 500 in the third quarter. The outperforming sectors were led by health care, real estate (since 2007), and technology, while communication services, consumer discretionary, energy, and materials typically declined.